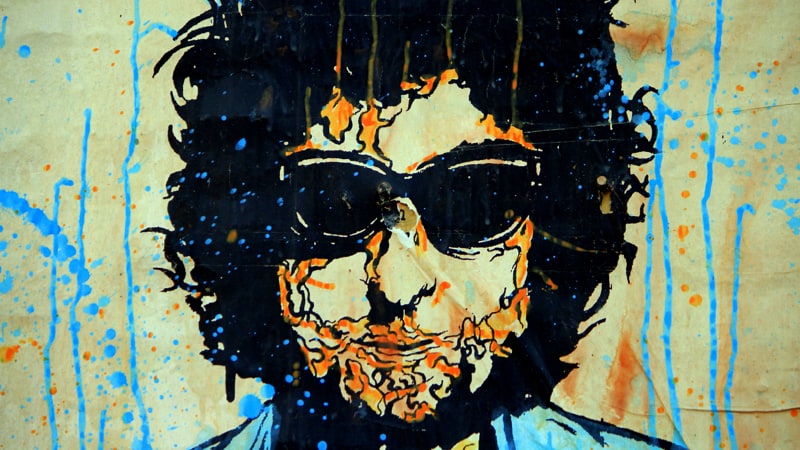 Amber lights appeared in patches, and as vintage lights slowly illuminated the stage, the restless crowd in Virginia State University’s Multi-Purpose Center moved to its feet in anticipation. A shadowy figure in a black suit with a bolo tie on an open collar came into focus, and everyone knew – this is BOB DYLAN, folks. There are likely very few that have made it to adulthood without knowing the legend’s name and one of his songs, whether it’s a more obvious rock-and-roll classic such as “Knockin’ on Heaven’s Door” or the most recent cover, by Adele, of his ballad “Make You Feel My Love.”

The show was on a frigid November night in Petersburg, Virginia, but there was no shortage of bundled-up concertgoers in the long lines that formed outside the doors. And for good reason: Dylan and His Band put on a truly dynamic show that was worth the wait and solidly energetic from beginning to end. His five-piece band of talented A-list players dressed in matching silver on black felt like a modernized ’60s throwback, and they were mysteriously joined on stage by a plaster bust of a woman in front, and a male mannequin dressed in a tuxedo in the back.

Dylan donned a Telecaster and joined guitar players Charlie Sexton and Bob Britt to start the show with a roaring rendition of “Things Have Changed” to a standing audience, and then moved into a retooled arrangement of his well-known “It Ain’t Me,” which has been covered by artists from Joan Baez to Johnny and June Carter Cash. Drummer Matt Chamberlain laid down the hard-driving rhythm for a rendition of “Highway 61,” with Dylan standing at the piano and the ever-versatile Donnie Herron moving from the fiddle to join in on pedal steel. The gritty blues riffs and wailing slide guitar of “Early Morning Kings” followed, pulling people out of their seats, then a haunting Irish-tinged “Girl from the North Country” slowed the pace with long-time bass player Tony Garnier pulling a bow across his upright.

The Grammy-winning artist moved frequently during the 100-minute show, trading the electric guitar for a piano or harmonica, and sometimes just standing with the microphone to sing his well-known lyrics. Some melodies had been vastly rearranged. “Not Dark Yet” caused a hush to fall over the arena, until the audience chimed in with “… but it’s getting there,” then the band kicked it back up with Dylan talk-singing – in his unique style – and playing lively honky-tonk riffs of “Thunder on the Mountain” on the spinet piano. He finished the show to a standing ovation, then returned for encore performances of “Ballad of a Thin Man” and “It Takes a Lot to Laugh, It Takes a Train to Cry.”

Concert reviews frequently express disappointment in the fact that Bob Dylan does not welcome his audience, talk to them or thank them. He, in fact, never uttered the first word, perhaps suggesting the truth that an artist is simply paid to perform – your ticket price does not buy their gratitude. However, every moment he spent on stage gave the crowd what they had paid for – a solid, moving performance. And he seemed relaxed – even smiling at some points – doing so.

As a songwriter who spent a decade in Nashville, this show was like medicine. Although I never considered myself a devoted Dylan fan, I left with an increased respect for what Bob Dylan does, and does well, in a live show. His insanely talented band was absolute salve for my heart, which has so badly missed the incredible talent and signature sound of Nashville, with its carefully curated mix of flawlessly combined country, rock, and blues.

The sheer longevity of the 78-year-old rocker as a performer is impressive, with a very heavy tour schedule currently until a break in mid-December, followed by a tour in Japan next year. These legends won’t be around forever, and this show was a reminder to take the time to see their work in person while we have the chance. Dust off those old records and give them another listen, and be reminded why Bob Dylan was awarded The Nobel Prize in Literature 2016 “for having created new poetic expressions within the great American song tradition,” or check him out live when he plays The Anthem in Washington D.C. on Dec. 8.