Home » From Our Readers » Boomer Train

The Legacy of the Boomer Train 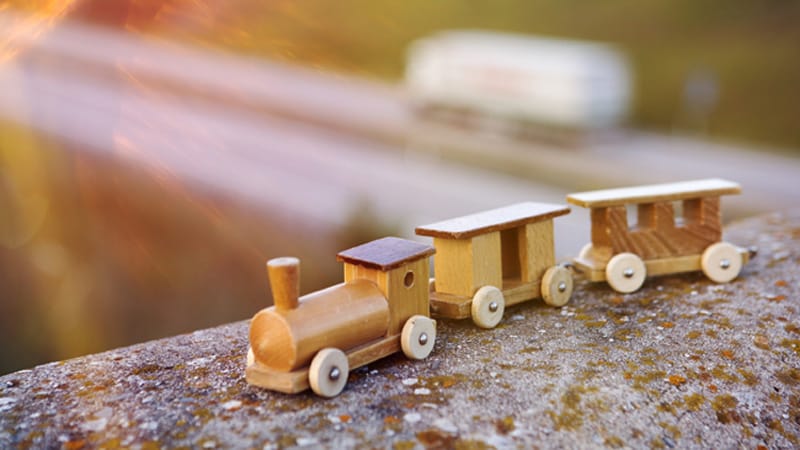 The legacy began in May 1957, with two boxes of rough cast iron undercarriage parts for a 7-½ inch gauge backyard railroad. A three-unit train required six four-wheeled trucks. These, with working couplers, meant 72 parts to be drilled and finished for assembly.

Three-fourths inch plywood in a 1-inch angle iron frame made the engine bed. On this 12′ x 44′ platform, I put a small gas engine, drive shaft with brake drum, speed reduction gear and final drive chain sprocket. I made the operating mechanism for a child operated go and stop automatic system.

A T-bar extended up our of the engine cab. A push on the T-bar opened the throttle, released the spring-loaded brake and the centrifugal clutch engaged the primary V belt drive. If the T- bar was pulled or released the engine brake grabbed, the clutch released and the motor idled.

The plywood engine I designed to resemble a C&O railroad diesel engine, including their blue and yellow colors. A black coal gondola car and a bright red caboose followed. The construction took a year of spare time. For railroad ties, treated, 12” 2 x 4’s were used. The rails required 600 feet of 3/4” x 3/4” T-shaped steel bars fastened to the ties with roofing nails. This made 300 feet of track circling our backyard pine trees in Sandston, Virginia.

Finally the word was out, and the fun began. Cheryl, my niece and her 2siblings lived next door to us, with our two boys. A dozen kids on our street added to the eager riders waiting their turn on weekends, the trains’ regular operating days. At suppertime, the kids left; all but Cheryl, who usually ignored several calls. There she would sit, holding the T-bar, going around and around until the call got serious. She drove the train more than any other kid. “Cowboys and Indians” was still a great theme then. Cheryl remembers our sons, Steve and Clint, would hide in the shadow of the garage and shoot the Indian riders as the train rounded the “goat yard” turn.

But most kids were content just to drive or ride. One Sunday afternoon, a bicycle arrived with a rider on the handlebars and towing a big wagon loaded with small eager train riders. The boomer train became a figure of joy and fun for all involved. It was a fair weather weekend ritual on Otey Lane from 1958 until 1970. We moved to the Rock family home place in Goochland and the train was stored in the old corn house. Cheryl helped us restore the home on many weekends.

In February 2016, as my 89th spring approached, I dreaded a summer without a project or anywhere to go. I sold my motorhome in October 2015, and now felt old and useless.

After a lunch excursion, Cheryl and I visited a toy store. She wanted a book for her grandson who loves trains. Paying for the book, she mentioned to the lady cashier our backyard railroad of her youth. As they talked and enthused about it, my old mind had an “aha” moment: why not bring it back to life and sell it? In the car I mentioned the idea and Cheryl liked it, but asked if I could handle the big task now. “We’ll see,” I replied, wondering myself.

March 2016 found me sitting on the sunny floor in the doorway of the corn house pulling the heavy trucks off of each unit. This began the disassembly of each and every part of the train, including all operating and driving gears. What a daunting pile of metal parts and nuts and bolts to be cleaned, scraped, degreased and repainted. The days and the work slipped by, and it was time for a renewed train to be assembled.

A clean, bare engine bed was soon crowded again with a new engine and all operating and driving gear. All running trucks looked new and each coupler worked with a beautiful paintjob. We now had a revived boomer train. Cheryl was ecstatic when I said that it was now her train, and that she was assigned chief engineer.

Cheryl and her husband Ronnie have a farm in Goochland. Ronnie had been captivated by the train since he first saw it. Quickly, he picked out a site on the large house lawn and outlined the 300-foot track with red flags. Within 10 days, Ronnie had 600 feet of new truck steel and 300 new 2×4 ties on site. On a hot Saturday morning, three eager grandchildren dropped 300 ties around the red flagged track path. A small window in the playhouse became a ticket window, and an old chalkboard displayed written rules for riders. A roll of real tickets appeared along with engineer and conductor caps. The railroad was named “The C and S Railroad” in honor of our sons.

The train was waiting only for a track. My son Clint and I welded the steel into long sections and dragged them over to Ronnie, who promptly nailed them to ties. He used my original track gauge to lay the track. The track ran behind the kids’ old playhouse, which was quickly converted into a station. Ronnie added a through train shelter to the back.

The first revived train driver was Cheryl. Her three grandchildren were jumping with joy and Cheryl stopped to let them get aboard. In short order, they were excitedly taking turns as engineer. We were all so pleased that the resurrected train was running again. Clint was also an original driver and rider on the train that morning. The track was well settled by grandchildren and visitors before a train party was held in July. Many people and lots of children enjoyed this day of celebrating the return of that much loved little train. Six of the original riders rode it again after over 46 years. But one sad moment: our first engine driver in 1957 was our dear oldest son, Steve. Sadly, we lost him in 2015.

Several other original riders have responded to Facebook, seeing pictures saying, “Yeah! I remember riding that train!” But the fun and laughter of so many children and adults that day, and since, has put a lot of joy in a crusty old marines heart.

Cheryl and Ronnie have been offered may thanks and much appreciation for their part in this endeavor. They both start the train up happily when new or previous riders arrive. The long ago joyous noise of that little train covered in happy kids still echoes in my mind. It was that motivation that drove four months of tedious labor.

Inherent innocence in children lets them express true emotions easily. We’ve heard many exclamations such as one little boy’s remark, “That’s the greatest thing I’ve ever seen!” Another small fellow was waiting to ride and Ronnie said it might not start. “That’s okay, it will be great just to sit on it.” One 5-year-old boy, an overnight visitor, enjoyed riding it so much that he found Ronnie in the morning and rode around and around by himself. And once, the vet was needed and brought her 3-year-old boy. His eyes lit up when he saw the train and exclaimed “A real train!” He got many rides before going home. His mother on another day asked him if he wanted to go with her on a call. He asked. “Do they have a train?”

Cheryl and Ronnie gave me a 90th birthday party this past June. The train was the center of the party, now in its second reborn season. My three grown-up grandchildren had their first rides with six of us originals.

What a happy legacy the boomer train enjoys. The chief engineer is now Cheryl’s 7-year-old grandson, John Mason. Grinning his snaggletooth smile and wearing his striped engineers cap, he drives on and on.