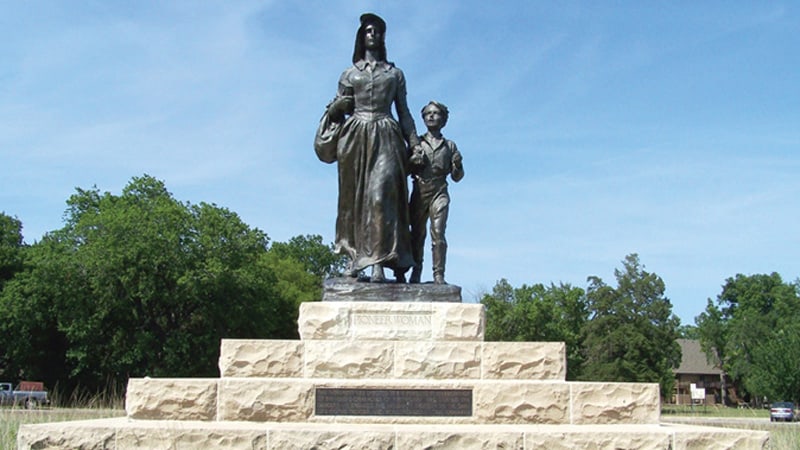 Since 1987, the U.S. Congress has recognized March as Women’s History Month. Monuments, memorials and museums recognize the significant roles and contributions that women have made to our nation. They pay homage to the past and provide inspiration for the future.

TAKE A PILGRIMAGE TO MEANINGFUL SITES

In the heart of Washington, D.C., the National Museum of Women in the Arts is blazing trails. Not only does the museum recognize the historic contributions of creative women, it also creates a living space for future thinkers, dreamers and innovators to imagine what may be possible. With concerts, film screenings, artist talks, gallery exhibitions and family-friendly community days, NMWA is a wonderful place for people of all ages to be inspired. NMWA.org

The first Women’s Rights Convention occurred in Seneca Falls, New York, in 1848. Today the city hosts the Women’s Rights National Historic Park of the National Park Service. Visitors stand on the hallowed ground marking the official beginning of the women’s movement in America. In the Wesleyan House, Elizabeth Cady Stanton, Lucretia Mott and their cohorts dared to envision a world in which women were seen as equal to their male counterparts. In addition to the historic sites, there are also many nearby natural wonders, lakes, water trail activities and more that make this a great location for a week in the country. NPS.gov/wori/index.htm

While in Seneca Falls, take a trip to the National Women’s Hall of Fame, which touts itself as “the nation’s oldest membership organization dedicated to honoring and celebrating the achievements of distinguished American women.” Since 1969, 266 incredible women have been inducted into the Hall, from Bella Abzug to Maya Angelou to Shirley Chisholm. WomenOfTheHall.org

In Ponca City, Oklahoma, anchored by the famous 17-foot-tall statue of a fierce, resolute woman looking west, is the Pioneer Woman Museum. Women played integral though often overlooked roles in the westward expansion undertaken by thousands of American families in the late 19th and early 20th centuries. The statue was unveiled in 1930, “dedicated to the enduring spirit of women – past, present, and future – who see no boundaries,” particularly in Oklahoma. At the museum, visitors learn through craft projects, exhibitions, tours and the Pioneer Women Walk of Fame. OKHistory.org/sites/pioneerwoman

There are a number of new projects across the country continuing the growth of women-focused museums and monuments. In Sarasota, Florida, the Women’s Sports Museum is in the fundraising stage of the creation of a new space committed to honoring the athletes who have been changing perceptions of women for decades. WomensSportsMuseum.org

Back in Washington, D.C., the National Women’s History Museum is also in its early stages. In the center of our nation’s capital, this museum will sit among great historic monuments honoring American men and act as a reminder of the many women who stood alongside them, in opposition to them and at times in spite of them to make their mark. NWHM.org

INSPIRATION IN OUR OWN BACKYARD

Groundbreaking for the initial phase of the Virginia Women’s Monument was held in Richmond’s Capitol Square on Dec. 4, 2017. Also called Voices from the Garden, the monument will honor 400 years of contributions by lesser-known women such as Cockacoeske, the 17th-century Pamunkey leader, as well as local icons such as Maggie Walker. The project seeks to highlight women from diverse backgrounds and geographic locations across the state to “acknowledge the genius and creativity of Virginia women and their presence and contributions to the Commonwealth.” WomensMonumentcom.virginia.gov

While touring the historic sites of Richmond, make a stop at the home of a historic banker, philanthropist and champion for equality. The Maggie L. Walker National Historic Site in Jackson Ward at 110½ E. Leigh St. is operated by the National Park Service and open for tours. NPS.gov/mawa/index.htm

The birthplaces and childhood homes of some renowned women can be found throughout the commonwealth. The Edith Bolling Wilson Museum in Wytheville was the birthplace and early home of the first lady of President Woodrow Wilson. She earned the moniker “The Secret President” because of her role behind the scenes of the presidency after her husband’s stroke in 1919. EdithBollingWilson.org

A lesser-known historic site is the Workhouse Prison Museum at Lorton. The Women’s Workhouse, opened in 1912, initially held women for crimes such as public drunkenness and prostitution. However, in 1917, when women began protesting for the right to vote, the suffragists were often arrested and sent to the workhouse to suffer harsh conditions. This imprisonment had the unintended consequence of gaining sympathy for the women, which they used to their advantage as a way of drawing attention to their cause. In a new exhibit titled Struggle at the Workhouse, visitors are invited to better understand the difficult circumstances faced by the suffragists imprisoned there. WorkhouseMuseums.org

There are hundreds of sites across the nation acting as reminders of the incredible impact women have been making for centuries. For more information on America’s historic women and Women’s History Month, visit WomensHistoryMonth.gov.

Erin Mahone is a wife, mother of three, writer and storyteller. She is the author of #IfYouCouldSeeMe: Life, Motherhood, and the Pursuit of Sanity. She presents a one-woman show about life, laughter, mental illness and love, titled “It Runs in the Family,” and invites others to share their stories. IfYouCouldSeeMe.com