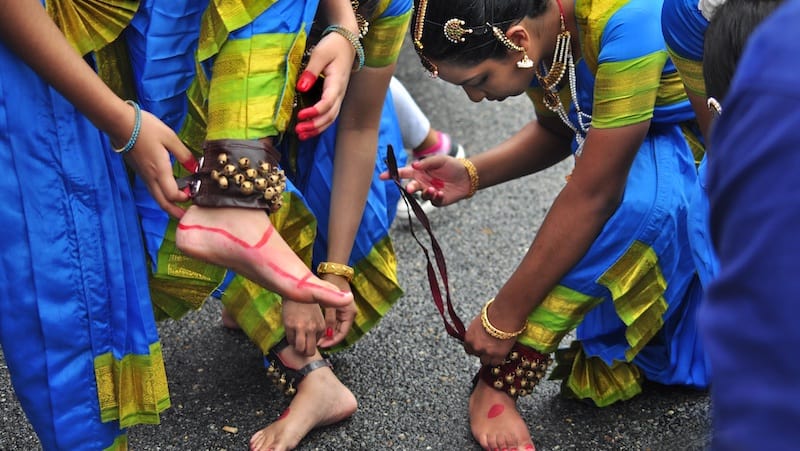 A photograph is a snapshot in time, capturing a moment. But a skilled photographer reveals dimensions beyond the picture. Bring together several photographers in a shared mission, and the dimensions expand exponentially. Columbia Pike: Through the Lens of Community, at the Library of Virginia (Aug. 31, 2021 to Jan. 8, 2022), captures multiple dimensions. The exhibition presents the values of one place, in space and in time – the people, diversity, the changes, and an uncertain future.

The exhibition showcases more than 70 images from around the Arlington County community along Columbia Pike. Each photograph is itself a work of art. Together, they celebrate this small slice of Northern Virginia. To contribute to the message, the exhibition adds relevant historical background and resident interviews.

The background – the lobby

A good starting point for taking in the Columbia Pike exhibition is the library’s lobby, to the left as you enter. Displays along this wall give an overview of the pike’s history.

You’ll learn of the first electric railway in Northern Virginia, of the initial development and growth of the area.

You’ll learn when the diversity began to blossom. First, in the 1970s, an influx of Vietnamese, Laotian, and Cambodian refugees arrived, and the county’s foreign-born population nearly doubled. In the 1980s came a wave of refugees from Central America and the Middle East, fleeing violence and civil war. The 1990s brought East Africans escaping political violence, and a variety of other immigrants: 7,800 immigrants from more than 120 countries.

You’ll learn that the diversity of Arlington County, where more than 130 languages are spoken in the county, is concentrated along the Columbia Pike corridor. And you’ll see that this diversity is embraced, not scorned.

“This is what peace looks like. People get along. This is how we should be,” says photographer and Arlington resident Lloyd Wolf

Recognizing the exceptionalism of their community, Wolf, his longtime collaborator, Paula Endo, and her husband, Todd Endo, decided to document it. They began the Columbia Pike Documentary Project in 2007 and added more community photographers to the fold: Duy Tran, Xang Mimi Ho, and Aleksandra Lagkueva – along with community art activist Sushmita Mazumdar.

Like the neighborhood, the Columbia Pike Documentary Project team members represent a variety of backgrounds. The diversity came naturally, because of the makeup of the community, Wolf told me at a Library of Virginia preview of the exhibition. The team began photographing people, buildings, places, and events. Many of these have been compiled into two books: Living Diversity (published in 2015 and available on Amazon) and Transitions. Both are available in The Virginia Shop at the Library of Virginia.

The project contributed several thousand of their photographs to the Library of Virginia’s special collections earlier this year, with more to come. Approximately 70 of these images are highlighted in the library’s first-floor exhibition gallery – the heart of the exhibition.

Photographs punctuate the exhibit’s back wall, mostly of people, some of buildings – or demolitions. The photographs chosen for this exhibit show the wondrous diversity of Columbia Pike. Several were taken during the Bolivian Carnaval de Oruro festival, the Prio Bangla multicultural street festival, and the Columbia Pike Blues Festival. They highlight cultural traditions as well as the harmony of disparate festivalgoers.

On the walls and columns opposite the photographs are words and pictures of a variety of residents, both immigrants and people born and raised in Arlington. Their words bring to life the stories behind the celebrated community.

“People who move to South Arlington know what they’re getting,” says Maria “Pete” Durgan, native of South Arlington. “They want their kids to have the experience of all the ethnicities in their schools. They like the fact that you’re in this kind of big ole melting pot of all kinds of people, and it’s cool that we all get together and hang out the way we do.”

“The diversity that we have in Arlington is what makes it a great community,” says Janeth Valenzuela, who immigrated from Bolivia in 1988. “We share different cultures, and it is teaching us to be better human beings … If we all work together, we’re going to create a better place for everybody.”

The photographs and the residents’ words also raise the specter of an uncertain future. Even the best photographer can’t capture the future. And even the most experienced, astute residents may differ on what’s to be.

Joan Mulholland, native Arlingtonian, octogenarian, and Civil Rights activist extraordinaire beginning in the 1960s, points to the existence of new, larger houses (“McMansions”) in a neighborhood that had been dominated by more modest homes; to the lost diversity of income levels and professions and of small and independent businesses – in short, to gentrification.

Another resident, Adam Henderson, describes it as “a place that is on the cusp of becoming great.” As president of the Douglas Park Civic Association and chair of Pike Presidents Group, Henderson expressed a need for the area to become more self-sustaining – keeping diversity and affordability while bringing in economic benefits.

The richness of the exhibition – and of the photographs displayed without editorializing – leave room for interpretation. They share the spirit of the place while allowing all viewers to come away with their own message: diversity, adaptation, love, life, change, harmony, history, photographic artistry, cultural heritage, future uncertainties …

Or then again, your lens might capture something entirely different. Like Columbia Pike itself, the diversity is welcome.

Columbia Pike: Through the Lens of Community
Through Jan. 8, 2022
Library of Virginia
800 East Broad St., Richmond

Besides working and writing for Boomer and Seniors Guide, editor Annie Tobey regularly flexes her freelance muscles by writing for numerous local and national publications. Her passions range from justice, truth, and compassion to pleasure – specifically craft beverages and active travel. Annie’s slogan? A breeze on my face and a draft on my lips.