The atrocities of a war against ‘many good people’ 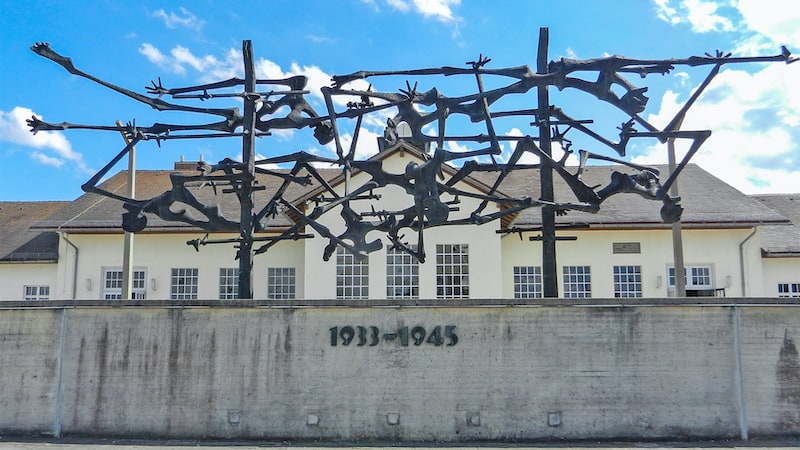 Travel writer Rick Steves takes us through the Dachau concentration camp and introduces us to a German woman who father was also killed during the way. Her father was one of ‘many good people,’ as were those taken to Dachau, where visitors are reminded: “Forgive, but never forget.”

En route to Dachau’s infamous concentration camp, I sit next to an old German woman on the city bus. I smile at her weakly as if to say, “I don’t hold your people’s genocidal atrocities against you.”

She glances at me and sneers down at my camera. Suddenly, surprising me with her crusty but fluent English, she rips into me. “You tourists come here not to learn but to hate,” she seethes.

Pulling the loose skin down from a long-ago strong upper arm, she shows me a two-sided scar. “When I was a girl, a bullet cut straight through my arm,” she says. “Another bullet killed my father. The war took many good people. My father ran a Gruss Gott shop.”

I’m stunned by her rage. But I sense a desperation on her part to simply unload her story on one of the hordes of tourists who tramp daily through her town to gawk at an icon of the Holocaust.

She explains that in the Bavaria region of Germany, shopkeepers greet customers with a “Gruss Gott” (“Praise God”). During the Third Reich it was safer to change the greeting to “Sieg Heil.” It was a hard choice. Each shopkeeper had to make it. As more and more shops became Sieg Heil shops, everyone in Dachau knew which shops remained Gruss Gott shops. Pausing, as if mustering the energy for one last sentence, she stands up and says, “My father’s shop was the last Gruss Gott shop,” then steps off the bus.

By the end of the line there are only tourists and pilgrims on the bus. Together, in silence, we walk into the concentration camp.

Dachau, founded in 1933, was the first concentration camp – a model camp and a training ground for wannabe camp commandants who studied such subjects as crowd control and torture. The camp at Dachau was built to hold 5,000, but on Liberation Day 30,000 were found packed inside its walls. Some 3,000 were so sick that they died after liberation. The number of Dachau deaths is estimated at 40,000, but the total will never be known. Thousands of Russian soldiers were brought here as prisoners. Not even registered, they were simply taken into the field and shot.

I shuffle into the camp’s memorial theater. It’s filled with 300 people, mostly tourists who are pilgrims for the morning. They sit in silence, looking at black-and-white film clips of tangled bodies and ghostly faces of the dead. As the camera pans silently across the corpses, gasps emanate from the audience. A frothing Hitler stands high, his hand waving furiously at the adoring masses. Even on the scratchy newsreel clips, he seems strangely charismatic, not dead but only hiding.

After leaving the theater, I wander through the museum. It shows how, under Hitler, Germany’s prison system overflowed. A network of concentration camps provided a solution. Standing before the chart of the camp system network, I see that fascist banality of evil, an integrated circuit of cruelty and misery. When you arrived, you passed under the “Arbeit macht frei” (“Work makes you free”) sign. You traded your property, rights, and human dignity for a number, tattooed on your wrist. You would never hear your name again … only your number.

No one had the right even to hope. During sick parade, the ill and infirm were beaten and ridiculed in public each evening. A photo shows a Jewish violinist forced to serenade the execution cart as his friend was paraded to his death. The eyes of the German guards are scratched out.

When Dachau was finally liberated at the end of the war, the camp was a scene of chaos, dead bodies, and desperation. At the sight of this misery, battle-hardened American soldiers broke down and wept.

Dachau concentration camp is both a barbed-wire box of memories and an eternal flame for the future. The sound of hushed voices and sad feet on the pebbled walk seems to promise remembrance while the breeze whispers “never again” through trees that stand on the parade ground where inmates once stood. A statue, as big as the train cars that brought in the inmates, marks the middle of the camp. It’s a black steel tangle of bodies – like the real ones found woven together at the gas-chamber door. At its base, in French, English, German, Russian, and Hebrew, is the wish of the survivors: Forgive, but never forget.