From the castle to the whisky, the Scottish capital is worth a visit 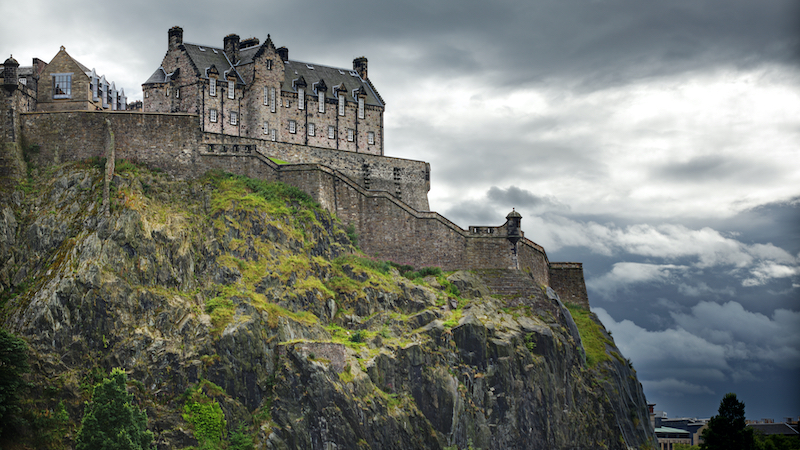 With a colorful and sometimes grimy history, Edinburgh, Scotland, offers a rich look at the passage of Scottish time. Travel writer Rick Steves guides readers through the historic castle and capital city, with tips on must-sees and must-dos on a visit.

Edinburgh is the cultural heart of Scotland. Once a medieval powerhouse stretching below its mighty castle, today it’s one of Europe’s most lively and festive cities.

Scotland’s capital has two distinct halves: a medieval old town and an 18th-century new town. Weather blows in and out – bring your sweater and be prepared for rain. Locals say the bad weather is one of the disadvantages of living so close to England.

This city was a wonder in the 17th and 18th centuries. It was famed for its skyscrapers – they say the first anywhere – but also for its filth. Four hundred years ago, Edinburgh was nicknamed “Auld Reekie.” The entire city was a black-stained mess of chimneys and “reeked” of smoke.

High above everything sits the fortified birthplace of the city – Edinburgh Castle. While the castle has been both a fort and a royal residence since the 11th century, most of the buildings today are from its more recent use as a military garrison. Come here to see Scotland’s crown jewels, Royal Palace, Scottish National War Memorial, St. Margaret’s Chapel, and an excellent National War Museum.

The castle is the beginning of Edinburgh’s Royal Mile – one of Europe’s most interesting historic walks, which leads through the old town down to the Palace of Holyroodhouse. The Royal Mile is actually 200 yards longer than a mile –and every inch is packed with shops, cafés, and lanes leading to tiny squares. Although it’s overrun with kitschy tartans and tourists slaloming through postcard racks, by poking down the many side alleys, you’ll find a few surviving rough edges of a sophisticated old town.

Take a short detour off the Royal Mile to visit the National Museum of Scotland. It offers a best-anywhere hike through the history of Scotland. Start in the basement and work your way up through time: prehistoric, Roman, Viking, the “birth of Scotland,” Edinburgh’s witch-burning craze, clan massacres, all the way to life in the 21st century. After a couple of hours here, soaking up the Industrial Revolution and an amazing confluence of philosophers and inventive geniuses (from great reformers like John Knox, to the first guys to whack a golf ball, to the father of capitalism, Adam Smith), you’ll marvel at how tiny Scotland punches so far above its demographic weight.

If you prefer getting your history from a live guide, try one of Royal Mile Tours’ walking tours, which take you the length of the Royal Mile.

At the top of the Royal Mile, there’s a touristy whisky-tasting experience that even includes a ride in a big whisky cask. I think of it as “Malt Disney.” Near the bottom of the Mile, there’s a place that bottles whisky (the Scottish drop the “e,” the Irish keep it) for connoisseurs – Cadenhead’s Whisky Shop.

When I visited, the shopkeeper pointed to a rack of famous-name whisky bottles. He told me the distillery owners who produce these – with their names on the bottles – dearly love their whisky. But they don’t drink it from those bottles. (“It’s all been purified, colorized, and standardized for the mass market.”) Walking me across the room to a shelf of aged wooden casks, the Scotsman explained, “They drink it in the rough, out of casks like these. It’s like getting your milk straight from the farmer.”

He drew a wee dram for me, and I tasted it. Whoa! Then he poured a little spring water on it. Squinting into the glass, he coached me along: “Look at the impurities gathering in a happy little pool there on top … the water is like a spring rain on a garden … it brings out the character … the personality.”

In Edinburgh, locals are passionate about finding and describing the whisky that fits their personality. Each guy in the pub has “his” whisky. And the descriptors (fruity, peppery, peaty, smoky) are much easier to actually taste than their wine-snob equivalents. Sipping this whisky with an expert, I see how Scotland’s national drink can become, as they’re fond of saying, “a very good friend.”

While the city can be intoxicating any time of the year, if you’re coming in late summer, enjoy one of Europe’s great cultural extravaganzas – the annual Edinburgh Festival. There are enough music, dance, drama, and multicultural events to make even the most jaded traveler giddy with excitement (generally a couple weeks in August.

But the most authentic evening out might be settling down in a pub to sample the whisky while meeting the natives … and attempting to understand them through their thick Scottish accents. It’s what makes Edinburgh one of my favorite destinations – a city with a great story and a knack for sharing it.

PHOTO CAPTION, ABOVE: The Greek theater in Taormina: With a view like this, no play is a tragedy. CREDIT: Rick Steves’ Europe.