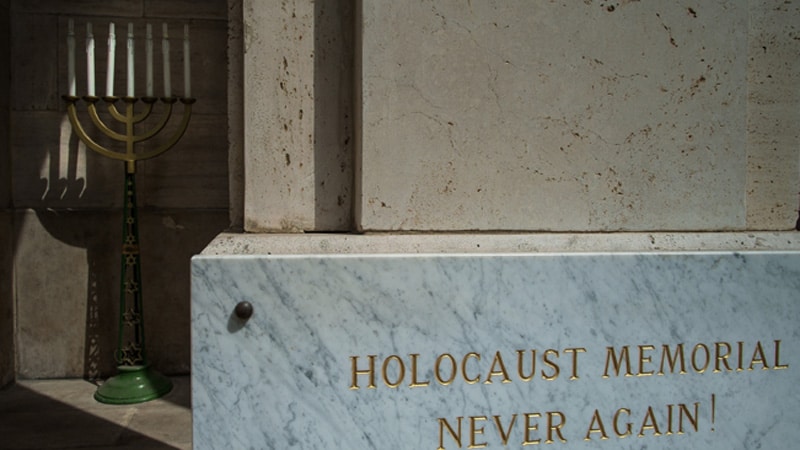 Emek Sholom Holocaust Memorial Cemetery has existed, in the shadow of the crematory chimneys of Forest Lawn Cemetery, since 1955 – yet few in Richmond are aware of its presence.

It was founded by a group of immigrants and survivors of the Nazi purge of European Jewry who had begun to start new lives in Richmond. Wanting to remember their “Loved ones who died in Europe 1933 – 1945 as victims of their faith,” they pooled their meager resources to place at the cemetery what became the second earliest memorial to the Holocaust in North America. In 1998, the Virginia Department of Historic Resources recognized its uniqueness and listed it as a Historic Landmark in Virginia, and the U.S. Department of the Interior placed it on the National Register of Historic Places.

Now, Emek Sholom has expanded its territory and its link to Richmond to include in addition to those who perished, also Richmond’s survivors, resisters and rescuers of Jews, and local military personnel who liberated the concentration camps and death marches in WWII. Thus, the full story of Richmond’s connection to the Holocaust will be told.

The search for names has begun. If you know of someone who lives or lived in Richmond who (1) worked with the Resistance or who sheltered or rescued Jews, or (2) a WWII veteran who participated in the liberation of a concentration camp, labor camp, ghetto or death march, please contact: by telephone: 804-358-2720 or by email: haringew@comcast.net.

The public is invited to a ceremony at the Emek Sholom Holocaust Memorial Cemetery on Sunday, Nov. 12 at 2 p.m. This annual event, the Kristallnacht Memorial service, commemorates the night of broken glass which signified the point of no return of the Holocaust, November 9, 1939. The program theme, “Never Again!” will be addressed by Rabbi Dovid Asher and Mr. Marvin Rosman. Also, honoring the memory of former board member, Esther J. Windmueller, an essay addressing anti-Semitism will be read by recipient of the “Never Again Award.”

High school students are invited to submit their essays by deadline, Oct. 31 at 6 p.m., to racheltloria@gmail.com. Details about the $300. “Never Again Award” may be found at holocaustcemetery.org.