Like a 3-D stroll through an art history book 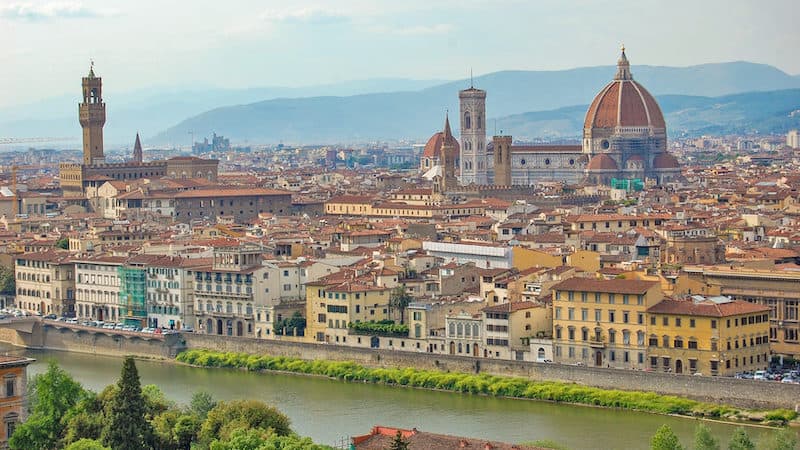 Travel writer Rick Steves takes us to Italy to highlight some of Florence’s many classical masterpieces, from Michelangelo, Botticelli, Raphael, Giotto, Donatello, Titian, Leonardo, and more.

As we’ve had to postpone our travels because of the pandemic, I believe a weekly dose of travel dreaming can be good medicine. Here’s one of my favorite European memories from Florence – a reminder of the artistic wonders that awaits us at the other end of this crisis.

After my first day in Florence, I remember thinking, “I’ve seen more great art in a few hours than many people see in a lifetime.”

Geographically small but culturally rich, Florence is home to some of the finest art and architecture in the world. In that single day, I looked Michelangelo’s David in the eyes, fell under the seductive sway of Botticelli’s Birth of Venus, and climbed the first great dome of the Renaissance, which gracefully dominates the city’s skyline today as it did 500 years ago.

After Rome fell in AD 476, Europe wallowed in centuries of relative darkness, with little learning, commerce, or travel. Then, around 1400, there was a Renaissance: a rebirth of the culture of ancient Greece and Rome. Starting in Florence, it swept across Europe. Wealthy merchant and banking families – like the Medici, who ruled Florence for generations – showed their civic pride by commissioning great art.

The powerful message of David

With the Renaissance, artists rediscovered the beauty of nature and the human body, expressing the optimism of this new age. The ultimate representation of this: Michelangelo’s David. Poised confidently in the Accademia Gallery, David represents humankind stepping out of medieval darkness – the birth of our modern, humanist outlook. Standing boldly, David sizes up the giant, as if to say, “I can take him.” The statue was an apt symbol, inspiring Florentines to tackle their Goliaths.

Until 1873, David stood not in the Accademia, but outside Palazzo Vecchio, the former Medici palace and now Florence’s City Hall. A replica David marks the spot where the original once stood. With goony eyes and a pigeon-dropping wig, this David seems dumbfounded, as tourists picnic at his feet and policemen clip-clop by on horseback.

The masterpieces of the Uffizi Gallery

Next door to the palace were the Medicis’ offices, or uffizi. Now the Uffizi Gallery holds the finest collection of Italian paintings anywhere, sweeping through art history from the 12th through 17th centuries, with works by Botticelli, Raphael, Giotto, Titian, Leonardo, and Michelangelo. In the long, arcaded courtyard, a permanent line of tourists (who ignored my guidebook’s advice to book reservations online in advance) waits to buy tickets.

For me, a highlight of the Uffizi is Venus de’ Medici. Revered as the epitome of beauty, Venus is a Roman copy of a 2,000-year-old Greek statue that went missing. In the 18th and 19th centuries, wealthy children of Europe’s aristocrats made the pilgrimage to the Uffizi to complete their classical education. They stood before the cold beauty of this goddess of love and swooned in ecstasy.

Classical statues like this clearly inspired Sandro Botticelli, my favorite Florentine painter. His greatest paintings, including the Birth of Venus, hang in this gallery. According to myth, Venus was born from the foam of a wave. This fragile Venus, a newborn beauty with flyaway hair, floats ashore on a clam shell while flowers tumble in slow motion. For me, Botticelli’s Birth of Venus represents the purest expression of Renaissance beauty.

More of Florence’s many classical masterpieces

In Florence, art treasures are everywhere you turn. The small, uncrowded Bargello Museum features the best collection of Florentine sculpture anywhere, including works by Michelangelo, Donatello, and Ghiberti. And hiding out at the underrated Duomo Museum, you’ll see one of Michelangelo’s Pietas (which he designed as the centerpiece for his own tomb) and Ghiberti’s Gates of Paradise panels. Revolutionary in their realism and three-dimensionality, these panels were created in response to a citywide competition in 1401 to build new doors for the Baptistery.

Across the street from the Duomo Museum towers Florence’s famous cathedral. Gaping up at the first great dome built in Europe in more than a thousand years, I celebrated the structure that marked the start of the architectural Renaissance.

After a day filled with so much great art, I retreat to a stately former monastery and unwind in a Renaissance-era cell. It’s my favorite Florentine hotel, Loggiato dei Serviti, and that cell is my bedroom.

Directly across from my window is the Accademia, filled with tourists clamoring to meet David. The peaceful courtyard in between is gravelly with broken columns and stones that students are carving like creative woodpeckers. I hear the happy chipping and chirping of their chisels gaining confidence, cutting through the stone. Five centuries later, it’s comforting to know that the spirit of the Renaissance remains alive and well in Florence.