A reflection on her amazing Hollywood journey 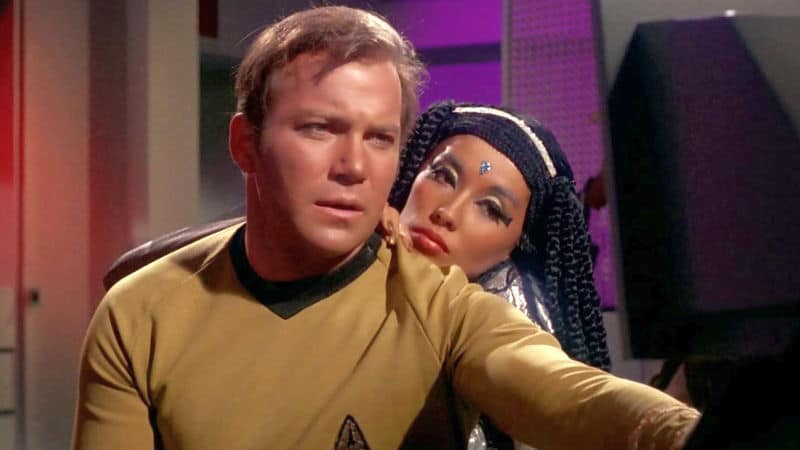 France Nuyen remains astonished not only by her successful Hollywood career, but by her very survival.

Turning 80 last year, Nuyen is still beloved by Star Trek fans for her role of Elaan, the obnoxious princess Captain Kirk attempts to tame in the third season episode “Elaan of Troyius.” But her journey to the ’60s classic sci-fi series and Hollywood almost never happened.

Born in France, she was abandoned by her father and still remembers the harrowing days growing up in her occupied homeland.

“There were times we only had beans or lentils to eat which the merchants mixed with dirt so they would weigh more when we bought it,” she recalled from her home in Beverly Hills. “At the end of the war, my mother weighed only 38 kilos with eyes sunk into her face. To make matters worse, she looked Jewish so the Gestapo was always harassing her. It’s an absolute miracle I’m alive, much less became an actor.”

As a teenager, Nuyen moved to New York with her mother and was working for a top modeling agency in the 50s when she was discovered and given a small role in 1958’s musical “South Pacific” playing a barefoot island girl.

Joshua Logan, the film’s director, immediately went on to direct the Broadway production of “The World of Suzie Wong” and wanted Nuyen for the title role. It ran for over 500 performances from 1958 to 1960 and co-starred a young Canadian actor named William Shatner.

“He was very professional and eager to make a career for himself,” she recalled. “I still only spoke French and just memorized my lines in English; Shatner and I had very little communication off stage because his French was Canadian. That was really a foreign language to me.”

STEPPING ONTO THE ENTERPRISE

Although she never worked on Broadway again, Nuyen appeared in numerous films and TV shows. That included with Shatner again a decade later in Star Trek.

“Playing the spoiled alien princess was a role that had authority and rage; I was throwing knives around the set! Quite different to other parts I had played and opened up a new range of acting emotions for me,” she explained. “I must have done a good job because I’ve met people who think I’m really that kind of person!”

“He did miracles with a tiny budget making clothes out of plastic table placemats,” she recalled. “He cut them into squares and put glitter on one side so when they were clipped together it looked like metal. But they looked beautiful and expensive.”

Later in life, Nuyen earned a degree in psychology; she worked with abused children, prisoners, and veterans.

“It was a tremendous enrichment of my mind and heart to help people who were neglected by society,” she said; she credits her own early hardships for creating the desire to help others and shape the person she became.

“I was born the day France declared war on Germany and that’s how I got my name,” she added. “The priest in my town baptized all the children born that day – boys and girls – ‘France.’ My name is my precious possession that symbolizes survival and the spirit of freedom.”

Nick Thomas teaches at Auburn University at Montgomery in Alabama and has written features, columns, and interviews for over 800 newspapers and magazines.