David L. Robbins writes about his experience with The Mighty Pen Project. 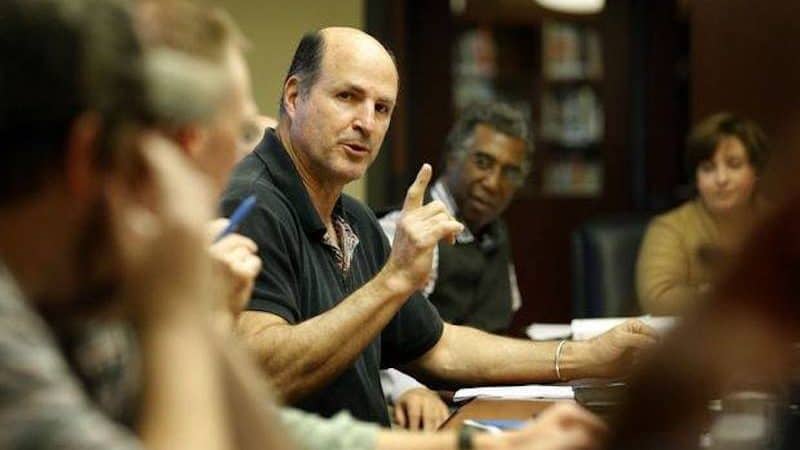 I arrived at the Virginia War Memorial 15 minutes early.

All day, I’d been apprehensive about how to teach writing to a room full of veterans. I had not served in the military, though I come from a lineage of servicemen and women. My mom and dad at Pearl Harbor, uncles in the Pacific, brother in Vietnam, cousin in the Israeli army. But not me. When my time came, 18 years old in 1972 with a draft number of 11, Dick Nixon ended the war months before I was called up. I didn’t have to go. And without compulsion, I didn’t. Lieutenant Calley, Kent State, peace symbols, Bob Dylan, someone’s spit on returning soldiers, all the anti-war zeitgeist of the ’70s convinced me to let go of my childhood desire to wear the uniform. That’s not an excuse, just an explanation.

BRINGING OUT WHAT IS INSIDE

What would I say to them, the vets? We were embarking on a semester-length, intensive, university-level instruction on writing, the same class I teach at Virginia Commonwealth University’s Honors College. But these weren’t going to be kids gathered for my wisdom and techniques. These were soldiers, sailors, airmen, Marines.

So I arrived, as I said, early.

Immediately, I knew this was going to be a different pedagogic journey for me. I entered the room at the Virginia War Memorial, my partner in this community venture we call The Mighty Pen Project, to find the board table full. In the doorway, I stopped, stunned. Someone barked: Military! Fifteen minutes early is 15 minutes late!

Love and fear at first sight.

I took my seat at the head of their table, unsure I belonged there. I welcomed them, introduced myself, then took the leap. I told 15 veterans that we were not gathered for healing or catharsis. We’d come together for the purpose of becoming better writers. If therapy was what they needed, that was available elsewhere.

But if they had a memory they wanted – or needed – to turn into a narrative, if they bore something infinite they desired to make finite, they’d come to the right place. Perhaps something powerful, something sad, was locked inside them. I would do my best to provide them the skills, practice and confidence to write it down.

Catharsis and healing were not destinations, but they would be inevitable stops along the way. Writing is a healing act.

I will truly never forget how they introduced themselves around the table. A Silver Star recipient who’d saved his unit in Vietnam 48 years ago by the deaths of children manning a machine gun. He said he needed to understand it. A sergeant major who described 30 years of numbness, and it was wearing off. A Marine with 80 percent casualties in his unit, then a problem with violence and liquor on his homecoming from Fallujah. The first female Navy combat photographer, who said her worst enemies were the men who claimed she couldn’t do the job. A Special Ops major with a long combat record, already a brilliant writer, with the desire to get better. A philosophy professor who crash-landed a glider on D-Day. Fifteen veterans, each with an unforgettable story. And they brought them to me.

After a few weeks, a delegation approached me after class. They said they knew I’d wanted to serve, and had not. They explained I would have been just another soldier, nothing special, probably in the brig. The Mighty Pen was how I was serving my country, honoring the uniform.

I don’t know if they were aware they were forgiving me, but I felt absolved. Later, the class honored me with an engraved brick laid in the walkway at the War Memorial.

I’d set out to change them, not the other way around. Laughable, how wrong I got that. The brig, indeed.

The class continues. If you are a Virginia vet with a story to tell or you know of one, please check the Virginia War Memorial’s website to apply. Or look us up on Facebook. The Mighty Pen Project is ongoing, year-round, and free.

Best-selling author David L. Robbins is founder of the James River Writers, co-founder of The Podium Foundation and creator of the Mighty Pen Project for veterans. Read more of his columns and his reflections on life.