Home » From Our Readers » High School 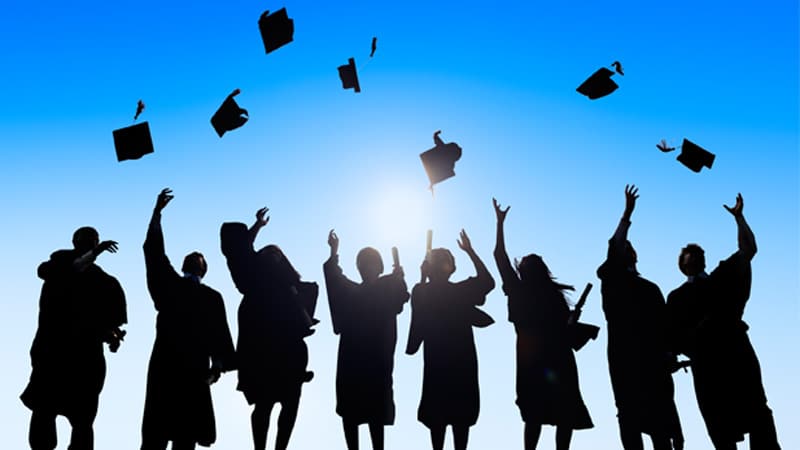 Recently, I was privileged to attend the graduation of two grandchildren from high school: Claire from Douglas S. Freeman High School, and Jordan from Hanover High School.

About a week later, I realized that their graduations were 60 years to the month after my high school graduation in 1957. And, when I really got to think about it, I determined that much has changed in public education during the last 60 years. Well, duh? But, when I started to compare, in my mind, some of the differences of our high school experiences, several things jumped out at me.

Before I discuss them, let me tell you about my high school, Erasmus Hall High School, in Brooklyn, NY. It opened its doors in 1786; yes, just 10 years after that more famous date of 1776. We have a few (understatement here) famous alums, including Bobby Fischer, Beverly Sills, Barbara Stanwyck and Barbra Streisand, for starters. It was considered to be one of the best high schools in the city. None of my classes were in the original building, which still stands in the middle of “campus.”  However, back then, a classroom was just a square or rectangular room with a blackboard and wooden-top desks, most likely fixed to the floor. I have been to both Hanover High School (opened in 2003) and Douglas S. Freeman High School (1954), and they are both modern, impressive secondary schools. Although Douglas S. Freeman may be showing a little bit of “age,” it still has, I believe, excellent facilities.

My soccer-playing grandkids (not the two that graduated) and even my children, for that matter, will be shocked to learn that I was “on” my high school soccer team (check my yearbook!) in the fall of my sophomore year.  The season was in the spring, but we practiced all fall to get ready for matches.  Our soccer field? We practiced in the cafeteria! If I recall, the tables and chairs were removed. But, I never made it to the spring season. No, I was NOT cut! I dropped off the team because I could not head the ball with a face mask on (I wore eyeglasses).

Claire and Jordan both participated in two sports each. When I went to their events, I was constantly in awe and amazed at the quality of the facilities available for their use.

A PLAN FOR COLLEGE

Everyone that I knew that graduated with me and went on to college was on a four year plan. Everyone. That’s 4.0 years! That’s just what you did.

Nowadays, there are many reasons to graduate in less than four years, or perhaps, even take longer. Graduation from college in less than four years, and the enormous saving of money associated with that, has been made doable by dual enrollment and credits earned via AP or IB coursework. Conversely, there may be financial issues that cause a student to drop out for a while or cut back to part-time. On the more positive side, there may be summer or semester internships or study abroad opportunities that could delay graduation. There are many good reasons to take a little longer to graduate from college, but that wasn’t the case in 1957.

Finances were never a problem for us. In the 1950s, there was no tuition at the “city colleges.” And, there were no room and board charges. Brooklyn College was a 100% commuter school. Our free education was excellent. I know that  most college graduates come out of school in debt, sometimes enormous debt.  And, then, there are years of paying back student loans! What a horrible thing to look forward to.

Recently, I looked through my year book, and just looking at pictures (not exactly scientific), I made a count. In my graduating class of over 950, there were fewer than 15 African-Americans. And, even fewer Asian-Americans and Hispanics. This was simply a function of the neighborhoods that Erasmus drew upon (a couple of miles away in each direction) at that time in history.  But, surely it was not representative of the “real world.”

When I attended the Douglas S. Freeman and Hanover graduations, I was astounded, amazed and delighted to see such diverse student bodies. Clearly, a better reflection of what “life” is like.

If we did not want to attend our “local” high school, we did have several choices of “specialty” high schools. But, other than the High School of Performing Arts (think of the movie “Fame”), they were heavy in the sciences and technology.

The high school choices that are available locally are impressive: the Governor’s School, centers for the arts, Humanities, Leadership, the health/medical sciences and many more choices. For those who know what they want, or at least think they know what they want, going to a specialty center is an excellent option. And, there is AP, IB and honors coursework. Basically, something for everyone. These students, now, are so much better prepared for college than I ever was. As I see it, this is truly the big change in secondary education over the past 60 years.

WHAT’S NEXT RIGHT AFTER GRADUATION

THE BEST THING I EVER SAW AT A HIGH SCHOOL GRADUATION

This is not really related to the theme of the essay, but it is so noteworthy that I thought I’d mention it. At one point during the Hanover High School graduation, the person at the lectern said, roughly, “would those students who are going to service academies or going into a career in the military, please stand.” Several students stood up. People started to clap. And, then, everyone in the Siegel Center stood and clapped. That’s when my daughter “lost it,” as she said later. My grandson Jordan, her son, who is going to VMI, was standing.

We didn’t smoke anything. Cigarettes, cigars, not anything. Now? Well, I think for some high schoolers, the times have changed.

Every generation has “their” music. Between 1953 and 1957, we had music! And, that was rock and roll!! “Blackboard Jungle” came out in 1955, and with it, Bill Haley and His Comets became pretty well known. We had Chuck Berry, Fats Domino, Jerry Lee Lewis and the King, Elvis Presley. We could slow dance to the music of the Platters. And, we could Cha Cha to Harry Belafonte’s “Day-O (The Banana Boat Song).”

I don’t know how to identify or categorize “today’s” music. I know I don’t like it, but that’s probably what the parents and grandparents said about rock and roll in the 1950s.

Build a county high school and you better include some huge parking lots. And, that’s not just for the faculty and staff. Yes, lots of students ride a school bus to school. But, many, many students get to drive their own or some extra family vehicle, as soon as they come of age.

I took city transportation – one bus ride (free) for about 20 minutes to get to my high school. There were no buses for public schools in New York City.

When I graduated from high school, I thought I was very well prepared for college. And, for that time, I was. So much has happened in the past 60 years, not the least of which has been the development of the computer. It appears to me that Claire and Jordan have had an excellent secondary school experience and are, probably, better prepared to progress to the next educational step in their lives. I look forward to their next graduation, which will, perhaps, coincide with the 60th anniversary of my college graduation.

Art Seidenberg is a retired VCU Associate Professor (biology). He canoes (flatwater), hikes (state high points, N = 40), travels (all 50 states) and remains active in the VCU Community (a “friend” of music and the university library). In his spare time, he attempts to keep up with his 12 grandchildren, all of whom play or have played sports.