Diving beneath the surface in this classic British town 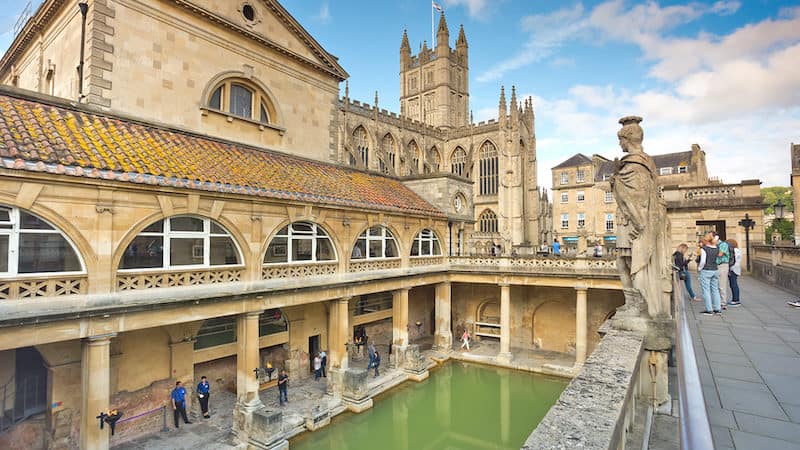 Travel writer Rick Steves explores the highlights of Bath, England: the history, elegant buildings, superficiality, and deep goodness of the historic spa town. The largest city in the county of Somerset, England, is known for its Roman-built baths and protected architecture.

As we’ve had to postpone our travels because of the pandemic, I believe a weekly dose of travel dreaming can be good medicine. Here’s one of my favorite memories from one of my favorite English cities – a reminder of the fun that awaits us at the other end of this crisis.

Paul runs the Star Inn, the most characteristic pub in the historic spa town of Bath (two hours west of London). He keeps a tin of complimentary snuff tobacco on a ledge for customers. I try some, enjoying the sensation of a monkey dancing in my nose. Paul says English coal miners have long used snuff because cigarettes were too dangerous in the mines, and they needed their tobacco fix. He wants me to take the tin as a gift. On my way out, while keeping one eye on a drunk guy from Wales squeezing by me holding two big pints of the local brew over my head, I put the tin back on the ledge and assure Paul that I’ll enjoy it the next time I stop by.

Walking home through the English mist, I think about how this very old town has become one of the most touristy places in Britain. Since ancient Roman times, when the town was called Aquae Sulis, its hot mineral water has attracted society’s elite.

A breakthrough came in 1687, when Queen Mary, fighting infertility, bathed here. Within 10 months she gave birth first to a son … and then to a new age of popularity for Bath. The town boomed as a spa resort. Local architect John Wood was inspired by the Italian architect Palladio to build a “new Rome.” The town bloomed in the Neoclassical style, and streets were lined not with scrawny sidewalks but with wide “parades,” where women in stylishly wide dresses could spread their fashionable tails. Bath became the Hollywood of Britain.

Today, the former trendsetter of Georgian England has more “government listed” or protected buildings per capita than any town in England. It’s a triumph of the Neoclassical style of the Georgian era, with buildings as elegant as the society they once housed.

‘All fur, but no knickers’

In the morning at my posh hotel, which fills one of a row of Georgian townhouses, I chat with the doorman, marveling at the uniform elegance of the buildings. He takes me aside and says, “The Georgians were all about façades. Both architecturally and as people … it was just façades.” He then walks me to the back garden, where the uniformity of the front gives way to a higgledy-piggledy mess. “The people back then were just the same,” he says, “All fur, but no knickers.”

The entire city, built of the creamy warm limestone called “Bath stone,” beams in its cover-girl complexion. With the theme of façades in mind as I stroll through town, I see classical columns that supported only Georgian egos and false windows built in the name of balance. Two centuries ago, rich women wore feathered hats atop three-foot hairdos and the very rich stretched their doors and ground floors to accommodate this high fashion.

To get behind another of those classy façades, I drop by the Georgian house at No. 1 Royal Crescent. It’s a museum that gives an intimate peek into the lavish lifestyles of the 18th century. I learn that high-class women shaved their eyebrows and carefully pasted on trimmed strips of furry mouse skin in their places. The kitchen, with all the latest Georgian gizmos, included a meat spit that was powered – I kid you not – by a dog on a treadmill.

Another highlight is a stroll through four centuries of clothing trends in the Fashion Museum. Following the evolution of style one decade at a time, from the first Elizabeth in the 16th century to the second Elizabeth today, comes with some fun trivia. I’ve always wondered what the line, “Stuck a feather in his cap and called it macaroni,” from “Yankee Doodle” means. I learn the answer here.

For a taste of pompous aristocracy, I pop into the Pump Room for tea and scones with live classical music. I sip the curative Bath water from the elegant fountain. It tastes awful.

If ever a city enjoyed looking in the mirror, Bath’s the one. But I’m left thinking that it’s not all narcissism. There’s a beauty in this town that goes deeper than its façades. And if you manage to sniff out those offbeat experiences, you may even enjoy that sensation of monkeys dancing in your nose.