The Wrath of Hurricane Camille

When it rains, it pours 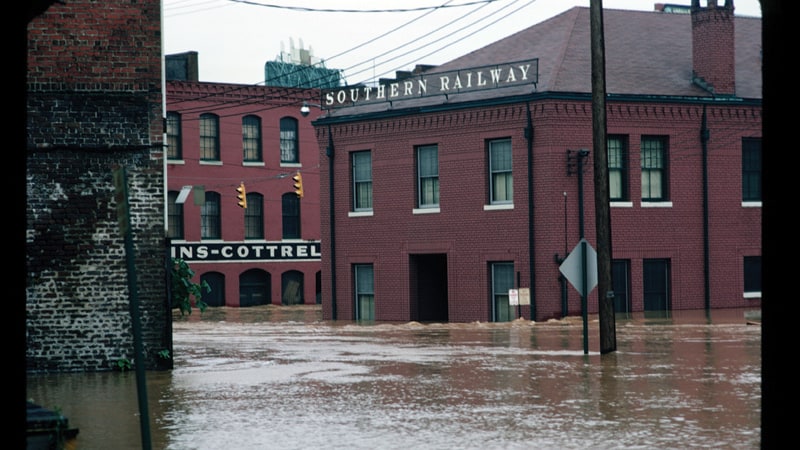 Richmonders were so overwhelmed by the “Great July Storm,” the worst rainstorm in years, that the city was declared a disaster area, giving residents access to relief loans from the Small Business Administration.

Little did we know that a greater disaster was soon to follow for the commonwealth. In August, Hurricane Camille formed in the Gulf of Mexico and moved up the Mississippi River. In moving north, Camille weakened to a tropical depression, dropping only one to two inches of rain on eastern Kentucky. On the evening of Aug. 19, however, the storm turned east over the Blue Ridge Mountains, and rains intensified dramatically.

“In an eight-hour period, rainfall of 12-14 inches was fairly widespread in the mountains, and amounts exceeding 27 inches occurred in one area,” said a report by the Environmental Science Services Administration of the U.S. Department of Commerce. The prodigious rains came without warning; flash floods and landslides hit overnight, taking down houses, catching many families at home unaware, destroying telephone lines and hampering communications. Horrendous stories later trickled from that “one area,” Nelson County, of families separated, of homes and lives swept away by water and mudslides.

As the floods moved down the tributaries and into the James River, Richmond had advance warning, but the floodwaters crested – at nearly 30 feet, according to some reports.

Overall, Virginia experienced 114 storm-related deaths and 37 persons missing and presumed dead, with more than 100 bridges swept away by the waters.

“With a single exception, no community flash-flood preparedness programs existed in the headwaters of the James River Basin,” said the report. At the time, wireless emergency alerts were merely science fiction.

Today, the 16,323-foot Richmond Floodwall helps to protect 750 acres of land on both sides of the James River along the fall line, Shockoe Valley on the north and Manchester on the south.