Her post-retirement advice is simple, but it sure works 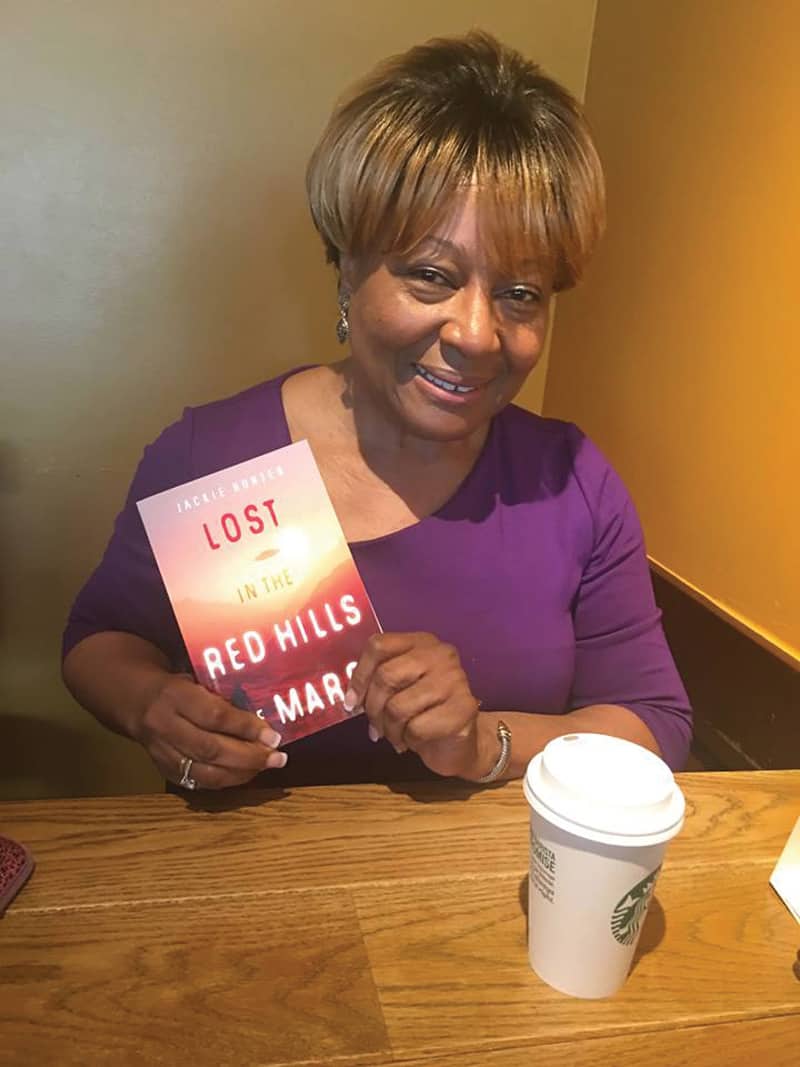 Jackie Hunter showed up at the coffee shop with two books. One was her own. The other was, well, OK, perhaps a slightly better-known Mars book, Ray Bradbury’s The Martian Chronicles. Kirkus Reviews had likened a Bradbury plotting device to one of her own. So Hunter thought she should read the science fiction classic.

But of course. What’s one more item on her massive to-do list.

As you know, “Second Acts” features inspiring people who didn’t clock out once they gave up the 9-to-5 gig. Many baby boomers – first careers behind them, productive years ahead – seek a rewarding change of pace. But for Jackie Hunter, who is now 67, this is more like a 22nd Act. The woman operates at hyper speed – fittingly enough for someone who has just written a sci-fi book for teens, Lost in the Red Hills of Mars: Entertaining, Thrilling, Enthralling Mars Survival Adventure

We met the other day at a Starbucks near Parham and Staples Mill roads. Hunter remembers writing poetry and short stories as a 12-year-old. There was nothing to suggest she would write a book, though.

Hunter had started teaching middle school math and science in 1973, retiring in 2004. (Five years as an assistant principal at Lakeside Elementary School were in the middle.)

“Retirement” meant anything but retirement.

Hunter became a Realtor for 2004-05 and maintains her license. In 2005, she and a friend took it a step further, starting a company to renovate repossessed homes. In 2011, after the friend’s death, Hunter shut it down.

That left her free to move to Georgia to help her daughter and son-in-law, basketball star Jerry Stackhouse. They had taken in five teenage boys from low-performing schools to give them a better chance at college. “I’m a very flexible personality, very adaptable,” she says. She helped for three years, then moved back to Richmond …

But to do what?

She focused on “what made me very happy as a child. I loved art – oil and acrylic painting.” She took classes at the Glen Allen Cultural Arts Center and the Virginia Museum of Fine Arts.

And she began writing stories. Through Meetup.com, she learned of an “Agile Writers” group, headed by Greg Smith. “I had to be very, very disciplined with everything,” she says. “Agile Writers met weekly; you were expected to have 10 pages written.” Meanwhile, she read up on everything from character development to printing.

What would she write? She remembered taking middle school students to the regional math-science center. “My students were so excited when they could make a colony on Mars,” she says. “They had bubbles, big pieces of plastic” – and unlimited imagination.

What has emerged is a Young Adult novel featuring a 13-year-old Mars-born girl, Celine. The book, which Hunter published through Amazon, is perfectly timed to catch the wave of interest in STEM – science, technology, engineering and mathematics education – and especially of girls in STEM.

Except that wasn’t it at all.

Hunter had never even heard the term “STEM” until she wrote the book.

And the book was first written about a boy! “But I was having trouble with a boy’s voice,” she says. The boy became a girl.

Indeed. Hunter is at work on Lost in the Deep Blue Sea, and, after that, she will start on Lost on the Dark Side of the Moon.

Even that’s not all. She’s wrapping up a five-part interview series for a Comcast cable access channel. The weekly videos, recorded for July and early August, feature people in science. Hunter is always seeking to inspire.

“When you want to know what direction to go in,” she tells fellow boomers, “recall the things that gave you joy, and dreams – before you took on adult responsibilities.”

Then? “When I want to learn something new, I start with the people I know; I read books, take classes and join clubs. It’s just that simple.”

Ray McAllister, former Richmond Times-Dispatch columnist and former Boomer editor, is the writer of six books, including four award winners on the North Carolina coast, and the publisher of others, including the just-released Ocracoke Lighthouse and The Old Salts by Ellen Fulcher Cloud. RayMcAllister.com