Overcoming Obstacles by Muscling Through Them

Lou Ferrigno on the 40th anniversary of The Incredible Hulk 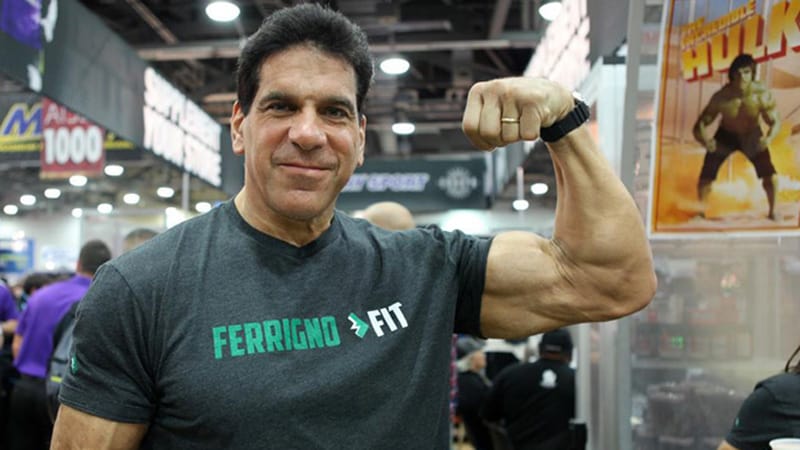 If you’re ever pulled over by a certain 6’5”, 240-pound sheriff’s deputy from both the Los Angeles County Sheriff’s Department and the San Luis Obispo County Sheriff’s Office in California, you’ll want to make certain you don’t make him angry.

“My father was a police lieutenant in New York City,” he explains, “and this is my way of giving back. I went to the police academy, I got certified, I’m very proud to be doing this work,” he adds. “People are pretty respectful of it, too.”

It’s hard not to respect what Ferrigno, 66, has accomplished in his life. At 21, he was a bodybuilding champion who had won the coveted International Federation of Bodybuilding and Fitness (IFBB) title of Mr. Universe. He became the youngest person to win the title two consecutive years, 1972 and 1973, a record that stands to this day. In 1977, when Ferrigno was 26, he appeared in Pumping Iron, the acclaimed documentary that saw him go up against Arnold Schwarzenegger for the IFBB’s Mr. Olympia title. The movie caught the attention of Hollywood producer Kenneth Johnson, who was casting a certain television show that premiered 40 years ago this November.

For anyone who doesn’t know, The Incredible Hulk’s premise centered on a physician and scientist named Dr. Bruce Banner (played by Bill Bixby) trying to tap into the hidden strengths that all humans have. An accidental dose of gamma radiation turned him into a very large, super-muscular green creature whenever he got angry or upset.

While it was based on the Marvel comic strip of the same name, Johnson added elements of Les Miserables to the storyline by having an investigative reporter pursue the creature, who was wanted for a murder he didn’t commit.

Ferrigno was thrust into the national spotlight after he was offered the part. He says the show was a sensation “because everyone has those demons inside us – we all get angry and frustrated.”

The show’s popularity continues to this day, thanks to episodes being broadcast on the El Rey Television Network.

“So many of us who work at El Rey are fans of The Incredible Hulk,” says Dan Koslowski, director of programming and acquisitions for the network. “The feedback from our audience has been fantastic, and I am so glad that the Hulk has found a home on El Rey.”

Audiences couldn’t help but feel sad for Dr. Banner. The “hulk outs,” as the transformations were called, helped lure viewers to the small screen; but it was Ferrigno’s sensitive performance as the creature that often gave the show its humanity.

Since the creature wasn’t given any lines of dialogue, Ferrigno says he had to convey emotion “by acting without speaking. It was a good training process for me.” It was one in which he could draw upon personal experience for guidance. Ferrigno, who suffered a series of ear infections soon after he was born, lost 75 percent of his hearing and had to learn how to lip read as a result.

Bullied while growing up, Ferrigno eventually turned to weightlifting and bodybuilding to bolster his self-esteem.

Though he retired from competitive bodybuilding in 1994, Ferrigno has worked as a personal trainer and fitness consultant for years. Fueled by a desire to help people become the best they can be, Ferrigno is also a much-sought-after motivational speaker.

“I want to help people turn their disabilities around,” he says. “Maybe I can give them some hope.”

Married for 37 years to Carla, a psychotherapist who later became his manager, Ferrigno and his wife have three children – a daughter, Shanna, and sons, Louis, Jr. and Brent.

With Shanna, whose recently published book, The Reset Plan, aims to give individuals the tools to take control of their own lives, Ferrigno now runs a company called, appropriately enough, Ferrigno Fit. Offering personalized programs designed to help people improve their lives through better health, the Ferrignos want to help individuals achieve their fitness goals. For instance, a visitor to their website at FerrignoFit.com can find blog posts about weight loss tips, nutrition information and exercise training books, among others.

To his many fans, Ferrigno is an inspirational role model who maintains that perseverance is the key to fulfilling your dreams.  He is, after all, living proof that you can overcome any obstacles that are in your path.

“Embrace your passions and don’t let anything stop you from realizing your goals,” he says. “Just keep going. And most importantly, love thyself.”

DOUGLAS J. GLADSTONE is the author of two books and multiple newspaper, magazine and webzine articles. His profile of Friends actress Maggie Wheeler appeared in the August-September 2017 issue of BOOMER.