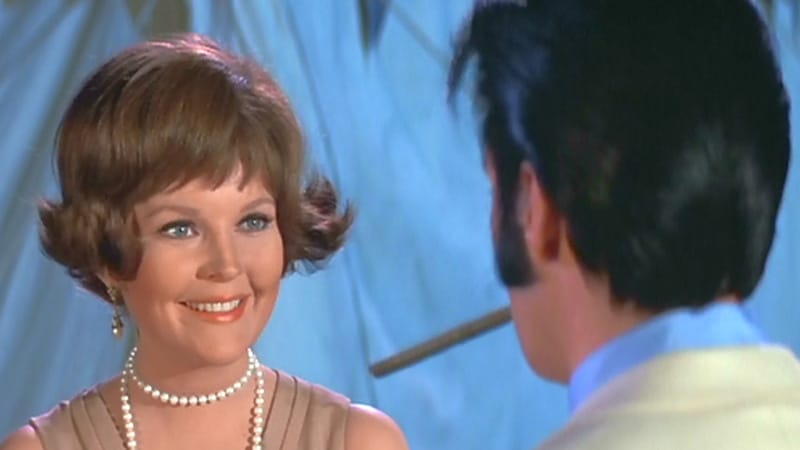 Beginning in 1960 and for some three decades thereafter, Marlyn Mason appeared in almost one hundred television series, earning the unofficial title of TV “Guest Star Queen.” While her film roles were far fewer, fans of Elvis Presley movies remember the actress as Elvis’s vivacious co-star in his next-to-last film, 1969’s “The Trouble with Girls.” However, Marlyn left Hollywood – literally – in the early 1990s.

“When my Hollywood career came to a halt I moved to Oregon,” said Mason from her home in Medford. But she didn’t retire from acting completely. Taking advantage of the lush, natural settings and charming towns for location shooting as well as regional talent, Mason has written, starred in, or produced several dramatic Oregon-based short films over the past decade.

“I wrote a screenplay about a lonely woman who’s an aging, nude artist’s model (‘Model Rules,’ 2008),” she said. “The only way she can get attention and fulfill her fantasies is to pose nude for artists. It’s kind of a sad piece but there is humor in it.”

A local filmmaker, Ray Robison, directed the film which won best actress or best screenplay awards for Mason at several film festivals around the country. In 2010, the duo teamed up again for “The Bag,” a very personal account of Mason’s mother’s decision to end her life and which featured Hollywood veteran actors Richard Erdman and Peggy Stewart playing Mason’s parents.

“It’s a rather grim topic, but the actors bring a natural humor to the piece,” said Mason. “I wanted to make a non-political, non-religious comment on the mere fact that some elderly people simply want to go to sleep and not wake up. My mom was one of those people. She was 92 and deserved the right to die the way she wanted.”

In 2013, Mason headed back to California briefly to film her romantic drama “The Right Regrets,” directed by veteran TV director Ralph Senensky. “He was turning 90 and came out of a 26-year retirement to direct this love story I did with Maxwell Caulfield. It’s beautifully photographed and looks like a mini-feature. Ralph has the special touch that translates magnificently onto the screen.”

Last summer, Mason also returned to feature films with the release of the thriller “Besetment” (see BarbedWireFilms.com). “It’s very creepy, and I’m very creepy in it!” she said, laughing. “The director, Brad Douglas, wrote the role for me and I had a wonderful, fun 20 days filming.”

While her early Hollywood days remain fond but distant memories now, they are ones she is often asked to share at film conventions, especially in connection with Elvis. “I just got invited to Quebec for the annual Elvis show in October.”

Mason was one of the numerous actresses (‘Elvis Girls’) to appear in Presley’s 31 feature films, but was not a fan of Elvis or his music when they began filming “The Trouble with Girls.” In fact, she was prepared for Elvis to flaunt his superstar status but “he turned out to be the best guy in the world to work with.”

When not looking back and sharing Hollywood memories, Marlyn continues to look forward to more filmmaking. “It’s not about the length of the film or even the role. I just love to keep working!”

Her current ‘bucket list’ also contains three additional life goals. “I want to be feeling good – not sick – when I die and I want to be the next Betty White, still working at 95.”

Finally, she adds jokingly, “and I want to be the sole surviving Elvis leading lady – there are about 18 of them left who I have to kill off! But seriously, I’ll be 78 this year, I’ve had a good life, and have nothing to cry about.”