Musical healing for Alzheimer’s patients and their families 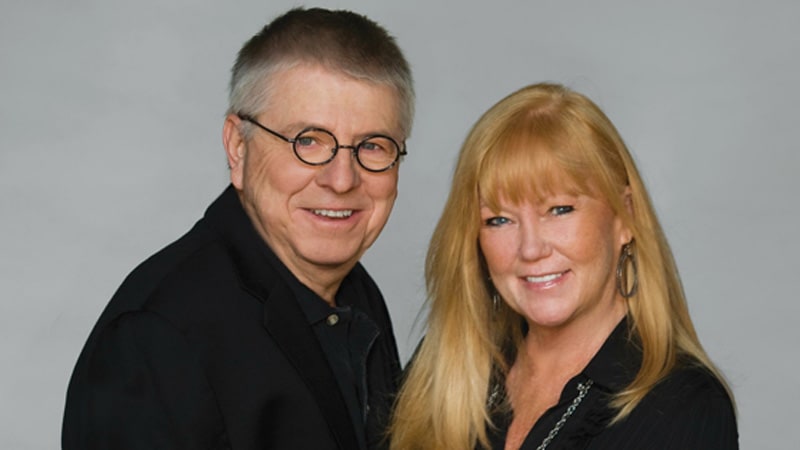 After Carol Myers’ sister was diagnosed with early-onset Alzheimer’s, Carol and her husband, Bud, used his musical experience to elevate the lives of Alzheimer’s patients and families. Their project is one that others can participate in, too.

Bill Bevins: We’re very, very honored to have some very good friends in the studio with us. Bud Myers and his wife, Carol Myers. Thank you both for coming in.

BB: We’re going to talk about family, about Alzheimer’s and caregivers. None of us would ever choose this route, but we find ourselves in that position, and it is a tough road to go. But with enough love and patience, it can work. We have a fact here: in 2016, 15.9 million families and friends were caregivers to Alzheimer’s patients. Carol, your story’s very personal – you have taken on pretty much a full-time job of taking care of your sister, Darlene – your sweet, beautiful sister, who I’ve known for years. She’s really been through a lot already, hasn’t she?

CM: She has. No one saw this coming. It’s been a little over seven years. She was extremely successful, had her own business, very well known, extremely intelligent. We were blindsided by the diagnosis that she has early onset Alzheimer’s.

BB: This is not an elderly person at all. She was pretty much in the prime of life.

CM: She was 53 when we confirmed the diagnosis.

BB: She was business owner, mom and athletic. You couldn’t even imagine what would be waiting down the road for her. Did you have any idea what you were in for?

CM: None. Everyone that I had come in contact with was in their 70s or 80s, and it was a slow loss of memory. From what we researched and found out from Johns Hopkins later, it progresses faster when someone is young. So in her seventh year, she’s where a lot of older people would be 15 to 20 years later.

BB: Physically, how is she?

CM: Physically, I think she’s blessed because she can still walk. She still laughs and smiles. Mentally, she is pretty much beginning her final stage of Alzheimer’s. She needs assistance with just about everything day to day.

BB: Your husband, Bud Myers, is a music guy, and you got music involved with this.

Shelly Perkins: You’re so active, it wasn’t enough just to make sure that Darlene got into a good facility for her health-care needs. You decided to take on a great project: a concert series. We know that music and memories are tied so together. So tell us about this music series and why you wanted to put this together.

Bud Myers: We’d been using music really just to cope. We loaded up our iPod with the music of the 60s, and when we were keeping Darlene 24/7, the music provided us with a break. When we had that music on, you could see her spirits lift. She smiled. She’d even move and dance. It’s well-documented how music has done that, has taken some very severe patients and they come to life because of the music.

Carol came up with the idea a couple years ago of bringing in musicians and doing concerts. I knew it would not only benefit the people with Alzheimer’s, but also the caregivers. Three-quarters of caregivers are women, and two-thirds of them are 65 and over. They should be at a stage of life where they’re not having issues, but they’re having to strap this problem on. Another 20 percent are women who are sandwiched in-between: having to care for the Alzheimer’s patient and then having an 18-year-old at home. Caregivers for Alzheimer’s/dementia patients are twice as likely to become seriously ill than caregivers for older patients without Alzheimer’s.

What I think the concert series has done is give another point where families can come together. They can come into the facility and they can sort of play on each other’s energies. They can understand that everybody is in this together. A wise woman once said it takes a village; I think that’s pretty much the way that it is.

SP: What’s really been great about this series is that it’s not limited. This has actually been open and free to the public, which is a great service for everyone.

CM: Yes, we found when we started this – this is Darlene’s third center– that it created so much positive energy that the facilities decided to start advertising, to invite people in.

BB: You guys were lucky enough to have some pretty high-end entertainment. I was there for a couple of concerts.

BM: Susan Greenbaum has been really helpful. She’s adapted her style to these performances. Being a sing-along, it helps to get the families together. So it’s been wonderful. We had Suzie “MoJo” Johnson, who has been doing country music around the state for quite awhile. She’s great. Steve Bassett performs August 2nd at the Memory Center. All are invited.

CM: Kelly Moss, who sings with MoDeBree, she’s going to be our next entertainer. They go on the first Wednesday of every month through August.

BM: And what’s great about it is they all want to do this. They want to share their time, and they understand the benefit. I think they get a great deal out of it as well. Because when you do see it, when you see the live performance with the patients, they really are reacting. It really does make a difference.

BB: Susan Greenbaum, as you said, adapted her act, doing 40s songs and early 50s songs. And people were singing along, even some of the elderly patients. When you look down the road, do you want to continue?

BM: I appreciate you giving us this opportunity, because I think this is a call to action for anyone who could help in this situation. What we found is that these facilities, on a day-to-day basis, are strapped with just doing the daily operations. This is a huge volunteer opportunity for more people to get involved and provide their services. So, yeah, we’d love to be able to do it ongoing, but we need a lot more energy and a lot more help.

CM: We would like to help other facilities. Anyone that’s looking at adding a musical venue, we would be more than willing to help them get started.

BM: It really does come from a grass-roots movement.

BB: If you’ve got a church group, synagogue, Boy Scouts or Girl Scouts and you’d like to make a difference, a big difference, volunteering a couple hours can make that difference. Once people see these families and what they’re coping with, you’ll get a lot more volunteers and it’ll spread. That’s what we’re here for today.

I want to thank you both for sharing your story, and we wish you the best of luck as you continue down this path. We appreciate all the love you’ve shown to so many people.

To learn more about presenting sing-alongs to Alzheimer’s patients, reach out to BudMyersCom@aol.com.

Bill Bevins and Shelly Perkins, teamed as a Richmond radio fixture since 2001, are morning hosts with Star 100.9.