Home » From Our Readers » My Mother’s Traditional Coconut Cake 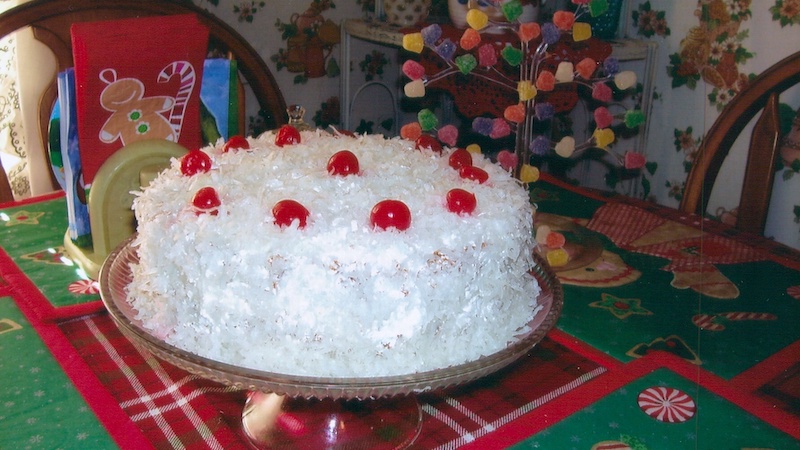 Writer Julia Nunnally Duncan reminisces about her mother’s traditional coconut cake, with its rich seven-minute frosting and sweet flaked coconut. Always a family dessert at Christmastime in Julia’s 1960s childhood, the tradition continued across the decades … and possibly into the future.

Throughout my 1960s childhood in Marion, North Carolina, my mother provided a lavish Christmas dinner: turkey, dressing, giblet gravy, mashed potatoes, green beans, corn, cranberry sauce, biscuits, and a pitcher of sweet tea. But my favorite part of the holiday feast was her coconut cake.

My mother always made a coconut cake for Christmas. Coated with rich white frosting and sweet coconut flakes and adorned by juicy red maraschino cherries, the cake was a hearty Christmas dessert for our family, with plenty left over for snacking. On late-December evenings while I sat in our front room watching Leave It to Beaver, I forked chunks from a thick wedge, not letting a moist crumb of this cake go to waste.

Through the years, my mother continued to cook Christmas dinner for the family. But in time, fewer of us sat at her dinner table, and she eventually ordered a prepared meal from the supermarket deli. After my father’s death, she came to my house for Christmas dinner with my husband, daughter, and me.

But I missed her dinners – a lost holiday tradition. One December shortly before Christmas, I asked her, “Why don’t we make a coconut cake this year?”

“You’ll have to find my recipe for seven-minute frosting,” she said, and I headed for her recipe holder. “You’ll need to get the yellow cake mix that calls for butter,” she added.

“I will,” I said. And with recipe in hand, I went to the store to gather supplies.

Later, the batter mixed and cake pans in the oven, my mother and I settled in the front room. She believed in staying out of the kitchen while a cake baked. When I began to smell the cake’s aroma, I said, “I think I’ll go check on it.”

“Not yet,” she said. “If you open the oven door now, it might cause the cake to fall.” So we waited until the layers properly baked and cooled and then eased them onto the cake plate.

She prepared the frosting, standing over the bubbling double boiler with her mixer in hand, beating the egg whites, sugar, vanilla extract, and water for seven minutes until the frosting stiffened in snowy peaks.

At her dining room table, butter knives in hand, we spread the frosting between the layers and over the cake and sprinkled coconut on the top and sides. With a damp dishcloth my mother wiped away excess frosting and coconut from the cake plate’s rim.

“I forgot how messy this coconut was,” she said, noticing flakes on the tablecloth.

In a finishing touch, we stuck red maraschino cherries in a circle around the top and one in the center.

“One year I used green cherries,” she said.

We scrutinized the finished cake, turning the pedestal around to get a good look, and were satisfied. Later that day, I took pictures of the cake, a practice that became part of our new holiday tradition.

As seasons passed, I took on more responsibility for the cake preparation, tackling the seven-minute frosting myself, while my mother supervised. “Make sure it peaks,” she advised.

One rainy December day, I asked, “Do you want to make a coconut cake this year?”  She hadn’t mentioned making one yet, and Christmas was around the corner.

“If we can have a clear day,” she said. “You can’t bake a cake in damp weather.”

“I know,” I said, remembering years earlier when her cake layers sunk. Though she decorated the defective cake, she ended up tossing it out the back door.

“I would have eaten it,” I said, disappointed. “It would taste good.”

“I ain’t keeping a cake like that,” she said. And on the first clear day afterwards she made a second cake that rose perfectly.

A couple of years ago – a few days after Christmas – she said, “You know, we didn’t make a coconut cake this year.”

“No, we didn’t,” I said, feeling guilty I hadn’t initiated it.

That was our last Christmas together. Since then, another Christmas has passed, and the next will be here soon. As the holiday season gets closer, I find myself reminiscing about my mother’s coconut cake that became our coconut cake, and I don’t know if I will ever have the heart to make another one.

But I have her recipe for seven-minute frosting, and someday I may make a coconut cake again—perhaps with my daughter. I think my mother would want us to carry on this Christmas tradition.

Julia Nunnally Duncan, an award-winning writer, is author of 10 books of prose and poetry. Her personal essays have appeared recently in Smoky Mountain Living, Blue Ridge Country, Self-Reliance and Boomer and are forthcoming in Good Old Days, History Magazine, and World War One Illustrated. She often writes about her 1960s upbringing in a Southern textile town. A resident of Marion, North Carolina, she enjoys spending time with her husband Steve, a woodcarver, and their daughter, Annie.

A Horse of My Own, by Julia Nunnally Duncan