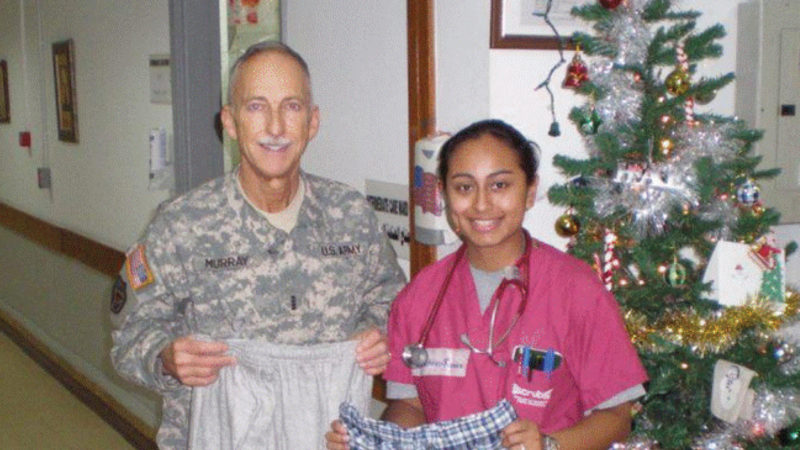 During World War I, my father served in France. Many of my relatives and immediate family served in various branches of the U.S. Armed Forces during those disturbing times of World War II, Korea, Vietnam and Iraq. 1953 to 1955, I spent 18 months in Augsburg, Germany, in the army. As a member of the American Legion and the Veterans of Foreign Wars in my latter years, I became a staunch supporter of the U.S. Armed Forces.

During the spring of 2007, the National Guard unit of my 59-year-old nephew, Chief Warrant Officer 4 Herman G. Murray Jr., deployed and was stationed in the International Zone, Baghdad, Iraq. An email and picture from Herman in November 2007 aroused my interest. Herman was delivering PJs donated by some of the employees of the City of Manassas, Virginia, to the hospital staff in the U.S. Army 86th Combat Support Hospital in Baghdad. During one of his visits to the Army hospital, Herman had learned from the nursing staff that hospitalized U.S. service members needed pajamas. When wounded military personnel were brought into the hospital, most of their clothing was cut off and destroyed. Consequently, after emergency care they were sent on to other hospitals, with only the normal open back garment provided in the hospital.

For many of us as veterans, the motto is “Old soldiers never die; they just volunteer their life away.” The American Legion National Commander, Marty Canister, in 2007 said, “If we put soldiers in boots, and we put those boots in harm’s way, it’s our responsibility as a Legion family to support them in every way.”

What better way could I find to help those wounded soldiers than to send PJs to Herman for the wounded soldiers in the hospital? I emailed Herman on Nov. 15, 2007 requesting specifics such as sizes and material.

During the November monthly meetings of the American Legion Powhatan Post 201 and the VFW Powhatan Post 10570, I informed my fellow veterans I was initiating Operation PJs for the wounded soldiers in Iraq. One of the legionnaires kicked it off with a sizable donation.

This was enough to get the ball rolling. I had to get the word out to people, organizations and businesses in Powhatan and surrounding areas to participate with PJs and/or monetary donations. I could then purchase, pack and ship the PJs to Herman. Via word of mouth, “let’s support our wounded troops” rolled through Powhatan. PJs and monetary donations were delivered to my door. By December 12, 2007, I had shipped five boxes containing 134 PJ items (bottoms, tops and tees) with a cost, including shipping, of $1,349.47.

Lt. Cmdr. Michael Tinsley emailed, “The pajamas will be the only clothing many of the hospitalized members have to wear after their uniforms are cut off and they leave surgery. Although the hospital issues hospital gowns, it is really the pajamas that help restore a person’s dignity and self-respect. Dignity and self-respect go a long way when there’s seemingly not too much more to be thankful for. They also give them moral support knowing that the home folks are providing the PJs for them.”

Peter Bacque wrote an article about the Midlothian support for soft blankets in the hospital at Balad Air Base that was published in the January 19, 2008 Richmond Times-Dispatch. I emailed Peter asking if he would consider writing an article concerning the need for PJs in the hospitals in Iraq and the support that the people in Powhatan were giving to our troops. On January 25, 2008, he wrote “Warming up wounded troops.” Within a week, there were a number of inquiries about supporting our PJs Project.

After the news got around the Powhatan, Goochland, Cumberland, Amelia and the surrounding area, there were many emails and telephone calls. Community and civic clubs, youth groups, volunteer groups from business firms and church organizations expressed interest in participating.

During my quest for pajamas, I visited many exotic places, including Old Navy, Kohl’s, JCPenney, Walmart, Sears, Target, K-Mart and K&G Fashion Superstore. I must say, I became quite the shopper of the “bedtime” apparel and its many bottoms, tops and tees.

In January 2008, Pat Matijevic, chairperson of the volunteer council at Owens & Minor in Mechanicsville, contacted me about donating the money that the council received from “Wear Jeans Friday” to the PJs project.

In February 2008, a 74-years “young” lady in Richmond, asked me to pick up some PJs she had purchased during the past month. I brought home 12 bags – 132 PJ bottoms and six tees. She also had written about 20 cards to the soldiers and gotten her grandchildren to write letters. She wanted to put a letter in the pocket of each PJ. During the Operation PJs period, she gave me over 184 PJ items.

On March 27, 2008, a truck stopped in front of my house in Powhatan Courthouse to deliver the donations from Owens & Minor. The driver proceeded to forklift three large skids of boxes into my garage. From my inventory, the boxes contained 1,725 scrub bottoms and tops, 208 PJs bottoms and tops for a total of 1,933 items. In my wildest dreams, I would never have thought that the PJs project would get more than 200 to 300 PJs.

“How am I going to ship all these PJ items?” I wondered.

[I read about] the Landstuhl Hospital Care Project (LHCP) in Stafford, Virginia, whose mission is to help support the pastoral services department at Landstuhl Regional Medical Center in Germany and field hospitals in combat areas, to provide comfort and relief items for military members who become sick, injured or wounded from service in Iraq, Kuwait, and Afghanistan. [After receiving assurance that Landstuhl Hospital was a reputable organization] and very supportive of the wounded soldiers, sailors, airmen, and Marines, I was confident that LHCP would appropriately distribute the donations that had been made to our Operation PJs for the Wounded Soldiers Project. On April 10, 2008, Karen with two of the Stafford area American legionnaries drove down from Stafford to pick up our donations.

As the trailer with the last PJ items pulled away from our garage and rounded the corner, I sat there in awe, overwhelmed with emotion. From an idea, we the people in Powhatan, the surrounding counties and the Richmond area had demonstrated our support for our wounded veterans who gave so much to keep the U.S.A. a safe place.

As I write this, LHCP is continuing its support for our wounded troops. Check out Landstuhl Hospital Care Project here. You will be amazed! Be warned. You may get a “leaking tear duct” as you scan through the comments.

We thank all those who gave from their hearts and their pockets, showing their support for our men and women who give so much each day for our country and freedom. God bless you all!