Home » Travel » Perspectives on Pot in the Netherlands

Perspectives on Pot in the Netherlands

A coffeeshop conversation in Amsterdam 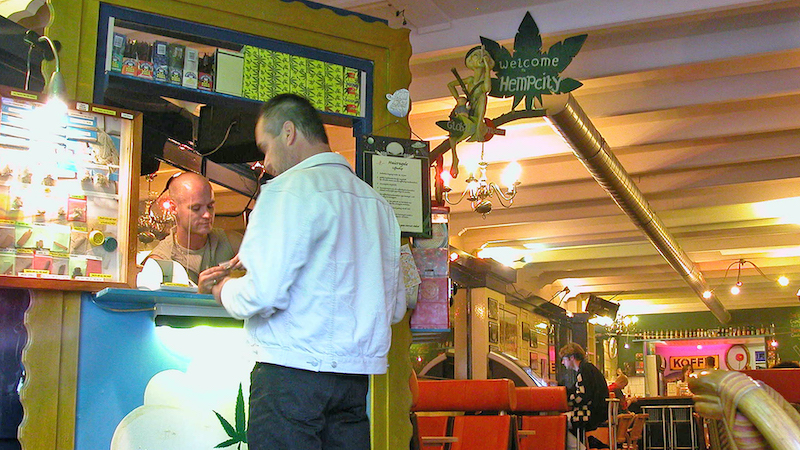 Travel writer Rick Steves visits an Amsterdam coffee shop and learns about the perspectives on pot in the Netherlands, a mind-opening distinction from America.

As we’ve had to postpone our travels because of the pandemic, I believe a weekly dose of travel dreaming can be good medicine. Here’s one of my favorite European memories from the Netherlands – a reminder of the rich experiences that await us at the other end of this crisis.

Wandering around Amsterdam, every few blocks you pass a window full of plants displaying a red, yellow, and green Rastafarian flag – both indications that the coffeeshop doesn’t sell much coffee. These days, “coffeeshop” refers to a place where the Dutch gather to buy and smoke marijuana. I duck into one of these coffeeshops to get the latest.

A round table at the front window is filled with a United Nations of tourists sharing travelers’ tales stirred by swizzle sticks of smoke. From the looks of the ashtray, they’ve been here a while. The table is a clutter of teacups, maps, and guidebooks.

Taking a seat at the bar next to a leathery 40-something biker and a college-age kid with two holes in his body for each one in mine, I feel more like a tourist than I have all day. The bartender, Pieter – sporting a shaved head and a one-inch goatee – greets me in English and passes me the menu.

Swarte Marok, Blond Marok, White Widow, Northern Light, Stonehedge, Grasstasy … so many choices on the menu, and that’s just the wiet (marijuana). Hashish selections fill the bottom half of the menu. I point to a clipped-on scrap of paper. “What’s Aanbieding: Swarte Marok?”

Above me dangles a tiny Starship Enterprise from a garland of spiky leaves. And behind Pieter stands a row of much-used and apparently never-cleaned bongs, reminding me of the hubbly-bubblies that litter Egyptian teahouses. With a flick of my finger, I set the Enterprise rocking.

When I marvel at how open-minded the Dutch are, Pieter explains, “We’re not open-minded, just tolerant. There’s a difference. Wiet is not legal … only tolerated.”

I ask, “Does this tolerance cause a problem?”

Handing a two-foot-tall bong and a baggie of leaves to a woman whose huge dog is tied to the bike rack outside, Pieter says, “My grandmother has an old pipe rack. It has a sign: ‘A satisfied smoker creates no problems.’”

“That was tobacco, wasn’t it?”

Firsthand perspectives on pot in the Netherlands

I ask the guy with all the holes why he smokes here.

Speaking through the silver stud in his tongue, he says, “Some young people hang out at coffeeshops because their parents don’t want them smoking at home, others come here to smoke pot with their parents. I come here for the coffeeshop ambience.”

The older guy in leather laughs. “Yeah, ambience with a shaved head,” he says, as Pieter hands him his baggie to go.

I ask about the sign with a delivery boy on it.

“In Holland, we have pot delivery services,” Pieter explains, “like you have pizza delivery in America. Older people take out or have it delivered.”

A middle-aged woman hurries in and says, “Yellow Cab, please.”

Pieter hands her a baggie saying, “I cut you a fat bag.”

With a “Dank u wel, Pieter,” she tosses it into her shopping tote and hurries out.

“We have lots of states where recreational pot is legal but a coffeeshop like this is not possible yet in the United States,” I say.

“I know,” Pieter agrees. He shows me snapshots of Woody Harrelson and Willie Nelson, each hanging out in this obscure little coffeeshop, and continues. “America’s two most famous pot smokers told me all about America.”

The kid chimes in. “Hollanders – even those who don’t smoke – they believe soft drugs … you know, pot, hash … it shouldn’t be a crime.”

“What do your parents think?” I ask.

“They think the youth have a problem. My dad says, ‘Holland will get the bill later on.’”

“And other countries … doesn’t legal pot in Holland cause them a problem?” I ask.

“Actually, it’s not legal here,” he reminds me, “just tolerated. Officially, we can’t legalize anything because your country made these world treaties.”

“The French complain about Holland’s popularity with drug users, but they have a worse problem with illegal hard drugs,” Pieter adds. “Here, the police know exactly what’s going on and where.”

“In many states, American prisons are filled with pot offenders,” I tell him.

“Take your choice,” he says. “Allow for alternative ways of living or build more prisons. Here in Holland, pot is like cigarettes. We smoke it. We pay taxes. We don’t go to jail.”

Photo caption, above: Arcos, Spain, where locals “see the backs of the birds as they fly.” CREDIT: Dominic Arizona Bonuccelli, Rick Steves’ Europe.