Taking in the sights from the seat of a bike 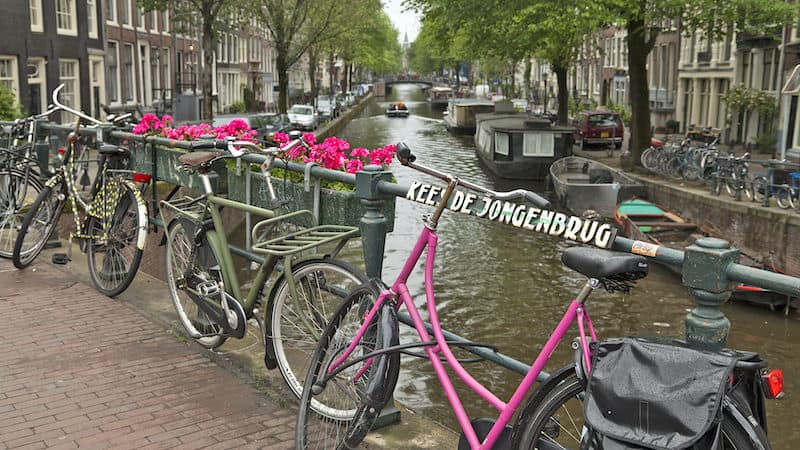 Travel writer Rick Steves takes the reader sightseeing and biking through Amsterdam, offering a multi-sensory experience of this vibrant historic city: the canals, the Red Light District, art museums, a classic meal … and the urinals.

As we’ve had to postpone our travels because of the pandemic, I believe a weekly dose of travel dreaming can be good medicine. Here’s one of my favorite European memories from the seat of a bike in Amsterdam – a reminder of the fun that awaits us at the other end of this crisis.

Sightseeing is more than just seeing. To get the full experience of a place, you need to feel, hear, taste, and smell it. On this visit to Amsterdam, I’m making a point to focus on sensual travel. It’s a city made to engage all the senses.

I always rent a bike here. I want to feel the bricks and pavement beneath two wheels. The lack of hills and the first-class bike lane infrastructure makes biking here a breeze. The clerk at the rental shop must be tired of explaining why they don’t carry mountain bikes in this flat land. When I ask, he responds – in classic Dutch directness – “Mountain bikes in the Netherlands make no sense at all. When a dog takes a dump, we have a new mountain. You pedal around it … not over. It’s no problem.”

I ride off along the shiny wet cobbles, my Amsterdam experience framed by my black bike’s handlebars. I get pinged by passing bikes and ping my bell to pass others. When it comes to bike bells, there’s no language barrier. For my own safety, I wish I had a bigger periphery, as cars, trams, bikers, and pedestrians seem to float by from all directions in silence – their noise lost in the white noise of breezing through this dreamy city on two wheels.

Sightseeing and biking through Amsterdam – the highlights

Reaching the Red Light District, I stop to use a classic old street-corner urinal. It’s painted a deep green and designed to give the user plenty of privacy from the neck down and a slice of Amsterdam view at the same time. The pungent smells of pot smoke and someone else’s urine compete with the dank smell of the canal. I remember one of the new Amsterdam facts I’ve learned: A handful of people drown in the canals each year. When their bodies are finally dredged up, very often, their zippers are down. They were very drunk and, rather than using the civilized urinal as I did, they used the canal … their final mistake. Across the lane, an abundant woman in a cliche of lingerie eyes me seductively from a window, framed in red. I think to myself, “This is probably the most unforgettable trip to a urinal I’ll ever have in my life.”

Continuing on my ride, it strikes me that much of Amsterdam still looks like it did three or four centuries ago, during the Dutch Golden Age, when this was the world’s richest city.

I continue on to a square called Museumplein where Amsterdam’s three big art museums are gathered.

The magic of bungalow parks – including De Eemhof, east of Amsterdam

I stop a moment to take in the square. Long lines plague the Dutch Master-filled Rijksmuseum and Van Gogh Museum – both understandably popular. There’s rarely a wait at the Stedelijk Museum, nicknamed “the bathtub” because of the striking shape of its modern architecture. Inside are 20th-century favorites (Dali, Picasso, Kandinsky) and crazy contemporary art. I’m not a big fan of the abstract style, but the artwork at the Stedelijk is really fun (perhaps really, really fun if you’re into marijuana – sold with a smile in the city’s many “coffee shops”).

The city’s biggest green space, Vondelpark, is just a short pedal away. I roll by snippets of Dutch conversation – families with kids, romantic couples, strolling seniors, and hippies sharing blankets and beers.

A taste of Amsterdam

By now my sense of taste is ready for a little attention. Last night I enjoyed a grand rijsttafel (literally “rice table”), a ritual dish for tourists in Holland. Not a true Indonesian meal, it’s a Dutch innovation designed to highlight the best food of its former colony – specifically to show off all the spices that in some ways originally motivated the colonial age. The dinner includes 20 dishes and a rainbow of spices with white rice to mix and mingle on your plate and palate. Working your way through this tasty experience, it’s clear why the Dutch called Indonesia “The Spice Islands.”

Tonight, I’m in the mood for something lighter and more historically Dutch. I opt for a snack of herring with pickles and onions, with two shots of Dutch gin.

Pedaling back to my hotel, rattling over those shiny cobbles just inches from the murky canals (making sure my zipper is all the way up), I’m thankful I resisted the herring man’s offer for that one last gin.