Prized Signature from Babe Ruth Himself 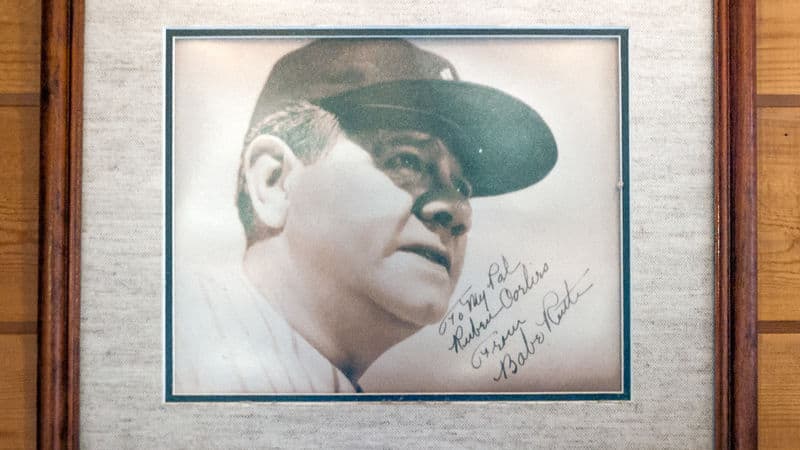 We were on our way home from the ballpark, deep in the underground of New York’s subway system. Imagine the pressure that 12-year-old me felt when approached by another lad who offered his three-ring binder with autographs of several New York Yankee players in exchange for my recently acquired, highly prized possession. Names like Tommy Henrich, Phil Rizzuto, Whitey Ford, Bill Dickey, Joe DiMaggio and Yogi Berra jumped off the pages of his binder as I contemplated his proposal.

Seeking advice, I turned to my dad: “What should I do?” Recognizing the moment as a training opportunity, he replied, “That’s a decision only you can make, son.”

I agonizingly deliberated the choice, looking from one option to the other. Time seemed to stand still. Finally, I declined the offer, tucked my prized treasure under my arm and walked away, pleased with my decision.

What single possession was worth turning down so many autographs? Here’s the story. In June 1948, Dad surprised me with a great birthday present. We were going to attend a major league baseball game at Yankee Stadium.

The excitement of the gift intensified upon arrival at the park. We learned an old timers’ game would precede the scheduled game and the festivities would include a ceremony retiring Babe Ruth’s uniform. To commemorate the occasion, a photograph of Ruth was distributed to everyone in attendance.

Few would remember that the Cleveland Indians were the opponent this day or that members of the 1923 Yankee team were on hand to honor Ruth and participate in the two-inning pre-game. Yogi Berra and Joe DiMaggio both hit home runs off Bob Lemon, and in a year when he started 44 games, Bob Feller appeared as a relief pitcher. Those noteworthy events were lost in the emotion. This was Ruth’s day, and he was in attendance.

These memories remain. Our seats allowed a view of the “Babe.” Looking down on one of the greatest players of all time set the mind in motion. A light went on. What if I could get Mr. Ruth to autograph my picture? That thought expressed started a rigorous father-son banter – one of the few I ever won, even if it was a faint “go ahead and try.”

A CHANCE WORTH TAKING

Babe Ruth was well-guarded, and my attempt to approach him was foiled by one of the ushers. A few wiggles and a quick maneuver broke their hold and I found myself close enough to hear the bambino respond to my request in a raspy voice, weakened by his battle with throat cancer. “It’s OK, it’s a picture.”

It was a moment of glory, but immediately squashed; neither of us had a pen! As I turned, dejected, my eyes fell upon another brazen youth in the grasp of guards. A close look revealed the lad held a pen in one hand and his Ruth photograph in the other. My heart pounded. A swift move that would have been the envy of any NFL running back allowed me to grab both of his possessions and return to the legend. Ruth signed both photographs.

It was an exciting experience. Dad witnessed the episode from his position aloft. Upon my return, he was exuberant. His pride was equal to mine. It is a wonder we didn’t look the ink off the photograph.

Babe Ruth was to live only two months from this day described. It was his final appearance in the place where he had displayed his outstanding talent and the last time he wore the famous number 3. He may have never signed another autograph after this one. It remains a prized possession.

I have never regretted my choice to keep the signed photograph. The gem hung on my wall for daily viewing more than 60 years, and then I took great pleasure bestowing this family heirloom to my son. I’m pleased to share it with one who has the same appreciation of its significance.

It would be a stunning conclusion to this tale if someday I were to meet that other young man and learn about autograph #2.

Bob Layton is a freelance writer residing in Glen Allen