The Blast Zone: KISS’ vets-only concert was explosive, spell-binding, monumental … and the audience was worthy 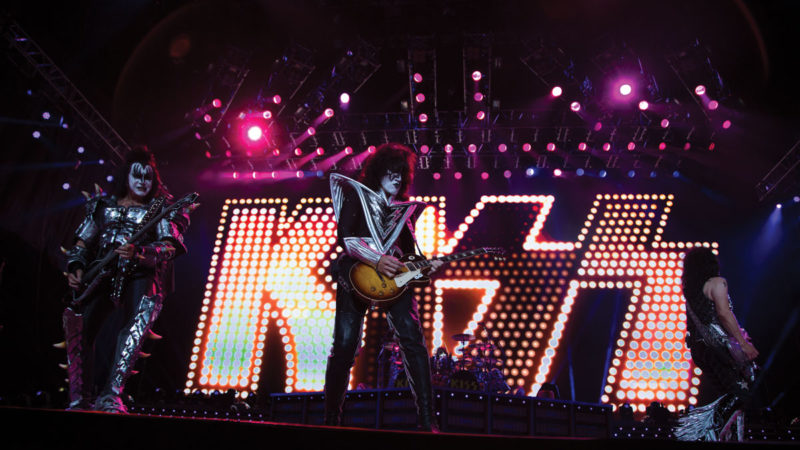 Take away the guitars and drums, the flashy outfits and makeup. Give the four members of KISS jackhammers, pile drivers, crowbars and shovels. After two hours, instead of a concert, you will have a bunker.

These men bust it so hard on stage that, when they’re finished and the last smoke drifts away, you can’t help but look around disoriented, amazed that what you’ve experienced was just light and sound. You expect a building, a pit, a monument, something real. At Jiffy Lube Arena, in a special benefit for 2,000 veterans, in tropical heat and humidity, KISS put on a show of fireworks, balls of flame, sweat, flying, titanic proportion, spitting blood, and music that looked and sounded like the blast zone of a hot nightmare construction site.

Simmons on bass is a consummate entertainer, Stanley’s vocals are strong and matched by tight harmonies from his mates. Guitarist Thayer and drummer Singer are phenoms; when they’re featured the show kicks into its highest gears.

As potent as a KISS show is, this one was outdone by the audience. With a thousand veterans already selected, KISS paid a visit to Walter Reed Hospital days before the show and issued an invitation to the thousand rehabbing wounded warriors there. The sight of so many young men and women in the crowd openly bearing their sacrifices gave the night an almost reverential air.

Good for KISS. Good for all of us.

[Editor’s note: BOOMER helped with ticket distribution for the rock bank KISS at a special veterans-only concert July 19 in Bristow, and conducted a contest to select a vet to interview the band. Here is a review of the concert.]