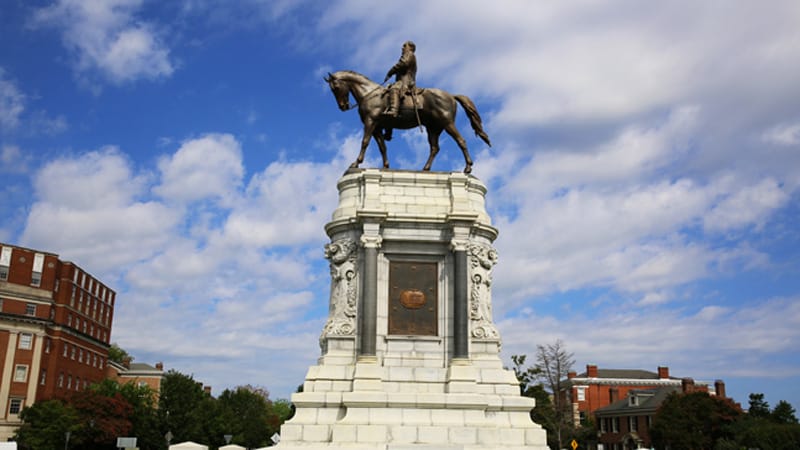 In my Native Son columns, I’ve remained scrupulously apolitical. My essays have been spun from recollection and insights. But for the first – and perhaps last – time, I’m going to toe the line of a national, and deeply local, hot topic. I hope you’ll give me a fair hearing, weigh my thoughts and not attribute this magazine with anything I say here.

I think the Confederate monuments should come down in every city in America. Except Richmond.

As an author of historical novels, I travel often to research. Those places can be out of the way (the Russian steppe, the Saudi desert, Djibouti, Chernobyl). Ten years ago, my research took me to the worst place on earth. Auschwitz.

Auschwitz in Poland is a hellish place. In February, when the snow flies sideways, the sky seems 20 feet over your head. The wind resembles screams and the imagination recoils. The ovens glow hot though they’re empty and cold now; but they once burned with man’s worst hatreds, so they burn forever.

I am a Jew. A lot of my family tree was lopped off at Auschwitz and her brutal sisters in Ukraine, Germany and Poland. Standing in the camp on a bitter day, I felt like the million ghosts were more real than I. They trudged past me, through me. I swear to you, the power and curse of that damned soil is intact.

Standing among victims who’ve been dead for seven decades, I became one of them, because I am. I became very Jewish, and very wounded.

I wanted to tear the place down. The urge felt like keeping faith with those who died there. They, too, must have wanted to wipe the wire fences, towers, chimneys, barracks and pits from the earth.

What if they had? What if the Allies had bulldozed the death camps, buried them in mass graves as an act of justice or penitence?

Across Europe and Ukraine, the remains of the Nazi’s camps are being preserved and restored. In every instance, world Jewry provides support.

They do this for the reason I advocate leaving the statues up in Richmond. The presence of the camps continues the conversation. It gave me a chance to observe, testify and mourn. Dark memory is preserved in those bricks.

In Richmond, what if the statues come down? What else tumbles with them? The conversation, the testimony, the memory of a wounded community – what happens to them in a hundred years with no physical trace?

I love my city. I believe it’s strong enough to stand in the midst of its own history and its victims. Richmond can give the ancestors of slavery, the torch bearers, a place to cry, to remember, and more importantly, to teach.

A discussion must be had about the role of slavery in the South’s fortunes and fall. I ask you, on both sides of this debate: Where better to have that conversation than here, the Confederacy’s capital? In sight of the auction blocks, in the shadow of the monuments to a sad, proud, even ugly, past, let’s talk. For the living who see their honor offended, for the anonymous who’d be thrilled to be recalled and honored, for conciliation and understanding, people! What better thing to claim for our city than to be the podium for this debate?

Tear the statues down, and with them goes the chance for Richmond to be America’s town hall, be where our forefathers put us, at the center of slavery’s legacy. Tear them down, and memories will fade, I promise you.

We can restore the slave market; create and support a slavery museum; add respectful and clarifying context to Confederate statues; mount the foes of slavery on pedestals; celebrate black heroes in bronze and marble. Richmond can do all this and more, easily. We can, just as easily and with 21st-century pride, tell America that if they want to talk about slavery versus heritage, they can talk here, at the epicenter, among gentlefolk and statesmen.

At Dachau concentration camp in Munich, a memorial reads Never Again. Those words stand between us and the horror of such a thing ever recurring. But the words are not opaque; they don’t block our view of yesterday. Let’s make Richmond a city where a bright future is shaped for all, and where we keep an eye on the past. You must understand that if we don’t, the past will sneak away. It might sneak back.

David L. Robbins is a best-selling author of novels such as The Devil’s Horn, The Low Bird and Last Citadel. The Sandston native is the founder of the James River Writers, co-founder of The Podium Foundation and creator of the Mighty Pen Project veterans’ writing program, in partnership with the Virginia War Memorial.