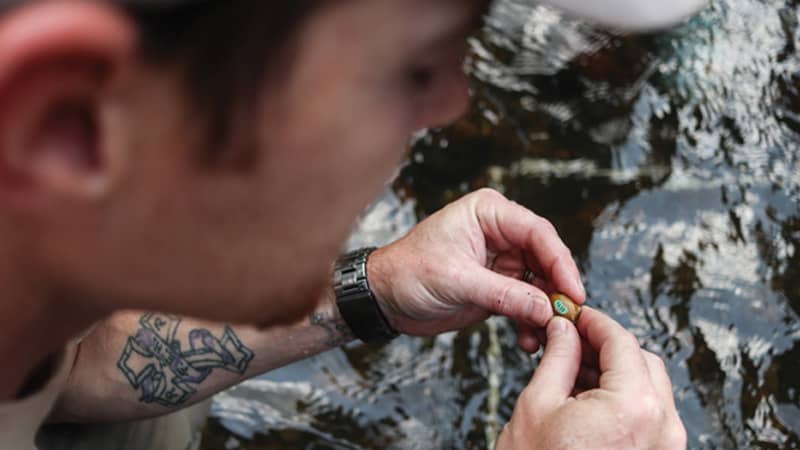 When a tanker truck overturned on Route 460 in 1998, it spilled chemicals into Virginia’s Clinch River, killing stream animals for miles – including the golden riffleshell mussel, found only in Clinch River and a nearby tributary. After the spill, only about 400 of these mussels remained. Nearly 20 years later, the numbers had dwindled further, taking them near the brink of extinction.

Bringing this species back from the brink proved difficult – propagating them in captivity was challenging because the larvae draw nutrients and grow while attached to fish gills.

SCIENCE TO THE RESCUE

Kentucky’s Center for Mollusk Conservation had developed a way to feed larval mussels in a nutrient bath, an easier-to-replicate host than fish. In 2016, the Virginia Department of Game and Inland Fisheries biologists delivered to the center’s director, Monte McGregor, the only three female golden riffleshell mussels they could find that were carrying young. McGregor extracted the larvae and took them to his lab, and the VDGIF biologists returned the three mama mussels to the river.

Finally, on Sept. 21, 2017, 700 golden riffleshell mussels were released into three sites in and near Clinch River that had been deemed suitable for their continued health. Biologists have kept 300 mussels in captivity for future stocking needs.

“Though the stocking of these mussels is a significant milestone in bringing the species back from the brink of extinction, the episode highlights the tenuous nature of stream water quality,” the Fish and Wildlife Service article about the program explains. “While the chemical spill was a lone, rare incident that stressed how quickly and easily stream health could collapse, these mussels are endangered as a result of a long, slow decline resulting from years of habitat loss and low-grade water quality issues.”

Keeping this and many other species vibrant and healthy depends upon the efforts of citizens as well as government agencies. “In addition to being home to a tremendous diversity of life, the Clinch River is a growing river destination for paddlers,” the article adds. “The diversity of life, and the river as an outdoor destination and source of income from paddlers, depend on a healthy river.” A healthy river also benefits anglers and the towns that use it for drinking water.

Thanks to the combined efforts of these agencies and others, the Clinch River and these freshwater mussels are doing swimmingly.