A St. John resident reflects on Hurricane Irma's impacts on his home 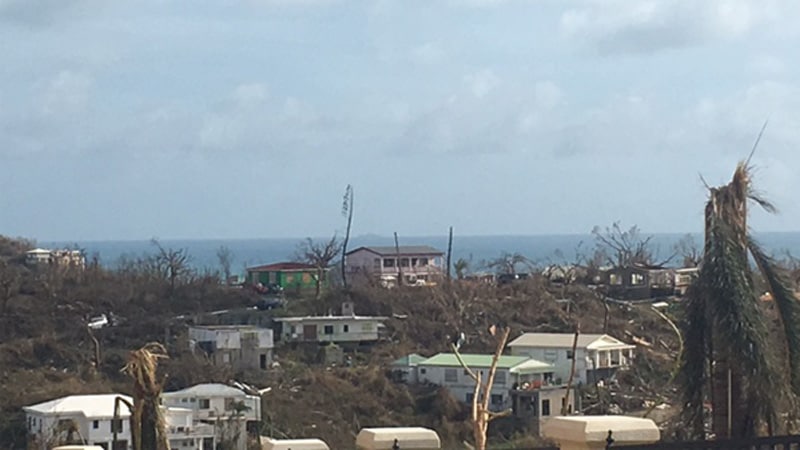 Bruce and Helen Langhorne sit in their living room with a reporter, describing their growing concerns for Davis, their son living in the Virgin Islands during the wrath of Hurricane Irma. “I just would love for him to come home,” says Helen nervously.

Davis Langhorne and his wife, Valerie, had visited St. John multiple times, including once to get married. They fell in love with the island and decided to move there and find work in the service industry. Their plan was to stay for a year and see how it went.

Unfortunately, Davis Langhorne laments, “We didn’t quite make it a year.”

Though they’d had plenty of advance notice of the storm’s arrival, they decided to stay in the area and wait it out. So they stocked up on food and water and took shelter at a friend’s condo, which had been designed to withstand the ferocity of a hurricane.

And then Irma arrived.

“We watched roofs getting blown off of buildings before noon,” he recalls of the morning the storm hit. Their shelter remained safe, until “The wind switched, and things started getting real. Windows were getting blown out … all of a sudden, it sounded like we were stuck behind a gravel truck, or like someone was outside with a BB gun from all of the small rocks hitting the window.”

They made it through the worst of it, but the damage was overwhelming. “It looked like a war zone without dead bodies,” he says. He heard multiple accounts of other people who had taken shelter on the island, including a group who spent five hours underneath a table because their roof had blown off.

Some buildings fared better than others; some, he describes, looked like they’d barely been affected and only had “minor water damage.” Some, however, were completely dilapidated.

And unfortunately, in the midst of the turmoil, a handful of individuals took advantage of the disaster. “The looting,” Langhorne recants, “started immediately. Grocery stores even got looted the night of.”

“Some restaurants were feeding people free food.” He also recalls his birthday, which occurred on one of the days during the storm. His group managed to find a card, some candles and some Milano cookies to help him celebrate.

Eventually, Langhorne and his wife made it off the island of St. John, after finding a spot on a boat to St. Croix. From there, they took a flight to Newark and have been staying with friends in Narberth, Pennsylvania, just outside Philadelphia, ever since.

They do plan on going back home to St. John once everything clears up and electricity is restored. However, he says, that could be months. In the meantime, they plan to find temporary work and housing in Narberth.

And yes, Langhorne’s parents are beyond relieved to know that he’s safe.