Home » Family » Taking My Turn in the Kitchen, by Randy Fitzgerald

Taking My Turn in the Kitchen, by Randy Fitzgerald 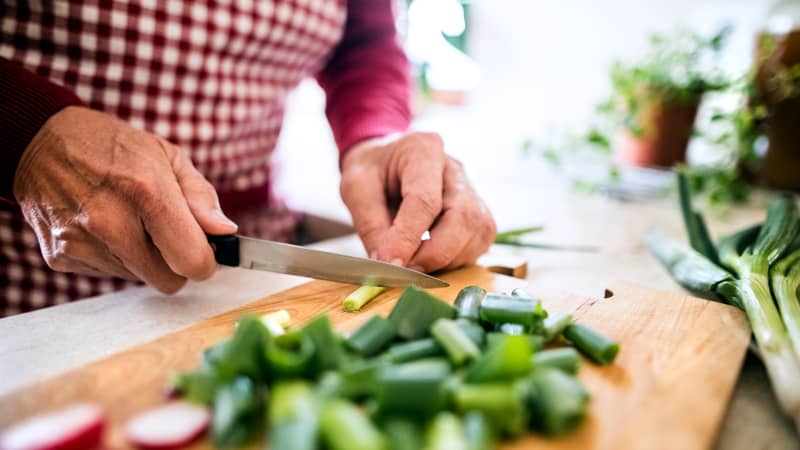 Barb announced the other day that she figures she’s cooked about 65,000 meals in her married lifetime and she’s ready to turn the kitchen over to me. I agree that she’s more than served her time over a hot stove, but with Thanksgiving not too far off, her timing on this reminds me of the country song, “You picked a fine time to leave me, Lucille.”

“But you’re such a great cook,” I protested.

I do believe the odds are against Thanksgiving dinner this year. I doubt my abilities to cook a turkey, make a biscuit or produce a pan of gravy. And the ubiquitous American squash casserole will certainly be out of the question. (Hmm. Is that so bad?) I think I can at least master mashed potatoes – does a cup of milk sound about right?

Most men I know have at least one dish they can prepare with confidence. Maybe they have a spaghetti sauce (mine is Newman’s Own); perhaps they can even create a great meatloaf (meet you at Cracker Barrel). My one claim to fame is that this summer I started making breakfast every morning for Barb and me, frying up fake sausage (Applegate’s Chicken & Sage Sausage Links) and making pan toast. I was proud of my breakfasts until daughter Sarah came to visit and pointed out the stark truth: “Dad, anything is good fried. You could cut off your finger and fry it, and it would probably be delicious.” (Tell me again, people. Why is it that we have children?)

My brother Terry can also cook – in fact, we already count on him for the dressing each Thanksgiving – the best dressing you ever had in your life. He got an early start in the kitchen, and he inherited my mom’s recipe.

CHEF CHILD (BUT NOT JULIA)

When Terry was in high school, he cooked at one of Dad’s places in the summer. (Those of us who couldn’t cook washed dishes.) I recall one sunny day when a customer at the restaurant insisted on seeing the chef, to inform him exactly how he wanted his entrée prepared. The waitress tried to stall him, saying the chef was too busy to come out, but the fellow insisted. So out of the kitchen came my brother Terry, all of about 15 years old, in cut-off jeans and a T-shirt, with the beginnings of a first beard and hair down over his ears. One look and the customer waved his hand dismissively in the air and said, “Oh, never mind.”

I realize as I write this that I do have a dish – the one dish everybody in my birth family loved and all of us could make: macaroni and tomatoes. Most people in these parts seem not to be familiar with that combination, preferring the traditional mac and cheese. Perhaps my parents brought the macaroni and tomatoes recipe with them from Arkansas, but, growing up, that was the comfort food at my house. I still love it, and I can prepare it. Unfortunately, no one else I live with likes it nearly as much as I do.

Barb and all the wives out there who have cooked a zillion meals more than deserve a break. I’m going to do more in the kitchen, but my skills being what they are, I have a feeling she won’t completely disappear from the scene. Also, now that I reminded her of Sarah’s comment about the fried finger, I have seen her examining her morning sausage links a bit more intently.