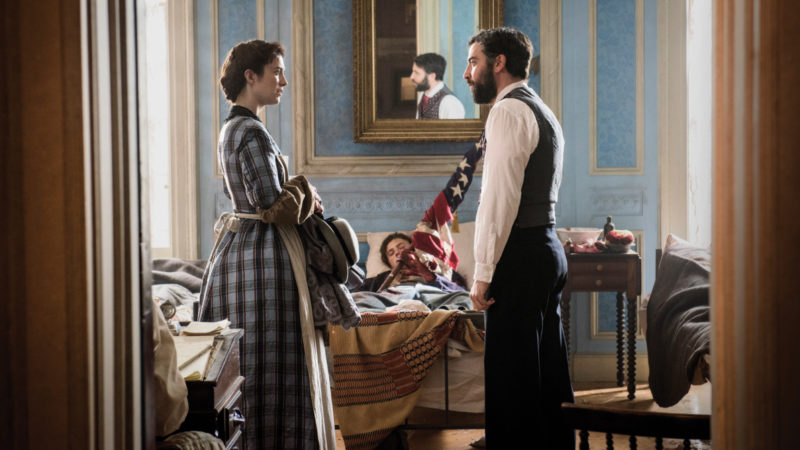 Just a few years after Stephen Spielberg transformed Virginia’s State Capitol into the White House for Lincoln, Richmond and Petersburg continue to be a hotbed for Civil War drama (not to mention other films).

The latest entry is Mercy Street, a six-episode weekly Civil War drama that began Jan. 17 on PBS and runs through Feb. 21. Set in Alexandria but filmed in Richmond and Petersburg, Mercy Street traces the lives of two volunteer nurses on opposing sides of the war, telling the stories of those struggling to save lives while managing personal hardships.

The show’s co-executive producer, Lisa Wolfinger, has the inside story. We talked recently, and here are excerpts.

BILL BEVINS: THANK YOU FOR JOINING US. THIS IS SO EXCITING TO HAVE PBS DO A SERIES THAT’S BASED IN VIRGINIA – BECAUSE WE ALL KNOW WHAT PBS CAN DO, THANKS TO DOWNTON ABBEY. ARE THERE ANY COMPARISONS AT ALL?

LISA WOLFINGER: I like to say it’s like comparing apples and watermelons. No, they’re very different shows. I would say they share a similar tone at times because our show definitely has a sense of humor, and it’s a smart script – it’s witty. And we have a terrific cast who are all very adept at comedy. So, you can think of the Civil War as a rather grim period, and certainly it was. We have found a way to bring the humor out of it.

SHELLY PERKINS: LET’S TALK ABOUT SOME OF THE CAST. YOU HAVE SOME BIG NAMES IN THIS MINISERIES. Yes, we do. We have a fabulous cast, and we worked very hard to put together an American cast as much as possible. We have Josh Radnor, who played one of the leads in [the hit CBS show] How I Met Your Mother for many years, and he actually plays one of our leads. He’s a Union doctor who grew up in a plantation in Maryland – so there’s some interesting political conflicts – and he’s a very forward-, brilliant-thinking doctor. And he comes into conflict with one of our lead ladies, Mary Phinney, who was an Abolitionist and a volunteer nurse at our Union hospital. She’s played by Mary Elizabeth Winstead, who has done many films – the one that pops to mind is Abraham Lincoln: Vampire Hunter. She actually played Mary Todd Lincoln, ironically, in preparation for our series. We have an unknown actress just starting out playing Emma Green. Her name is Hannah James, and she’s actually from Charlottesville, Va.

BB: THE SETTING IS ALEXANDRIA, VA. WE’RE IN THE CIVIL WAR, AND THESE ARE TWO WOMEN: ONE FROM THE SOUTH, ONE FROM THE NORTH. THEY’RE RIGHT NEXT TO EACH OTHER WORKING, AND OBVIOUSLY THAT CAUSES SOME PROBLEMS. WAS THIS ACTUALLY SHOT IN THE RICHMOND AREA? It was shot in the Richmond area. The story is actually set in Alexandria, but we decided to film in Richmond and Petersburg just for budgetary reasons. It made it easier. We actually filmed our hotel-turned-hospital – which is really the centerpiece of our series, in the same way that Highclere Castle is the centerpiece of Downton Abbey – and we filmed that at a place called Laburnum House, which is a historic home in Richmond. And we used the interior of Laburnum House as our hospital interior, and then we shot many of our exteriors in Petersburg. And we also shot at a beautiful place called Centre Hill in Petersburg and actually Carlyle House in Alexandria, which was the home of the Greens, the Southern loyalist family that we focus on in Alexandria.

SP: AS YOU MENTIONED, THIS MINI-SERIES HAS A LOT OF HUMOR IN IT. AND I’M A BIG GONE WITH THE WIND FAN, SO ARE THERE GOING TO BE SOME COMPARISONS WITH THAT AS WELL? Well, we certainly have pretty dresses and hoop skirts. No, I’d actually like to say, in some ways this is a combination of M*A*S*H, in terms of the medical drama and satire and sense of humor, and Gone With the Wind, because we do tell parallel stories. One is the story of this Abolitionist volunteer nurse from Concord, actually. And then on the other side of the conflict, we have young Emma Green, who is a Confederate belle. Her family, the Greens, own the hotel that’s been turned into a hospital by the Union army – and we tell their story. So part of this series is a family saga, a Southern family saga. So in that sense, there are certainly some echoes and parallels with Gone With the Wind.

SP: THE HUMOR OF M*A*S*H AND THE FASHION OF GONE WITH THE WIND. I LOVE IT. I HAVE ONE MORE QUESTION FOR YOU, LISA. WHAT IS THE MESSAGE? I KNOW SOME OF THE THEMES OF THIS MINI-SERIES ARE GOING TO BE REALLY RELATABLE TODAY. Well, that’s a good question. It’s primarily entertainment, and we want people to be drawn in and fall in love with our characters. But it’s also a fresh window into a rather tumultuous period in our history – and an extremely important period in our history – because the Civil War really helped define who we are today. And certainly many of the themes we deal with today, really, the seeds were planted during the Civil War and before. Whether it’s polarizing politics, issues of race, of gender, all of that really got its root in the Civil War.

BB: THE SHOW IS CALLED MERCY STREET. IT IS GOING TO BE THE NEXT HUGE HIT ON PBS. AND WE’VE BEEN TALKING TO THE CO-EXECUTIVE PRODUCER, LISA WOLFINGER. LISA, THANK YOU SO MUCH, AND WE CAN’T WAIT TO SEE ALL THOSE PETERSBURG AND RICHMOND SCENES IN THE SHOW. Well, I hope you enjoy it. I think there’s something for everyone in this series, and as I said, it’s a Civil War show, but it has heart, it has soul, and it has a sense of humor.

Bill Bevins and Shelly Perkins, teamed as a Richmond radio fixture since 2001, are morning hosts with Easy 100.9.