The Richmond band of toe-tapping music and good-hearted fun 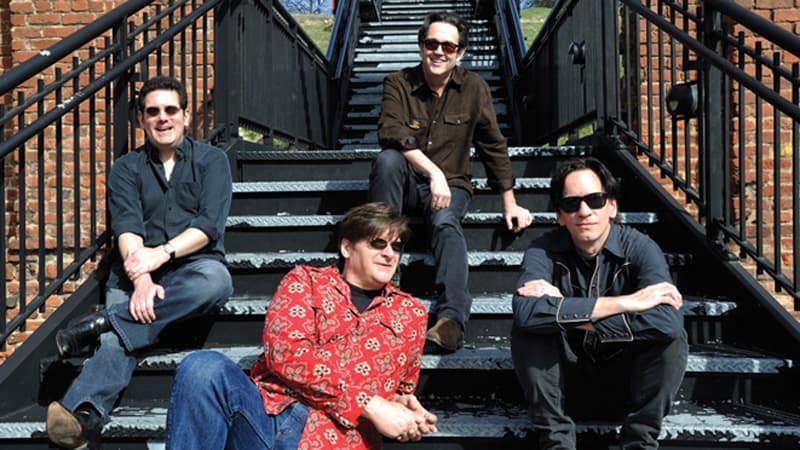 The Taters band has been planted in the Richmond music scene for two decades, showering crowds with their distinctive blend of rock, roots and Americana. Founding member Craig Evans talked to Bill Bevins about The Taters’ historical highlights, what it’s like to play alongside the Richmond Symphony Orchestra and how the band has managed to stay together for so many years.

Bill Bevins: Very excited to have a really good friend of ours in studio, Craig Evan from the Taters. Didn’t bring the tots with him today. The Taters have been around for a long time. You guys have an anniversary this year.

BB: I think a lot of people that I know have been in a band at one point or another.

CE: A lot of them have been in this one.

BB: If you’ve ever been in a band, you know that it’s a relationship. Like any other relationship, it can be fraught with problems. “I want to play it this way, you want to play it that way.” How do you keep a band together that long? I know you change people in and out every once in a while, but the core of the band’s been the same.

CE: Myself and Brad Tucker, we’ve been in it since the beginning. It started out as a duo, then we added a drummer, and over the years we’ve had, like you said, different people move in and out. The current group is Greg Marrs on the guitar and Chris Mendez on drums. This unit has been going now for almost eight years.

BB: You’ve evolved over the years, but vocals have always been a big part. I know you guys write your own. Do you add cover songs?

CE: Yeah, we do. Most often the cover songs come in one of two ways. Often it shows up at a live show, third-set kind of thing where we’re amusing ourselves – something we haven’t tried before. Sometimes, there might be an occasion because of something in the news. We had a show a couple of months ago, right after Glen Campbell had passed away – we pulled in six songs [as a tribute].

BB: You and Brad work together so well. The harmonies are so good. I know you do stuff like the Everly Brothers that’s harmony driven. Is that something that’s gotten better over the years, or was that there day one?

CE: I think some of it was there early on. I don’t know if it drew us to each other, but one thing we both enjoyed early on was harmony singing. Brad and I started playing together back in the early ’80s, and the Taters started off in ’97 as the Burnt Taters.

CE: I don’t know why I thought that was a good idea at the time.

BB: I like it, actually. Is there one event that you can remember, out of all of those thousands of gigs you’ve played? I know you just recently played with the [Richmond] Symphony [Orchestra].

CE: That actually might be it, for me at least. In February, we did a full show with the Symphony at the Cultural Arts Center at Glen Allen. And we did a short version of that last weekend down at Westchester Commons, again with the Symphony. And it was a thrill! For three of our songs, they got arrangers and wrote up full scores for us.

BB: So you got to see a full symphonic score of one of your songs?

CE: Yeah, I’ve actually got it printed out just to look at. I don’t understand all of it, but it sounded good to me.

BB: So I got a chance the last couple of years to be with the Symphony on the Fourth of July.

CE: Did you do the cannon?

BB: I did. Thank you for pointing that out. So, you walk up on that stage, with however many musicians are up there, all of them the best musicians you’ll meet. Were you intimidated?

CE: I think I was, the first night at the rehearsal. Partly because I wasn’t really sure exactly how to talk to them musically. So we talked to the conductor and told her what we were looking for.

BB: She would translate?

CE: She’d turn around to the orchestra and tell them what we really said. She was great.

BB: I wish I could have been there for that one. Let’s talk about your musical influences and Brad’s. So when you were 17, who was your favorite musician?

CE: I grew up heavily into Beach Boys, Elton John, and they still show up sometimes, at least as far as melodies and the ways that I’ll harmonize a song when I’m writing something out – what kind of a bass line I might put in or something like that. Brad grew up very much on the ’70s acoustic guitar singer-songwriters, so he was hugely into John Denver, James Taylor, folks like that.

When the late ’70s hit, I had started playing in bands. That’s when a lot of stuff started to change. When Nick Lowe’s first album came out in the United States, Pure Pop for Now People, he drew from earlier sources, a lot of early ’60s kind of things. With the whole punk and the new wave, you get the kind of resurgence of British pop. Although I had lived through that as a kid, I kind of missed it musically. That brought all of that aspect into it for me.

BB: How would you describe a typical Taters set?

CE: I don’t think there is a typical set!

CE: Well, it is fun. With few exceptions, we generally have fun. You mentioned the idea of the relationship in a band earlier. We’ll go through times where there’s disagreements or one person wants to do something this way, one wants to do it another. But most of the time, we’re kind of blessed with the idea that when we get on stage, everything seems to gel, to fall together. I think everybody’s enjoying playing the songs, whether it’s one of our songs or a cover song.

If they have anything in common at all, it’s the vocal prominence. All of them are vocal songs. We’ve got a couple of instrumentals that we put in, and obviously guitar leads and instrumental breaks and things like that. But I think the vocals are kind of what stand out for us and to audiences and, like you say, the fun. We have fun doing it. I think most of the time the audience has fun being a part of it.

Things happen in the middle of shows and songs – we often tell people we do no two shows the same. And it’s true, but it’s not always on purpose. It’s just how things go.

BB: You guys are goofballs. There is a lot of fun onstage, and you play off each other. It’s almost like comedy musical shows. I always enjoy it – great quality music and really good laughs. Thanks for doing it.

CE: Oh, we love it. We’re happy that people are enjoying it.

BB: Thanks to the Taters – they’re not burnt yet. They’re still going strong.

Keep your eyes on The Taters at TheTaters.com.

Four Small Town Boys Who Made It to the Big Time