Columnist Randy Fitzgerald and his wife join another couple for quite the summer journey. 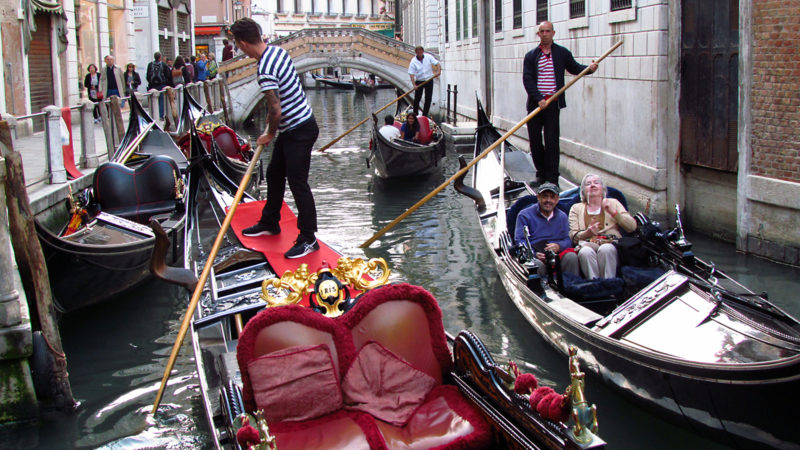 Each year since I retired (for the second time) in 2012, Barb and I have set off at the first sign of warm weather on our version of “A Great Adventure,” and the one this year was our most ambitious yet, especially for a party of septuagenarians. (Our New Jersey cousins and favorite travel companions, Marva and Norm, were with us, the better to look out for one another.) Our Fearless Foursome started with a two-week transatlantic cruise that ended in Barcelona, then rented a car and drove all over the South of France and across Italy, ending up in Florence and Venice.

Actually Barb drove all those places, down the narrowest of streets in the worst of traffic, among flying cars on busy highways, up and down hills with few railings and steep drops, high up into dark tunnels in the Alps – all in the biggest SUV she’d ever driven. She had nerves of steel, saying later that when in tough spaces, she pretended she was just in an unfamiliar part of Richmond or, on the Italian autostrad, that it was I-95. However she did it, we turned in the car two weeks later in Venice, without a scratch. We began this trip with a great omen. As we boarded ship, a 99-year-old woman traveling alone was nearby. If she could do this, surely we could master five countries in 30 days. For further reassurance, we quickly found out what happens if you get very ill while cruising. A few days out of our Fort Lauderdale sailaway, the captain announced that we were headed to an unscheduled stop in Bermuda. A passenger had been stricken with a medical problem too serious for the medical crew to handle, and we were taking him to the nearest land fortreatment. When we got close to Bermuda’s shore, a little boat came out, took the patient aboard and rushed him off to the island. It was good to know that the ship would do what was necessary in an emergency. We never found out what happened to him or what was wrong, but Barb feared it was the kiss of death when our British captain referred to him once as “the poor devil.”

That delay resulted in the captain’s giving us an unexpected stop in Lisbon, a beautiful city but too hilly to go well with my angina. There is so much there that recalls Portugal’s long-ago role as the first real sea power, including a marvelous coastal monument with the figures of all the famous Portuguese explorers you remember from fifth grade: Magellan, Vasco da Gama, Cabral, Prince Henry the Navigator. Each of them is mounting a stairway to the stars, their faces looking out to sea, from a country once all powerful, but (Ozymandias-like) not so much anymore. It happens.

I have a scary and funny story about Gibraltar, but right now just enough space for “a moment”: Near the end of our tour, the guide took us to a spot on the southeast side of the peninsula, from which we could look across to the coast of Africa, 22 kilometers away. It was a powerful sight, Africa in the mist, and I loved knowing I was so close to a different world.  In my mind I was hearing, “The wind is in from Africa, last night I couldn’t sleep.”

By chance we ended up in Cannes the very week of the film festival and in Monte Carlo the week of the Grand Prix. Imagine the congestion! Both cities were resplendent with Beautiful People, and though we never saw George or Leo or Julia, we were well aware of sharing space with them. I tried to stay duded up for the occasion in my Richmond Folk Festival T-shirt.

I’ll write more about the trip next issue and share some observations on Monaco, Barcelona, Florence and Venice, and introduce you to some people we ran into from Midlothian. And I have to share a perfectly symbolic, totally indecorous and very funny story about the gondola ride Barb and I had on our last night in Venice.

Aren’t you lucky you don’t have to watch our slides?