1950s Famous Studio cartoons should be brought back for public enjoyment 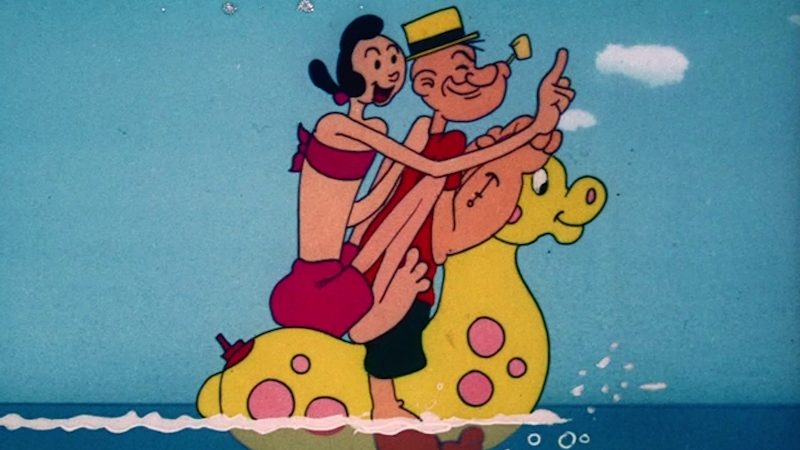 Steve R. Bierly, a long-time Popeye fan and writer on the classic cartoons, brings attention to the “lost” Popeye cartoons – an abundance of worthwhile cartoons from the 1950s that remain hidden in vaults when they could be shared with viewers young and old.

Do you remember the role-reversal cartoon where Olive Oyl had to eat spinach to save Popeye from a brawny hillbilly woman? Or how about the one where Bluto disguises himself as Santa Claus on Christmas Eve to get rid of Popeye and make time with Olive? Or the one where Olive won’t go to the beach with Popeye and Bluto unless they promise to stop fighting, and Popeye wins the day by feeding Bluto the spinach, turning him into a robotic boxing machine? Or how about when aliens turned Popeye into an old man using their Cosmic Ager and later disintegrated him? Or when Popeye and Olive Oyl are menaced by ghosts that looked like they were from a Casper cartoon, but talked with British accents?

If you grew up watching Famous Studios Popeye cartoons when they were endlessly broadcast on TV beginning in 1956 and lasting, in some markets, into the 1970s and ’80s, and later seen on Turner cable stations, chances are you remember these films. They are all Popeye cartoons made in the 1950s.

Though we remember them, they often get no respect. Critics say that Famous Studios began cutting corners on the animation to save money, but all the studios were doing that.

They say that Famous Studios remade some old Fleischer Studio cartoons, but while the basic plots may have been the same, there’s quite a lot of differences between, say, the Fleischer’s A Clean Shaven Man and Famous Studios’ Shaving Muggs and between Vim, Vigor and Vitaliky and Gym Jam.

It’s also said that the ’50s cartoons reused old gags. But every studio did. The creators were making films they thought would be shown in theaters for a short run and then would basically disappear. No one dreamed they would be sold in syndication to TV where viewers could compare them. And many of those creators earlier in their careers worked on the Fleischer films, which the critics love.

Critics maintain that the 1950s cartoons relied too much on the romantic triangle of Popeye-Olive Oyl-Bluto, but of the 62 cartoons from that decade, only 23 have this as their main plot, and among those 23 are some of the all-time best romantic cartoons.

Did I say, “Romantic cartoons?” Yes! Famous Studios put the Popeye cast in plot lines taken from America’s collective fantasies. For example, a lifeguard flirts with a beach bunny in Beach Peach, an athletic instructor and a vacationer at a resort fall for each other in Vacation with Play. And Famous Studios made Olive Oyl and Bluto (and Popeye’s other rivals) into romantic leads by making them more appealing in terms of personality, looks, and voice than they had been in the Fleischer cartoons. Despite the outrageous slapstick and the puns, these cartoons made in impression on me (and others who have corresponded with me) while we were growing up.

Speaking of outrageous slapstick and growing up, when I was very young, I was glued to my television set in suspense wondering how Popeye was going to get the spinach this time. I thought the cartoons were adventure stories. It never occurred to me that they were supposed to be funny! Winston Sharples’ great musical scores added to the tension. He could conjure up any mood required from elated to romantic to shock to hopelessness to triumphant. As I got older, I found the over-the-top cartoon violence that Famous Studios was known for to be fascinating and haunting. For example, Bluto uses a gigantic steam-powered pile driver on Popeye’s head to push him into the ground in Friend or Phony. How did the creators come up with these things?

Unfortunately, today’s kids, and adults for that matter, may not get a chance to experience these cartoons, and boomers may not get the chance to revisit old friends. The 1950s “lost” Popeye cartoons, aside from the few that are in the public domain, haven’t been released on DVD or Blu-ray yet.

According to posts on Jerry Beck’s Cartoon Research and Leonard Kohl’s recent article in the Official Popeye Fanclub News-Magazine, there’s maybe some hope that we’ll see releases of restored prints in 2022, but the date has already been pushed back many times. There’s a good chance that we’ll never see those discs. MeTV is showing Popeye cartoons up through the 1940s, but none from the 1950s. This is a shame because the 1950s cartoons were always part of the syndicated packages and many of us associate them with the idea of Popeye on TV. Is every 1950s cartoon a gem? Of course not, but there are many hits among the misses, and they are all part of Popeye’s history and our collective cultural history.

If you would like to see the 1950s Famous Studio Popeye cartoons – these lost Popeye cartoons – shown on MeTV, it wouldn’t hurt to let them know. The person to contact is Neal Sabin, email address: nsabin@wciu.com. Request that the Popeye theatrical cartoons from 1950-1955 be shown. And make sure to thank him for all he’s done for fans of classic cartoons.

Steve R. Bierly is a retired pastor, a long-time columnist for the Official Popeye Fanclub News-Magazine, and the author of Stronger Than Spinach: The Secret Appeal of the Famous Studios Popeye Cartoons (Bear Manor Media, 2009).