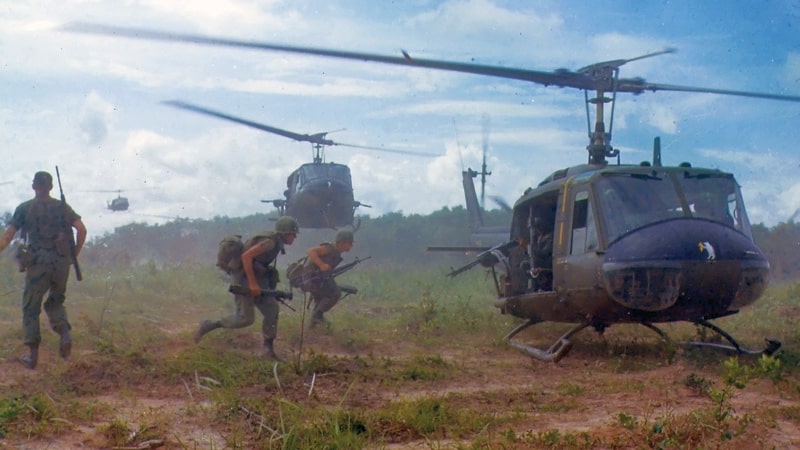 Robert flew home from Vietnam in 1969 to attend the funeral of his best friend, a young Marine lieutenant like himself. His friend was killed in battle when lightning struck an observation tower from where he directed artillery. For an hour, Robert stood behind the casket at parade rest, wearing the same uniform as his buddy, willing himself not to weep. Months later, back in country, Robert took shrapnel in his hip. He had only hours before he bled out. Robert’s combat company commander made desperate calls for a “dust-off,” a medical chopper to evacuate him. No pilot was willing to fly into a contested landing zone at night. The captain made a last plea over the radio. One pilot answered. He told the captain to set up and defend a perimeter, drop flares for a landing spot, then get Robert onboard inside a count to 10. The chopper zoomed in, a firefight ensued, and Robert was hustled onboard and away. Three days later he awoke in a hospital. To this day he does not know the name of the chopper pilot. In his poetry, Robert calls him “Guardian Angel.”

After his tour of duty, David arrived at the San Francisco airport in the autumn of 1969. There he suffered all the indignities a crowd could heap on a teenage soldier returning from Vietnam. He tried to acclimate to life at home after so much life and death in the jungle. In Vietnam, he began to hear a Voice, a quiet whisper which told him many times to go left or right, stop and listen, that lit up the darkness for him to run full-tilt to save himself. The Voice protected him, then came to California with him. It whispered and saved him more, but now from himself, from drugs and drink, bad choices and rotten luck. David tried to tell his mother about Nam but she was glad that her son was safe and wanted to hear nothing of war. His abusive father was no one to confide in, his friends thought him borderline crazy. A Hells Angels gang took him in, but this wasn’t his destiny. David wanted to know the Voice. Who was it? He went back to where it began. He did two more Army tours in Vietnam, and stayed alive through so much danger that afterward he embarked on a 50-year mission to understand how. He writes every day about the power, the whisper, in his soul.

Richard, in his own words, “sat on my helmet, beneath my poncho, in a thousand-year rain.” In 1969, he was his company’s point man, alone and out front in the bush. Richard believes he could hear ants. In stunning prose, he writes of fishing in perfect blue waters, depicts calm and beauty with a meticulous eye. Richard credits his descriptive abilities on the page to how he learned to study detail while searching for Viet Cong.

Kathleen, a 10-year-old girl in Ohio in 1969, was told by her father to stop the neighborhood boys from bullying her little brother. He gave Kathleen a baseball bat and five dollars to go clear up the situation. He said to bring the bat back “with blood on it.” Retired now from the military, she writes personal essays on will, spirit and an unwavering sense of justice. Without these, neither she nor any woman could have become a warrior and a colonel in the Marine Corps.

Randy’s life was saved by a dog on a mined trail.

A bereaved mother threw the flag at Larry’s boots.

Steve dragged a mocking soldier into the smoke of a burning helicopter to smell the charred remains of the crew.

Malik eliminated a machine-gun nest, rescued his squad and in the process took the lives of several Vietnamese children. He was awarded a Silver Star.

I was 15 in 1969. I liked basketball, books and a girl. I had no inkling of the lives of the men and women I would meet 50 years later in a veterans’ writing program I founded with the Virginia War Memorial, called The Mighty Pen Project.

I can’t tell you how fortunate I am to have these stories pass through my hands. I serve as the writing teacher for these good men and women, who have told me, politely, I would not have done well in uniform.

But knowing them, teaching them, reading them, is my good luck. If you’re a veteran, share a story. It needn’t be about the military or anything sad at all. Just tell someone you love, or trust, or want to bless, about your 1969.

Best-selling author David L. Robbins is founder of the James River Writers and co-founder of The Podium Foundation. Learn more about the Mighty Pen Project veterans writing program at VAWarMemorial.org.