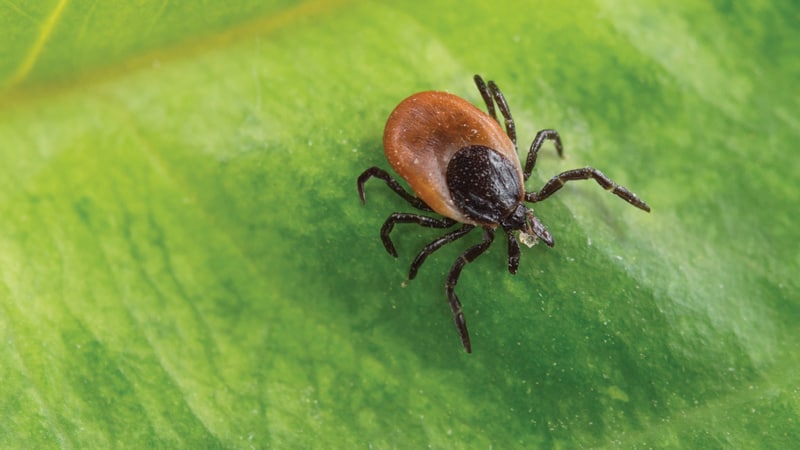 It’s a bit ironic – I’ll fearlessly jump on the back of a horse who towers far above me, despite past horse-related injuries. However, a tick – a creature smaller than my fingernail – sends me into a state of near-panic. It doesn’t seem to make sense, yet it does, knowing the absolute havoc these tiny arachnids can wreak.

Before you thank your lucky stars that you’re not a hunter, hiker or other person who would get bitten by a tick, consider this: if you garden, walk on grass, have a pet, spend any time outside – or spend time with someone who does – you could be bitten by a tick. Although many who are bitten never experience symptoms worse than a typical mosquito bite, ticks carry a number of diseases with serious and sometimes lifelong consequences, such as fever, muscle aches, joint pain, headache, fatigue and even a severe allergy to red meat.

“I had repellent, I just didn’t use it. I didn’t think it was warm enough for ticks to be out,” Christian Melgard tells me. And yet, the simple use of that repellent could have spared him a six-day stay in the hospital and extensive testing, including a spinal tap.

After Christian returned from hunting in near-freezing temperatures, he found a tick and removed it quickly. And given the 10-day span between the bite and symptoms, it wasn’t an easy diagnosis.

“He has had ticks on him before, and for longer, [so] we didn’t even think about it when he got sick,” his wife, Katy, tells me. Three visits to urgent care and a visit to the emergency room didn’t yield any diagnosis of the actual illness, ehrlichiosis, since the symptoms presented like flu or a sinus infection. It wasn’t until an ER doctor specifically questioned him that he remembered being bitten. “Anyone going outdoors … can spray repellent on clothes and shoes the night before – it’s such an easy prevention,” Katy advises. Fortunately, ehrlichiosis is treatable with the proper antibiotics, and Christian made a full recovery.

Law enforcement officer Karin Bakken was not as fortunate. After participating in an outdoor kids’ camp almost 13 years ago, she removed several ticks, but not before she had been infected with what was later confirmed as Lyme disease. Though the disease has been in remission on and off, it has rendered her unable to continue in her career.

Lyme disease, which is transmitted through the bite of infected blacklegged ticks, causes symptoms including fever, joint and nerve pain, headache, fatigue and a skin rash. Untreated occurrences can spread to the joints, the heart and the nervous system. According to CDC data, there were 1,041 reported and confirmed cases of Lyme disease in Virginia in 2017, and 616 more probable cases. Recovery from Lyme disease can last for weeks, months and sometimes longer. Lyme-infected patients sometimes do not even realize they have been bitten until weeks or months have passed, diminishing the effectiveness of treatment and chances of overcoming the illness. Although Lyme is rarely fatal in young adults, seniors are the most vulnerable and more likely to die in extreme cases. In some cases, as in Bakken’s, people suffer chronic and ongoing illnesses that vary in severity.

Another complication of tick bites involves allergic reactions to alpha-gal, a sugar found in mammals such as cows, sheep and pigs. Living with alpha-gal sensitivity has been an unwelcome challenge for Michael Cook. “I discovered the tick bite in June of last year … but I didn’t get the official diagnosis until September,” he recalls.

Cook began to notice that eating pork, beef and other meats would cause allergic-type reactions. Typical symptoms, which appear several hours after eating, include itching, swelling of the tongue and throat, shortness of breath and difficulty breathing.

After three trips to the ER and an accurate diagnosis, he now carries an epi-pen for emergency situations. Physicians recommend that patients strictly avoid red meat and dairy (though the sensitivity does sometimes fade). Out of necessity, Cook has become an obsessive label-reader, since mammal byproducts can show up in unexpected places, such as gelatin and coated aspirin, and cause a reaction.

As Benjamin Franklin famously said, “An ounce of prevention is worth a pound of cure.”