That annoying ringing in your ear called tinnitus 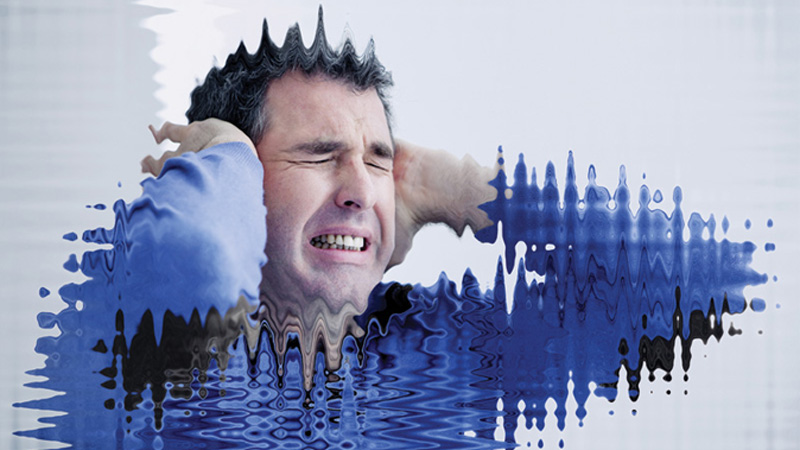 Just about everyone has experienced ringing in the ears – after attending loud concerts, working near noisy equipment or perhaps even from being near a sudden bang or explosion. The universal symptom of ringing in the ears is most commonly associated with tinnitus, but there are many possible and perhaps even more unknown physiological and disease-related causes for this condition. As a result, diagnoses, treatments and prognoses for tinnitus are equally diverse.

Alicia D.D. Spoor, Au.D. of Designer Audiology LLC, defines tinnitus as hearing sound when no external acoustic source is present. This phenomenon can be intermittent or constant and can manifest as a sense of foreign sound in one or both ears. According to Mandy Sanders, Au.D., audiology director of Virginia Ear Nose and Throat, “The perception varies among patients but has been reported to sound like a ringing, hissing, rushing, roaring or pulsing that can vary in pitch.” It tends to be most noticeable in quiet surroundings when there is very little ambient noise – so it can significantly impact quality of life by disrupting sleep and other attempts at relaxation. The American Tinnitus Association (ATA) reports that more than 50 million people in the United States alone experience the condition.

Jennifer Derebery, M.D., of the House Clinic in Los Angeles, is considered one of the country’s leading experts on tinnitus. She clarifies that tinnitus itself is a symptom and not a diagnosis. “We now know it is actually excess neural activity in the brain, rather than the inner ear, so it can affect even those with hearing loss. If we can address the cause of hearing loss and provide treatment, it will very often improve the tinnitus.”

Sanders notes that although tinnitus tends to co-exist with hearing loss, it can also occur without it.

Duane Knight, COO with Neuromonics Inc., further explains that at its core, tinnitus occurs as a result of changes in a person’s auditory system, which leads to increased and altered neuron activity. The brain then interprets this altered activity as sound. “What is important to understand is that tinnitus is about the reaction to this perception of sound rather than the perception itself.”

Since there is presently no cure for tinnitus itself, symptom management is the usual course of action. This is typically focused toward treating the underlying cause. According to the ATA, there are well-established tools and treatments that can significantly reduce the burden of tinnitus. With perseverance and support from trained health-care professionals, these options often help tinnitus patients – even the most severe cases. Sanders clarifies: “There are various forms of management; however, not all treatments provide the same result for all patients.”

Because tinnitus does frequently occur with hearing loss, hearing aids have long been an effective form of management and relief for many individuals. Derebery agrees: “As paradoxical as it may seem, putting sound back where we don’t hear it is generally the best treatment of tinnitus in those patients who also have associated hearing loss. We seem to be ‘hard wired’ to hear, so when we don’t hear expected sound, the body will often ‘fill in the blank’ with tinnitus.”

Other treatment options are focused toward habituation/rehabituation and maskers/sound therapy systems. Spoor contends that one of the most popular treatments of tinnitus is sound therapy. “This generally includes an external sound source introduced to the patient.” Sound is delivered either at the ear level or by using an external device like a sound machine.

The specific sound used depends on an individual’s tinnitus evaluation. “Since most people are bothered by tinnitus symptoms at night, a specialized noise generator or even a fan can be a tremendous help at bedtime,” Sanders adds. Such soft, soothing sounds (or “white noise”) introduced at night or during quiet periods (when symptoms are often worse) are very effective at drowning out tinnitus, distracting the brain and allowing sleep.

“Natural, relaxing sounds like ocean waves or raindrops are best,” says Derebery. Tinnitus maskers can be downloaded on cell phones and MP3 players or even combined for simultaneous use with certain hearing aids. They can also be purchased as sound systems, many of which are quite inexpensive.

LOOKING DEEPER INTO THE ISSUE

As with most health-related issues, new treatments and experimental innovations are always being developed.

Sanders notes that encouraging results have been shown with recent sound-stimulation programs. “These options are calculated specifically to the pitch and intensity of the tinnitus. There are varying types of stimuli that are used to help mask the sound of the tinnitus, and in some devices they can be turned on/off by the patient at times when the tinnitus is most bothersome.” However, what works for one individual does not always work for another.

There have also been clinical trials to determine whether deep brain implants in the area involved with hearing can help severe sufferers when other treatments have failed.

Gabapentin, used most commonly for partial seizures and neuropathic pain, is helpful in some patients. New research is also showing that pulsed magnetic field therapy might benefit the condition.

One of the more interesting experimental treatment possibilities for tinnitus is reported by Laura Friedman, communications and programs manager of the Hearing Health Foundation (HHF). Since hair cell loss in the Corti (the organ containing sensory hair cells required for hearing) leads to hearing reduction, missing hairs may cause persistent imbalances in the auditory nerve, resulting in tinnitus. To address this possibility, the HHF’s Hearing Restoration Project is working to discover factors that would allow new human hair cells to be regenerated and restored in the Corti, or to convert non-sensory cells into hair cells.

As the medical and audiology communities continue to better understand tinnitus, new and more effective treatments are always becoming available. Although often frustrating, tinnitus is rarely serious. But if you are experiencing constant, unexplained noise, experts highly recommend consulting with a hearing-care professional.

Christopher Cussat is a freelance writer whose features have appeared in dozens of regional and national publications. His recent chapbook of poetry, Fallen Leaves, was the recipient of the 2015 Vibrant Poetic Voices Award, which recognizes poets whose contributions to the written word are redefining the genre. Christopher is also an adjunct professor of English for American Public University and American Military University. Cussat.com.