Home » Family » Prostate Cancer: To Test or Not to Test

Prostate Cancer: To Test or Not to Test 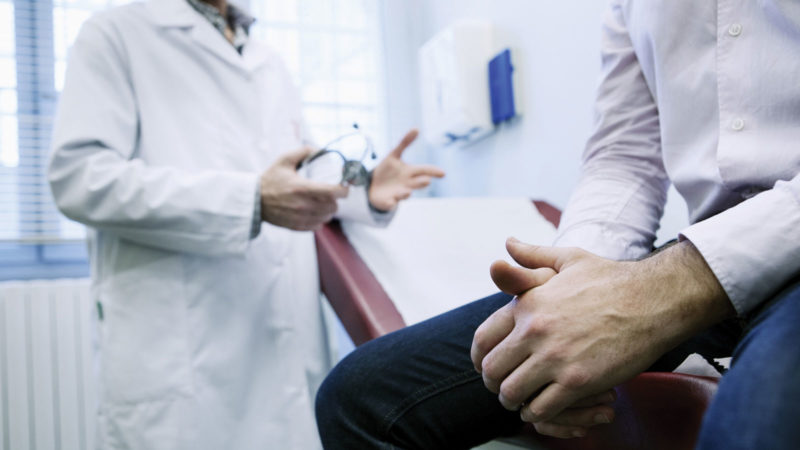 While you might not hear about it on the news as often as other diseases, prostate cancer is the most common non-skin cancer in America, affecting one in seven men, according to the Prostate Cancer Foundation.

This year the Surveillance, Epidemiology, and End Results (SEER) Program of the National Cancer Institute estimates there will be 180,890 new cases of prostate cancer in the U.S., representing 10.7 percent of all new cancer cases.

Starting in 1993, men were urged to get a prostate-specific antigen (PSA) blood test around the age of 50; but approximately six years ago, the U.S. Preventative Task Force recommended that men shouldn’t be screened for prostate cancer because of the uncertainties of the test and the risks associated with treatments. That recommendation has caused confusion as to the best course of action.

“PSA screening is somewhat controversial at this point, and many organizations have different recommendations regarding treatment,” says Dr. Lance J. Hampton, chief of the division of urology at VCU Health. “The most conservative recommendation would be for all men to start screening at age 50 – or age 40 for African-American men or anyone with a family history of prostate cancer.”

The American Cancer Society suggests that men talk with their health-care provider in order to make an informed decision about whether to be screened for prostate cancer after hearing the pros and cons.

“The whole point of PSA testing is to identify men who have prostate cancer at a very early stage in the disease, many years before symptoms would cause them harm,” says Dr. Kinloch Nelson of Virginia Urology. “Many of the cancers that PSA detects are not destined to harm the patient and the best treatment is observation. If used properly, PSA will typically detect cancer that would cause symptoms 10 to 15 years down the road.”

PSA testing does save lives. “If you look back to the death rate from prostate cancer in American men in 1989 or 1990 and compare it to 2010 with PSA testing, it was cut nearly in half,” Nelson says. “We have been able to make a tremendous impact, but it’s come at a high cost.”

Men need to get a digital rectal exam where the doctor can feel the prostate even if they decide they don’t want to go ahead with PSA testing. “It’s an important part of the process,” Nelson says.

Because men aren’t being screened “as closely as before, we are finding some cases that are more advanced,” says Dr. Thomas Eichler, radiation oncologist with Thomas Johns Cancer Center at Johnston-Willis Hospital.

The real revolution in prostate cancer treatment “is the widespread adoption of active surveillance or observation,” Nelson says, noting that the alternative would be an invasive treatment such as surgery or radiation therapy. “You keep your eye on the patient and the cancer. You actively monitor and intervene when it becomes more aggressive.”

Doctors look at both the PSA scores and the Gleason score (the grade of the cancer) to see whether observation is a good option. In the last five years, the number of patients choosing active surveillance is estimated to have increased from 10 percent to about 25 percent.

If someone is diagnosed with prostate cancer, the five- to 15-year cure rate is 95-plus percent. “The treatments are very good,” says Eichler, noting they range from surgery to modern techniques of radiation therapy.

Men need to be aware of the risks associated with surgery or radiation. The two most common risks are urine control and erectile dysfunction. “With surgery almost everyone has problems during the initial recovery phase but virtually everybody improves as the months go by,” says Nelson.

After a year, most men see improvement with urine control but recovering from sexual dysfunction can take much longer. “Overall the numbers are not as good,” he adds. “The rate of recovery for erectile dysfunction is variable.”

“There are more options today than ever,” Eichler notes. “You need to talk to your urologist about surgery and also talk to a radiation oncologist about radiation therapy before you decide on treatment.”

The American Cancer Society (ACS) recommends that the discussion about screening should take place at:

Because prostate cancer often grows slowly, men without symptoms of prostate cancer who do not have a 10-year life expectancy should not be offered testing since they are not likely to benefit.