How music royalty made an appearance without being seen or heard 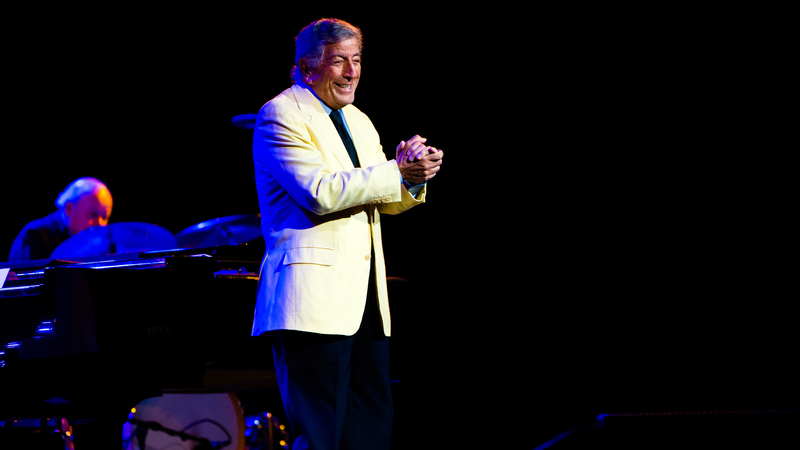 In the Season Four finale of Amazon’s “The Marvelous Mrs. Maisel,” Tony Bennett managed to be arguably the episode’s biggest star without having to show his face or sing a note.

The episode – “How Do You Get to Carnegie Hall?,” written and directed by the streaming comedy’s creator, Amy Sherman-Palladino – took place immediately before and after famously risqué comedian Lenny Bruce (played by Luke Kirby) performed his historic Feb. 2, 1961 gig at Carnegie Hall, with the show’s title character and Bruce having a conversation that wraps around Bennett, portrayed as the epitome of class and the pinnacle of what an artist should be.

The star’s son and longtime manager, Danny Bennett, says that no one in the production came to him to ask any permissions, and only used Tony’s likeness on a newspaper ad relating to the gig at the Copa. “That show’s so great, I didn’t care,” the younger Bennett says. “I love the fact that they didn’t use any music – pretty incredible – to evoke Tony.”

He adds, “I was a little upset with Legacy (the division of Sony Music that works Tony Bennett’s catalog) for not going after the show, which would’ve been obvious. But it’s not the first time there were opportunities that weren’t tended to.”

Not that the Bennett family has always approved all requests that have come in. Danny Bennett gives up the fun example of how David Chase, the creator-writer behind “The Sopranos,” desperately wanted his fathers’s music for the crime series. “But Tony, the mob thing, he just didn’t dig it,” says Danny. “It wasn’t his thing. But in the last episode, where you don’t know if Tony Soprano got killed or not when he goes to play Journey’s ‘Don’t Stop Believing,’ look right under it. The song is Tony’s ‘Rags to Riches.’ The next time I saw David Chase after that run, he said that he had to do it. That’s cool.”

And now, back to the show

In the “Marvelous Mrs. Maisel” season finale, the Lenny Bruce character says: “I got a call from Tony Bennett’s people. He’s doing five sold-out nights at the Copa, and they wanted me to open for him. Which is a dream gig, because in addition to him being one of the nicest men in the world, his craft service table is not to be believed.”

With Bruce already busy with his Carnegie Hall debut, the controversial stand-up recommends Miriam “Midge” Maisel (Rachel Brosnahan) to Bennett’s managers for the Copa opening gig. This would be a break for Mrs. Maisel, currently working in a burlesque house – comic purgatory – due to her own raunchy sense of humor. It’s her uncompromising sensibility that leads her to her own golden rule: No opening slots; not doing things she doesn’t want to do. So she turns down her biggest shot, opening for Bennett, to maintain what she believes are her principles. But Bruce brings Maisel onto the Carnegie Hall stage, after his big show, and confronts her about her decision. “Ninety percent of this game is how they see you,” says Bruce to Maisel. “They see you hanging with Tony Bennett, they think you deserve to be there.”

And back to Tony Bennett

Danny Bennett talks about his father and Frank Sinatra as the only “crooners” who continue to hold that kind of iconography.

“I’ve always regarded Sinatra and Tony like the Beatles and the Rolling Stones,” he says. “Tony was known for sticking to his guns and never compromising. Even at 95, he hasn’t changed one iota since that time. He’s just gotten better.”

Connecting his father’s stick-to-it-ive-ness to the chutzpah and success of “Mrs. Maisel,” Bennett believes that both traffic in the American dream. “It’s about sticking to your passion and not going for the easy buck. The whole show is about that. Midge has her religious beliefs, but she has a passion – her raunchy comedy – that drives her. That was Tony’s story. He only did what he wanted to do.”

And when Tony was put into a position opposite his heartfelt passion, he bristled and balked. Like when Bennett wanted to sing jazz, and Mitch Miller, the white-bread chieftain of Columbia Records, would rarely relent.

“Mitch called me several months before he died, around my dad’s 90th birthday,” starts Danny. “He’s deaf as a doorknob, screaming, ‘Hey, it’s Mitch.’ He talked about how they fought constantly because ‘all he ever said was “jazz-jazz-jazz.” But look at him now. Jazz saved his career. He’s made a success out of what he’s always wanted to do. Tell Tony I was wrong.” I go to my dad’s apartment, and he’s in his studio, painting – I don’t like to distract him – so I’m talking while he’s making brush strokes, and I tell him what Mitch said, that he was wrong. Tony doesn’t stop painting. Doesn’t even look up, and says, ‘Well, I know that.’”

Don’t sin against your talent

Then there is Tony Bennett’s deeply friendly connection to the real-life Bruce, the controversial comedian with whom he shared a manager, the legendary Jack Rollins.

It was Rollins, the one-time manager of Woody Allen, Joan Rivers, and Robin Williams, who once told Bennett, after Lenny’s death, that Bruce had “sinned against his talent.” This quote stuck with the singer and inspired Tony to give up bad habits and focus instead on his artistry. “Look, I remember the day Nat King Cole died, my dad – who used to smoke L&M cigarettes – crushed that pack, and never looked back. … Tony lost so many friends to drugs, to bad habits, to the battles between art and commerce. I know he wanted to have the chance to pass that advice to Amy Winehouse. He gave Amy her album of the year Grammy award, and she was thrilled, but she passed away before he could connect with her on that point. When they were planning to duet, he wanted to sit her down and tell her about Bill Evans and Lenny Bruce, and how to sin against her talent was wrong. Tony was deeply saddened that he didn’t get that chance to talk to Amy before she passed.”

Going back to his father’s relationship with the real-life Lenny Bruce, Danny chuckles.

“Lenny died for our sins, right?” says Danny Bennett. “Tony and Lenny were good friends. They all hung out with Annie Ross, running around town. Tony was about jazz. Like my dad, Lenny was uncompromising. A new appreciation for Lenny would be welcome these days, understanding the politics of who we are now and all elements of free speech. What’s funny though is that, in that episode, it’s the guy who is the least compromising who’s trying to get Midge to compromise.”

Danny Bennett goes on to say that it was singer and bandleader Louis Prima who clued Tony in on the joys of doing things his way or the highway.

“Whether it was sawdust joints or classical halls, ‘go hard after top billing’ is what Louis told my dad. Tony listened and stuck to that. The only time he didn’t is when he celebrated his 20th anniversary in showbiz on a tour with Duke Ellington and insisted Ellington got top billing. Same with Count Basie. Tony was the obvious draw, but he was adamant their names went before his.”

Bennett famously said that “if you don’t take risks you are relegated to a life of mediocrity.” In his 2016 memoir, “Just Getting Started,” Tony wrote, “The only time I had ever done that before [the Ellington show] was with Count Basie and Frank Sinatra. I have no problem playing second bill to royalty – Duke, the Count, or the Chairman of the Board. They have elevated me in every way.”

Going forward with Tony Bennett’s recorded legacy and working the catalog for the future, Danny Bennett says there is a world of things to come – including further exploration of Tony’s streaming story, sales of Tony’s artwork, an explosion of merchandise with his name and likeness and a biopic with a twist – all with the same uncompromising spirit of the Tony Bennett from 50 years ago.

“Tony never wanted to get distracted by branding,” says Danny Bennett. “But done in a proper, tasteful fashion, these things keep the legacy alive. We don’t have to try to make Tony relevant. He’s always relevant. We just have to keep the education flowing.”

As to what the possible benefits there are from a lifetime of not compromising, Danny Bennett asks, “Who at 95-and-a-half gets nominated for six Grammys, including album of the year for last year’s ‘Love for Sale,’” says the son, pointing at an April 3 date with music’s top honors and dad’s duet partner Lady Gaga.

And how is Tony Bennett doing after retiring from the stage in 2021 following the diagnosis of Alzheimer’s disease? After 41 years of Danny Bennett having worked with his father as his manager, every day is an adventure, even if Tony isn’t doing live concerts.

“Look, very early on, he stopped smoking, stopped experimenting with drugs and that kind of thing, cleaned up, and got himself together. From there, he stayed healthy, took care of himself, played tennis, worked out. And now, he does his scales every day. You know, he still rehearses, three times a week, the whole show with his music director. That’s how you do it. It’s like ‘How do you get to Carnegie Hall, right? Practice.’”