Home » From Our Readers » A childhood episode seared into memory

A childhood episode seared into memory 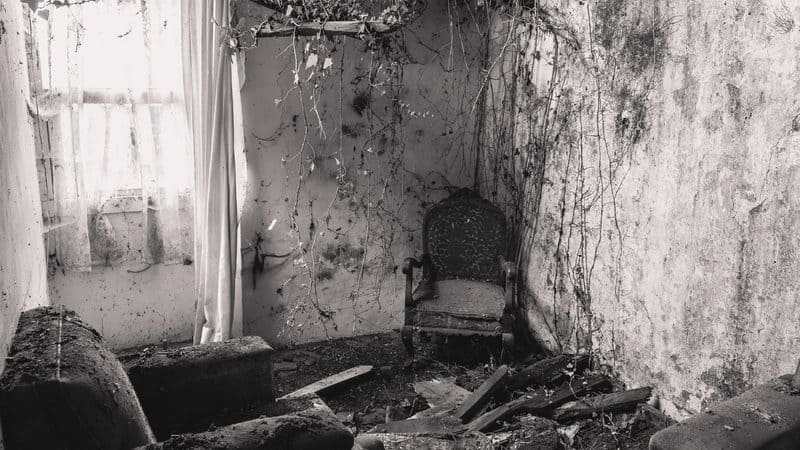 There was an ancient house in my childhood neighborhood that stood abandoned for years. It was a weathered green asbestos-sided mess covered in vines and weeds up to its broken and filthy windows. Trash and newspapers from long ago mounded up from the tattered front screen porch, through the dilapidated inside, and out the tiny back porch. It was different than most of the houses in our tired, poor area of town in that it was bigger and more decrepit to the point of appearing haunted.

One day, a long-forgotten member of the home’s original owner showed up. It was rumored that the old man had been released from a psychiatric hospital or mental health center of some kind.

Ennis Carr’s swollen lip hung off to one side and impaired the few words he struggled to utter. His face looked like it hadn’t been washed in years, and the several layers of his torn and dirty clothing were literally all he had in this world. He would wander the nights looking for junk to pick up and carry home. To this eight-year-old boy, he truly looked like a ghost or specter from some scary movie I had sneaked in to watch.

He had obviously had a stroke, or a mental collapse of some kind, and he frightened us kids in the neighborhood. And what do young folks, especially naïve, unsophisticated children do when they don’t understand something? I suppose they either run from it or make fun of it.

I was dreadfully fearful of the scary old man. So, when he’d come around with a nasty old pot to get some water from our outside faucet, I’d duck behind Momma. She would say, “Sure, Ennis, get you some water and here’s some biscuits you can carry home with you.”

I’d watch as he’d stagger on back across the street and drag his broken body up the moss-covered steps and into the condemned house.

I was the youngest of all the kids in the hood, but that was no excuse for what we kids did next.

It happened to be election season during that particular year, and everywhere we went there were political signs, Vote for Me! Re-elect the Next Guy.

So we kids decided we would get into the act. We would start an election campaign and, you guessed it, Ennis Carr would be our candidate!

We made signs and carried them around the neighborhood chanting, “Vote for It! (boom, boom), Vote for It!”

I think back on that now and it hurts my heart that kids can be that cruel. Imagine if Ennis Carr was cognizant enough to realize we were referring to him. He probably did realize this.

I can almost picture his dirty, eternally sad face peering through the filthy, broken glass windows of the old house seeing us march around the block mocking him for simply being different and diseased. If you can recall the famous Emmett Kelly the clown, without the face paint, you can envision Ennis’ appearance.

Other than occasional raindrops, I’m sure the tears we caused were the only moisture that ever touched his dried-out face.

Our parents finally made us stop our campaign to elect “It” and the signs were discarded. That errant episode of my life faded into memory until a few dirty pots of spigot-water, left-over biscuits and midnight ghost-walks later …

You can’t take it back

It was a cold winter’s night and way later in the night than any of us children were ever awake when I saw some yellow flashes through the shades and thin drapes on my brother-shared bedroom window. We looked out and saw blazes that would be burned in my eyes forever.

Ennis Carr’s house was engulfed in flames and destined to be burned to the ground. All the fire-and-brimstone sermons I had survived in our tiny, 20-member church flashed by like the blazes. Half-smoked and re-lit cigarettes the old man picked up had caught his house afire and the piles of hoarded clutter had gone up like a tinderbox.

It burned for hours as the firemen poured water through the blackened and broken windows, charred doors, and crispy roof timbers. They finally used their axes to break into the house. What we saw was a body bag being brought out of the scorched and steaming ruins and into the cold, wet street. The canvas encasing Ennis’ scalded and scorched corpse seemed to lie there for hours while we watched with eyes of fear and terror.

Momma let us sit up in the living room instead of sending us back to bed right away; she knew we wouldn’t sleep.

The faces of disfigurement

I learned quite a lesson at that early age, even though I don’t think I was intelligent enough to continually apply that lesson as my life progressed.

I realize now that each and every one of us are disfigured, whether visibly or hidden, in ways others will never understand; some are castigated and abused simply for being different in color, size, or personal preference. Some because of their knowledge or education level, though we are all ignorant, just in different subjects. All of us can learn through our mistakes and victories.

I hope I have learned enough to be compassionate for the Ennis Carrs of this fragile, blemished world. I hope the folks that meet me are gentle in their judgment of my many imperfections.

Michael W. Updike is a singer, songwriter, and author. He lives in a 1930s Virginia plantation-country farmhouse, which he renovated. Michael also collects and restores antique cars. He enjoys spending time with the love of his life, Jennifer, and their family.