The Roots of Ed Asner’s Humanity

Of Midwest stockyards and diverse neighbors 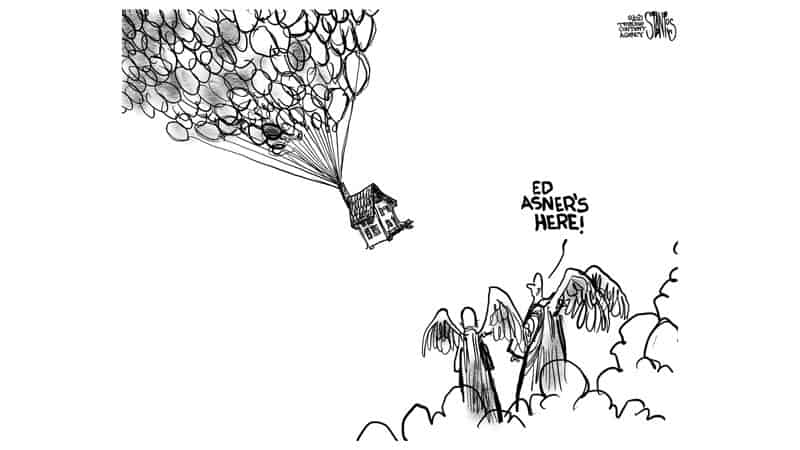 Columnist Mary Sanchez shares a personal tribute to Ed Asner, to their shared Kansas City roots, and to his embrace of diversity and support for the voiceless.

And packing house workers, Depression era people who’d emerge onto dusty streets, their white work coats splattered with the blood of the animals they labored over.

My paternal grandmother could well have been one of the workers the future actor watched.

The Asners lived in the stockyards of Kansas City, Kansas, across the street from the Armour Packing Co., one of several slaughterhouses operating then in the West Bottoms. It’s where my abuela worked during those same years, as a single immigrant woman raising my father.

Asner died recently (Aug. 29, 2021), regaled for his long, award-winning acting career, but especially for his role as Lou Grant, first on the “Mary Tyler Moore Show,” then in the drama series by that character’s name.

Extending attention, as his life deserves

The measure of a life that spanned 91 years ought to last longer than our current news cycles.

I’ve watched and read the coverage. Much of it merely nods to Asner’s Midwestern beginnings, clauses in sentences mostly, not explanations.

Know that when Asner spoke of Kansas City, he wasn’t referring to the Missouri city, but its too often less-lauded Kansas sibling.

And if you delve into his 2019 autobiography, “Son of a Junkman: My Life from the West Bottoms of Kansas City to the Bright Lights of Hollywood,” it’s clear that many of the pinnacle life lessons that shaped his soul began here.

To me, it’s not the journalism portrayed in “Lou Grant” that marks his importance. Nor is it his incredible performances in the television miniseries of “Roots” or “Rich Man Poor Man,” both of which I loved as a young girl, or the endearing Pixar film “Up.”

Look to his earliest memories for the seeds of the political and social activism that would later derail his career for two decades. Asner’s awareness of bigotry and willingness to not only stand up for the voiceless, but to do so at great personal cost, those impetuses were planted early.

Asner’s religious training, studying Hebrew and having a grandfather who was a Yiddish scholar, were deeply impactful. The term “mensch” was wisely included in several of the recent tributes.

Start with that junkyard, his father’s work. He wasn’t the proprietor of a landfill, but rather the steward of business that found value where others didn’t.

Both of Asner’s parents were immigrants, his mother from Russia and his father from Lithuania.

His two best buddies when the Asners lived near the stockyards, they were both Mexicans.

He writes of when the family later moved to an area that Asner dubbed “white bread village.” It was a better neighborhood, with far nicer homes, but what he noted was the lack of people of color. The packing house district was much more diverse.

“There was not a single minority to be found,” he wrote. “Being Jewish, I felt like an outsider from the other side. I felt like I didn’t belong. This feeling followed me throughout my life.”

That’s a deeply personal admission. And a clue to the foundation of his empathy.

He had a lotta spunk

Despite his early successes, Asner had two decades – the 1980s and 1990s – of sparse work after he crossed studio execs and became virtually blacklisted as an actor.

The offense? He stood up for El Salvadorans who were fighting a Civil War. The U.S. backed the government.

Asner was sparked to activism when a nun showed him a documentary of the death squads and schooled him that our military was training some of the people doing the killing of innocents. The assassination of Archbishop Oscar Romero is probably the most widely known of the outrages.

Asner was branded a Communist. He was the SAG (Screen Actors Guild) president, a very public and prominent role.

And he was deeply pro-union, having worked for a time as a Kansas City auto plant.

Today, Kansas City, Kansas, is the most racially and ethnically diverse portion of the Greater Kansas City area. The Asner’s brick house is still there, the neighborhood now a part of the multiculturalism.

Asner Iron & Metal Co., the now modernized “junkyard,” is still operating in the same location as its original founding in 1903. It’s believed to be the region’s oldest Jewish-owned business. Asner’s niece owns it.

In recent days, Ed Asner’s family has gently nudged back at some of the recent descriptions of their patriarch’s life. They posted on his Twitter account, noting that although he embraced the term socialist, he preferred “humanist.”

Yes, that fits. A great humanist has left us. But what an example he left, from Kansas City, Kansas, to the world.