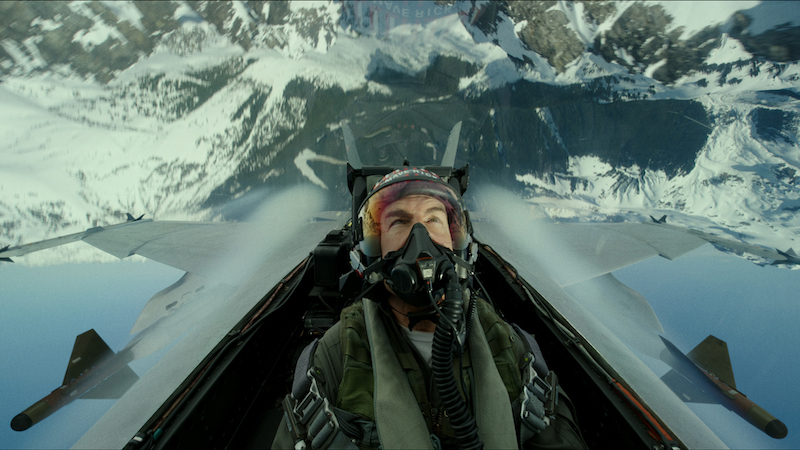 Having access to the Navy expertise and acquiring real planes for Top Gun: Maverick was essential for production designer Jeremy Hindle.

It is widely known that Tom Cruise would rather jump off a building or out of an airplane than resort to using CGI. Thus, when it came to filming Top Gun: Maverick, having access to the Navy equipment and expertise that informed the original 1986 hit was paramount for production designer Jeremy Hindle to create a believable, engaging action film.

From an opening sequence aboard the flight deck of a USS aircraft carrier to an F-14 Tomcat plane, or a fleet of fighters, Hindle pulled out all the stops.

The film brings back Cruise as Pete “Maverick” Mitchell – now a weathered test pilot. He has returned to the San Diego base in the original movie, this time to train a group of naval graduates for a very dangerous mission. The F-14 Tomcat was featured in the first film, and with the sequel hitting a lot of nostalgic notes, it was fitting for the plane to make an encore in a climactic dogfight sequence. But there was a catch, as Hindle explains: “There are no F-14s that fly because they [have been decommissioned in the U.S.] and all the engines have been taken out of them.”

Behind the scenes in acquiring real planes for ‘Top Gun: Maverick’

Getting access to even one was quite an undertaking. “The only people that have F-14s are in Iran, and they have six of them,” says Hindle. But he wasn’t going to get any of those.

In the end, the filmmakers found one they could use at the San Diego Air and Space Museum, but it had to be dismantled and shipped, since the scenes with the plane were shooting at an airfield more than 500 miles away, near Lake Tahoe.

The next challenge was to make the aircraft as fully functional as possible. “It needed to be operational enough that the [cockpit] canopy opens,” Hindle says. After that, since it still lacked an engine, it was towed. “Everything up to that point is as real as you can get,” he adds.

Hindle credits the Navy crew assigned to the film for aiding to secure the F-14. “They would do anything to help make the movie amazing,” he says. For the other planes used by Lt. Bradley “Rooster” Bradshaw (Miles Teller), Jake “Hangman” Seresin (Glen Powell) and other members of the cast, Hindle brought in 20 other aircraft, also not an easy feat. “We collected those from all over the country because these were planes that are working, flying and still doing their jobs,” Hindle says.

Once he had the planes – including a Boeing F/A-18/F – call signs needed to be painted on them and the actors’ headgear. Hindle worked with director Joseph Kosinski, a graphic artist and an illustrator, to design the character helmets. “There’s so much story to each helmet,” Hindle say. “Hangman’s has a tiny hangman graphic, and Rooster has his design.” Everything has to register instantly, because the audience has “this second [on screen] to know who they are.” Hindle reveals that call signs on helmets did not exist in the Navy until after the first movie was made. “It was Tony’s [Scott] idea on the first movie, and now everyone does it,” he says.

Like military planes, trains, autos, and boats? Check out these transportation museums

There was one plane, though, that Hindle didn’t have to worry about procuring – the one Maverick is working on in a hangar early in the film begins. That was Cruise’s own P-51 fighter jet, Hindle explains. “He flew that from Florida to California to that hangar.”

As for the film’s bar, Hindle explains that all Navy bases have I-Bars where officers come and hang out. If they’re stationed there, they will bring a mug which is then hung on a hook, explains Hindle of the decorating choice.

The idea behind it was the bar belonged to Penny (Jennifer Connelly), but she had inherited it. Says Hindle, “It’s this old bar. Everything in the Nacy has this old feel to it, you feel their history because they pass everything on. They don’t tear it down and build on it, and that’s how we wanted this bar to look.”

The bar was a real set build on the beach. “I scoured bars all along the beach in San Diego, but nothing worked,” says Hindle. “We actually built it in L.A., completely made of steel, and dressed it so I could see it, but then we dismantled it and rebuilt it on the beach.”

The set dressing, Hindle says, is real “from the tail wings to the plaques on the walls.”