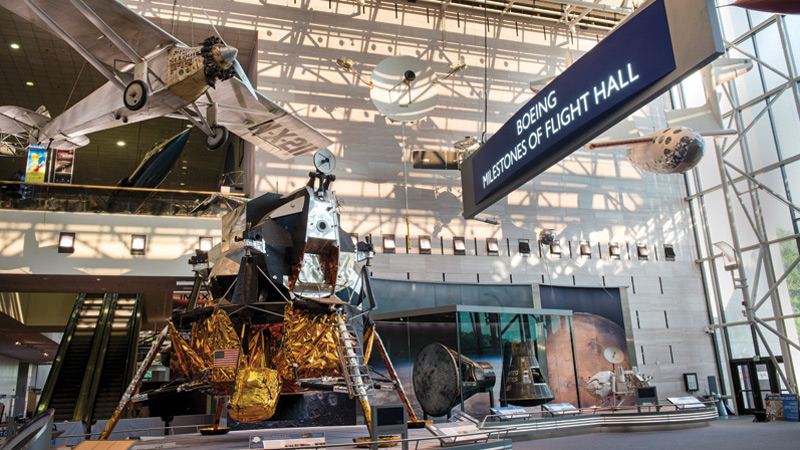 See the evolution of flight for yourself at the Smithsonian Air & Space Museum, with locations in Washington, D.C., and Chantilly, Virginia. In D.C., launch into the history of flight and examine massive spacecraft hanging from the ceiling. At the Chantilly location, the thousands of aircraft on display include the Space Shuttle Discovery.

Observe 100 years of aviation achievements at the Virginia Air & Space Center in Hampton. Step into a full-size passenger jet and experience the world of commercial flight. Explore the early years of America’s space program and step into the shoes of an astronaut. Take a closer look at artifacts and models such as the Orion PA1 flight test vehicle, which was built at nearby Langley Space Center.

Aviation history took off full tilt with two innovative individuals. At the Wright Brothers Memorial in Kitty Hawk, North Carolina, you’ll learn about Wilbur and Orville’s first flight there among the dunes, where four years of scientific experimentation paid off as their airplane achieved 12 seconds of airtime on Dec. 17, 1903. These two brothers changed the world forever with their invention. (The visitor center is undergoing renovations, so not all exhibits are available.)

Massive battleships and aircraft carriers, helicopters, tanks, jets, submarines – these vehicles and others are crucial in carrying military supplies and the men and women who put their lives on the line for their country during combat and peacetime. At these museums, experience a new appreciation for those who serve.

In Newport News, make tracks to the U.S. Army Transportation Museum to see a collection of about 100 vehicles, from planes and helicopters to tugboats and hovercrafts, spanning the Continental Army in 1775 to present day. Highlights include the only surviving gun truck from the Vietnam War and the only surviving hovercraft used during combat in Vietnam. Transportation.army.mil > click Museum on left navigation bar.

A lesser-known Virginia gem houses the world’s largest private collection of World War I and II military aircraft. At the Military Aviation Museum in Pungo, you can get up close and personal with roughly 50 airplanes and military vehicles spread out among four hangars and a museum space. Learn about the aircraft and their stories from knowledgeable volunteers and exhibit cards. Most of the planes have been restored to be airworthy and are even flown by trained pilots on special occasions.

Go deep into the belly of the Navy’s last battleship, the 887-foot-long Battleship Wisconsin at Nauticus in downtown Norfolk. The massive ship served during World War II and the Korean War and was commissioned as part of President Ronald Reagan’s 600-ship Navy. Join a guided tour or go on a self-guided walkabout around the deck, then step into the ship’s interior to examine command-and-control rooms, engine room, galley and more. Then imagine living on board for months at a time!

Explore more than 500 years of international tank and cavalry history at the American Armoured Foundation and Tank Museum in Danville. The collection includes more than 120 tanks and artillery pieces, 150 machine guns and other military weapons, headgear, uniforms and more. (Since the museum doesn’t have heat or air conditioning, you can better imagine the life of the soldier!)

Jump aboard, matey! Travel uncharted seas or well-traveled waters on steamboats, sailboats, tugboats and naval ships. Virginia’s site along the Atlantic Ocean, with active tributaries and the majestic Chesapeake Bay, has created essential maritime cultures, proudly showcased in museums large and small in Hampton Roads and the Bay country.

Explore nearly 150 boats from 42 countries; sail through the history of the Polynesian navigators; attend special educational events; immerse yourself in 3-D iMax movies; and more – all at Mariners’ Museum and Park in Newport News. Then dive deep into more than 200 tons of artifacts and a full-scale replica of the Civil War ironclad fighting vessel, the USS Monitor. MarinersMuseum.org and MonitorCenter.org

Docked at the Reedville Fishermen’s Museum on the western shore of the Chesapeake Bay in Virginia floats a historic fishing fleet. Step aboard to learn about the history of the boats that navigated the Chesapeake Bay. Examine a replica of the Spirit of 1608, the barge John Smith used during his Chesapeake Bay exploration.

About 30 minutes away on Virginia’s Northern Neck, Chesapeake Bay steamers provided a lifeline for transportation and commerce to isolated rural communities. Watch those days come to life with artifacts, photos and models at the Steamboat Era Museum in Irvington. (Reopens for the season in April.)

Explore the boat-building capital of the Chesapeake at the Deltaville Maritime Museum at the tip of Virginia’s Middle Peninsula. Have the chance to physically step onto boats from the 1900s and imagine what it was like to be a part of the history.

Railroads may have lost some of their steam to air transportation, but they still attract passionate followers, inspired by the power of the locomotives, the rhythmic pounding on the tracks, the nearby rumble along the rails and the vision of travel.

Early growth in Roanoke (initially called Big Lick) sprang from the junction of the Shenandoah Valley Railroad and Norfolk & Western Railway. In honor of this heritage, Roanoke hosts the Virginia Museum of Transportation, showcasing a rail yard with more than 50 pieces of rolling stock, including the largest collection of diesel locomotives in the South; a four-tier O gauge model train layout; a re-created depot; an exhibition on African-Americans in railroad history; and more. The museum also includes modest informational exhibits on automobile, bus and air travel.

Combining the majesty of the steam engine and the inspired mind of an artist, Roanoke’s O. Winston Link Museum at the History Museum of Western Virginia chronicles a massive photography project of the late ’50s that captured the final years of steam locomotives on the N&W. The museum houses the largest collection of Link’s images as well as fascinating insight into his photography methods.

Deep in Southwest Virginia, the Raymond F. Ratcliffe Memorial Transportation Museum in Pulaski focuses on small-town history as a rail town and crossroads. The highlight is a detailed O gauge diorama, a scale replica of the town circa 1955.

If you’re in Norfolk, visit the Norfolk Southern Museum to see a 900-pound railroad coupler, a locomotive simulator and numerous artifacts. NSCorp.com > click Get to Know NS > NS Museum

Farther afield, the Baltimore & Ohio Railroad Museum in Baltimore showcases an impressive roster of 19th- and 20th-century railroad equipment. The 40-acre historic site includes the 1851 station, an 1884 roundhouse and the first mile of commercial railroad track in America.

They may not carry you across the country, but tractors and trucks prove essential for farm operations – and stir up enthusiasm in children and grown-ups alike! Just off Interstate 95 in Colonial Heights, Keystone Truck & Tractor Museum showcases antique tractors, trucks and farming collectibles in a 70,000-plus-square-foot museum. Sibley’s barbecue restaurant and a farm-themed gift shop enhance the experience.

Notable transportation museums in the U.S.