Birding in a Pandemic

A chance to observe our backyard birds’ behaviors 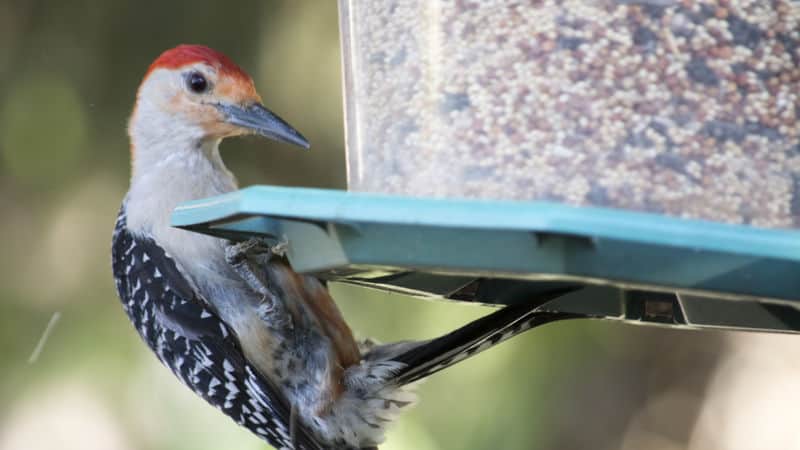 Flyways & Byways columnist Jerry Uhlman reflects on the birds he was able to observe in his own backyard, in lieu of this year’s birding travel plans. Birding in a pandemic brings opportunities and lessons in life.

What a strange and surreal time we’re living through – and it may be far from over. Yet, in nature’s realm life goes on, seemingly with little awareness of the angst that we humans experience in our daily lives.

While illness has been an overarching concern, the ripple effect of the pandemic’s disruption seeped into the many corners of day-to-day events. My travel plans for a trip to the Midwest during spring migration were scrapped. For many of us, finding alternatives closer to home became a reality.

While some birders continued to roam byways, many confined their birdwatching to brief morning sorties to neighborhood parks well before the arrival of joggers and dog walkers. Others chose to hunker down in their own backyards, content to witness spring’s arrival close to home, and perhaps to rediscover overlooked pleasures.

For stay-at-home birders, the importance of well-stocked feeders and a water drip became crucial to attracting more species and increasing birdlife activity. Suet and sunflower seeds became hot items for most species.

This was a spring and summer during which I paid much closer attention to the similarities and differences among various species as they crossed paths in the backyard. Claiming one’s territory, building and defending a nesting site, and feeding in close proximity were activities that created challenges.

Avoiding Richmond’s heat and humidity during late spring and summer, I stood guard early mornings and evenings, when birdlife would be most active. In-demand feeders and sought-after birdbaths presented plenty of opportunities to observe an array of behaviors: boldness and timidity, bullying and pitched battles, as well as gentler signs of tolerance and accommodation.

The most pugnacious species were European starlings and common grackles, glaring at other feeder birds and threatening havoc if any dared to interrupt their noisy feeding. They, however, fed side by side together without squabbling much. Smaller birds quickly learned to avoid both species. Next in the hierarchy of feistiness were house sparrows, which, despite their small size, terrorized all but the largest birds in the backyard. Red-bellied woodpeckers, too, sent most other species fleeing when they approached feeders. In general, larger species displaced smaller ones, sometimes with threats and intimidation and other times simply by their sheer size.

The most polite and genteel species were chickadees, titmice, hummingbirds, catbirds and thrashers. The smallest birds relied on quickness and an acute sense of timing; it adroitly darts to the feeders and suet when bullies briefly were away.

On my watch, there were disappointments as well as unexpected delights. For the first time in many years, no house wren blessed our backyard. This welcome visitor often took up residency in a nestbox next to the patio; it gives us joyful rambling songs and exuberant nest-building behavior each spring. Sadly, not one dropped by this year.

Instead, Carolina chickadees settled into the nestbox and raised three chicks just a few feet from the feeders. Within about two weeks, the chicks fledged, tumbling out of the nestbox; in rapid-fire, flying off in different directions, their startled parents called in vain to corral them. And the fledglings quickly disappeared from sight.

In early summer, suet was the food of choice for gray catbirds and brown thrashers, whose chicks settled under the suet cage, mouths agape, waiting for parents to fill their hungry gullets. Too soon these fledglings vanished as well.

Later in this surreal and bittersweet summer, our restlessness swelled and we longed for a road trip or a food or music festival. Then, right on schedule, goldfinches swarmed to coneflowers and black-eyed susans in the backyard, a balm that heralds their late summer nesting. Nature’s realm benignly follows ancient seasonal rhythms, seemingly indifferent to human vicissitudes. Our backyards bring not only joy and solace, but also grant us a reassuring safe haven during times of uncertainty and anxiety.

Jerry Uhlman has been writing about birding and travel for 20 years, including his Flyways &amp; Byways column in the Richmond Times-Dispatch and his book, A Birder’s Guide to Metropolitan Richmond. When he’s not birding in a pandemic, he travels and adds birds to his life list. Flyways@Verizon.net