Get Your Fix with a Local Mix 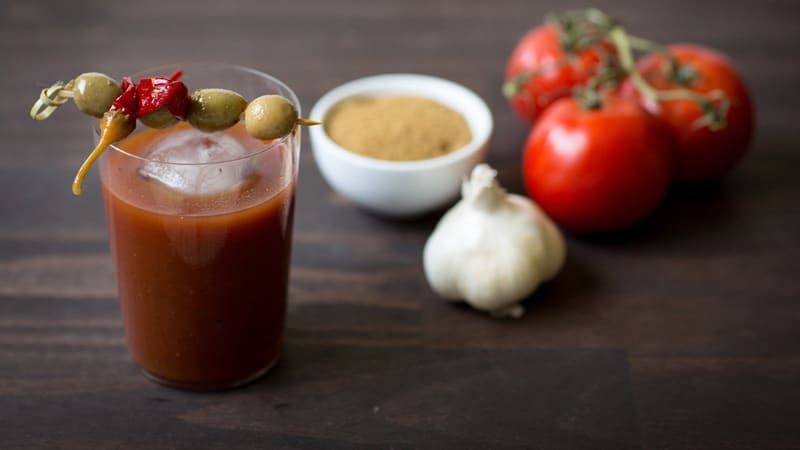 The origin and name of the tomato-juice-and-vodka cocktail remain shrouded in mystery. The earliest creation claim arose in the 1920s from Harry’s New York Bar, a Paris hangout for Ernest Hemingway and other American expats. U.S. creation claims begin post Prohibition with New York’s 21 Club.

The inspiration for the name could be Queen Mary I of England, who earned that sobriquet from the slew of religious executions she ordered, or other female inspirations. Another tale promotes the name as a mispronunciation of Vladimir, because Vladimir Smirnov (yes, of Smirnoff vodka fame) hung out at the bar that claims the origin story.

Because of its hair-of-the-dog reputation, a Bloody Mary pops up on many a breakfast and brunch menu. (The hearty tomato base and addition of salt supposedly combat a hangover, though nothing helps like temporary abstinence.)

With so many potential ingredients making the perfect Bloody Mary, a quality mix promises all the enjoyment without all the fuss. Fortunately, Richmonders can pick up Virginia mixes (also tasty in virgin format). For the perfect local concoction, mix with a Richmond spirit, such as Cirrus Vodka or James River Distillery Øster Vit (plays nicely with Crabby Mary mix).

• Richmond’s spicy Texas Beach is as saucy as its namesake on the banks of the James River. A rich, robust tomato base fairly bursts with complex flavors and warming spices. Available at many area markets and bars. TexasBeachBloodyMary.com
• Sassy, Crabby, Clammy and Porky Mary mixes from Ashburn Sauce Co. in Virginia Beach add the essences of garlic and cayenne, seafood and bacon. Available at Virginia ABC stores. AshburnSauce.com
• The marketing material for Henrico-made Patrick Henry mix says it best: “In the tradition of the fiery orator who made his home in Hanover County … comes forth a Bloody Mary mix that is to die for. One taste of this bold elixir and you too [will] join the revolution.” Available at Virginia ABC stores. PatrickHenrys.com
• Virginia’s Eastern Shore naturally produces Blue Crab Bay Sting Ray with clam juice and Chesapeake Bay seasoning. Available at Virginia ABC stores. BlueCrabBay.com
• T.C. Trotter’s Moose Mix was born in T.C. Trotter’s Restaurant and Bar in Lynchburg more than 30 years ago. The restaurant has passed, but the bold and spicy mix is available at Virginia ABC stores. TCTrotters.com
• The mild, slightly sweet Huntsman, based on an old family recipe, was served at foxhunts before the Goochland couple went commercial. Available at miscellaneous markets and online. HuntsmanPremiumBloodyMaryMix.com
• Reflecting its birthplace in Mathews County near the Chesapeake Bay, Bloodys by Buz cries “shrimp cocktail,” with clam juice and spices that complement seafood. Available at select markets. BloodysByBuz.com