All small towns have secrets – and North, Florida is no exception 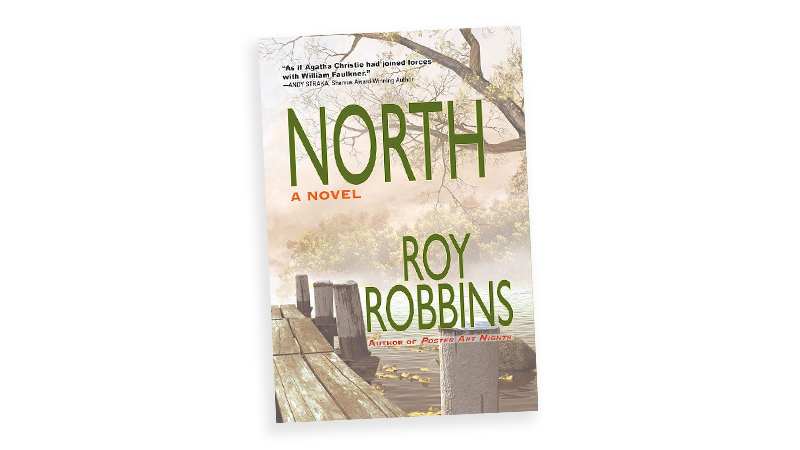 As we come out of the beach reads and brain candy books of summertime, fall tends to bring the desire for cozier, more thoughtful types of genres. If you too seek something more along these lines, North – a novel published by Ray McAllister’s own Beach Glass Books publishing company – might be right up your autumnal alley.

Written by local author, award-winning playwright, and longtime poet Roy Robbins, North is smooth, engaging, and, quite often, hard to put down.

When things in a small town go awry…

The story centers around Hal Parker, a market research executive and recent divorcé. After the death of his aging mother, Hal returns to his childhood town of North, Florida – the kind of rural community where most residents have stayed their entire lives, and absolutely everybody knows everybody.

Incidentally, Hal’s arrival (and his mother’s death) coincides with the sudden murder of Leon Putnam, the town’s very wealthy and very notorious politician – killed by a “single blow to the head.” Though just there to tend to some post-mortem business on behalf of his mother, Hal inevitably gets pulled into the tangled web of small town politics; especially since Leon’s death is only the beginning of mysterious occurrences.

The plot gains momentum and zest after the arrival of Claire Austen, a Boston reporter in town to find out more about Putnam’s murder – who also just so happens to be a love interest of Hal’s.

As Hal is forced back into the small town that he’s left, he’s also forced to face the people and the memories that he once tried to flee; and he gets caught up in the town’s scandalous mysteries in the process.

More than just another a murder mystery

But North is not merely a “whodunnit” kind of novel. Yes, the murder and other mysteries that follow are the main plot point; but the small town setting adds a layer of interest and charm to the storyline.

It paints a thorough and realistic picture of the ups and downs of rural Americana; everything between the conflicts with drugs; to the infamous rumor mill; to the deep-rooted and tight-knit relationships hard to find in any other type of community.

The characters and their backstories spice up the plot with interesting twists, turns, and, of course, gossip. From nosy neighbors to childhood frenemies, the characters may even seem hauntingly similar to those who grew up in a comparable setting.

At just over 200 pages and easy to follow, North is ideal for a lazy evening at home or cozy weekend vacation. Despite the subtle typos and minor inconsistencies, this small-town mystery has just enough intrigue and lighthearted spunk to keep the pages consistently turning.