C-Dorys Cruise the James and Chickahominy

In The Wake of John Smith 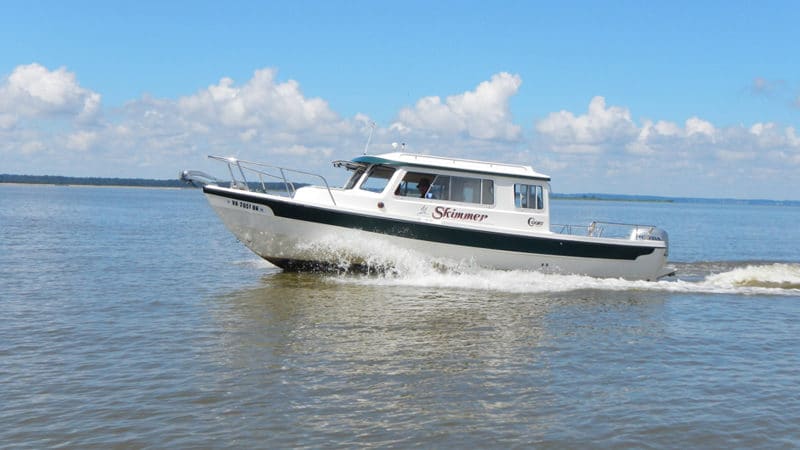 In July 2014, seven C-Dorys boats cruised from Portsmouth to Jordan Point near Richmond. A C-Dory is a small, 16- to 26-foot, shallow-draft cruising boat. A group of C-Dory owners, the C-Brats, coordinates cruises and gatherings throughout the country. A cruise up the James River from Portsmouth to Richmond was a natural because of the appeal of the area, the availability of marinas and the ability to accomplish the trip in a couple of days. It also was the setting for John Smith’s early explorations of Virginia. Despite frequent spring rains and heavy flooding of the James River in 2014, the cruise was set for July.

Boater Robert McGinness accompanied C-Dory owner Lou Schiavo, who lives in Richmond, to crew on his boat, Skimmer, for the trip.

We watched with delight as a pair of skimmers – our boat’s namesake – sliced the water looking for dinner. The black skimmer feeds flying low over the water skimming for small fish or insects. We watched this pair glide alongside each other back and forth across the creek until happy hour distracted us.

This was the night before our departure, moored on Lilly Creek in Portsmouth, Virginia, which flows through a quiet residential neighborhood into Western Branch. The rain fell on a light tidal current and created a design of circles on the brown water. After a month of rain and a few days of torrential downpour, more rain threatened. Still, we were ready to get underway for our trip up the James.

Pandy Girl’s skipper spoke for us all before turning in. “It is nice to have the C-Dory’s enclosed cabin so we can cruise – rain or shine.”

The next morning, we followed Osprey and Pandy Girl, both 22-foot C-Dory’s, out of the creek and into Western Branch. We cruised past Craney Island across the Elizabeth River from the city of Norfolk. When they named the area, early English settlers mistook the great numbers of white egrets and blue herons they saw here for cranes. An impressive number of cranes still inhabit the area, but these are all man-made. Coal pier and Navy fueling station cranes rise above the horizon, reminding us of the industrial nature of the harbor.

The Gosport Shipyard was building ships in 1767 on the western bank of the Elizabeth River. It was here that the Confederate States rebuilt the USS Merrimac into one of the first ironclad vessels, the CSS Virginia. On March 8, 1862, the CSS Virginia cruised out along our same track to take control of the federal fleet. When it returned the next day to finish the job, the Union ironclad, the USS Monitor, was waiting.

John Smith saw this area for the first time in the spring of 1607. He arrived aboard Christopher Newport’s flagship, the Susan Constant.

Once under the James River Bridge we turned toward the south side of the river. The rest of our flotilla joined us. Together we moseyed up the Pagan River toward Smithfield.

Our column consisted of four 22-foot and two 25-foot C-Dory boats and one 28 foot “sea dory” named RiverHorse and built by the owner. These boats are easily towed. They arrived from all over Virginia, North Carolina and Maryland to join those based in Tidewater and Richmond.

From the James River to Smithfield, the Pagan River wanders through a large expanse of wetlands and marsh. The Smithfield Station Marina borders a large meander of the river, and the outgoing tidal currents at the pier were tricky this morning. There was no lack of help and we tied up quickly. One behind the other, we docked next to the pool.

Captain John Smith traded with the Warrosquyoacke Tribe near here during that first summer of 1607 and again in 1608.

The skies cleared long enough for us to wander around the Smithfield historic district, admiring the exceptional architecture from the Colonial, Federal and Victorian periods. We missed by one day the birthday party celebrating the museum’s “oldest edible cured ham in existence.”

After dinner at Smithfield Station, we convened a trip meeting. Before the C-Brat gossip was out of the way, the skies opened up. The downpour and accompanying thunder was deafening. We adjourned to our dry cabins for the night.

The C-Dory website says, “The C-Dory 22’ and 25’ cruising models are built to be easily maintained, seaworthy, and comfortable. The flat bottom, “V” bow, and heavy plank lines on the side give it a salty appearance. Although low in appearance, the cabin of both models has over six feet of headroom.” Some of the boats in our group have installed cabin air conditioning and cockpit canvas.

John Smith led two major voyages of exploration in the area in 1607 and 1608. Both voyages took place in June, July, and August – without air conditioning and with little protection from the sun.

Underway in a slight haze the next morning we passed historic Jamestown. A week after the First Landing here, on May 14, 1607, Captain Smith and twenty others set out up the James River. Like us, they wanted to explore the upper reaches of the river.

The Paspahegh Indians lived at the mouth of the Chickahominy. They were the first to trade with the English settlers. John Smith’s account reflects his distrust: “In my return [to the] Paspahegh, I traded with that churlish and treacherous nation … they were ready to assault us, yet … would meet with us with corn and trade.”

At the mouth of the Chickahominy River today there is a 140-acre park. It provides swimming pools, a boat ramp, a fishing pier, camp sites, a playground, picnic shelters and a small store. The store continues to trade in corn: corn chips and corn nuts.

The Chickahominy is clear and wide. It may have looked much the same to Smith: little development, and green and marshy on both sides. We saw eagles and osprey hunting on the river. Egrets and herons waded along the banks.

Before dinner at The Blue Heron Restaurant at River’s Rest Marina and Resort, we cruised on RiverHorse to where Chief Powhatan captured John Smith in December 1607. John Smith had pushed to the head of navigation of the Chickahominy. Powhatan captured and held him for six weeks. They took him on a tour of the area, and at some point he met Pocahontas.

On our return to River’s Rest, a storm blew in. In the span of a few minutes a sunny afternoon turned into a torrential downpour with no visibility. By the time we docked, the afternoon sunlight was once again dazzling and the flotilla happy hour was already in progress.

The next day, as we continued up the James, we experienced the effects of rain and the continued intermittent downpours.

The James River is wide and wooded. Many of the James River plantations and other park lands border the river, including Brandon, Kittiewan, Westover and Flowerdew Hundred. The combined effect is to keep the James River unexpectedly sylvan in appearance.

Since the middle of June, a month before our trip, the news media reported accounts of high water on the upper James. The river level flooded six feet above normal in downtown Richmond. During our trip, the river was muddy and full of debris and logs, and we kept a constant lookout for all sorts of floating rubbish, wooden construction materials and large trees. We had planned to cruise up to Richmond but with the narrow river close to flooding and the amount of debris we encountered, we changed our plans.

RiverHorse pushed upriver above Hopewell into the Appomattox River. The rest of us put into Jordan Point Yacht Haven where a short walk took us to the Dockside Restaurant for dinner. John Smith made it upriver as far as Richmond. A good restaurant sidetracked us.

The next morning, Pandy Girl’s skipper noted, “We left Jordan Point this morning, heading back down the James River, some trash in the water but ran out of it in about two miles. This was the longest one-day run of about 60 miles. The river was unbelievably flat all the way, looking like a sheet of glass.”

In 1608, John Smith led two expeditions from Jamestown through Hampton Roads to explore and map the Chesapeake Bay. That June, he and his men explored the lower Chesapeake and the Eastern Shore. In July, he set out again. He stuck to the western shore and explored the Patuxent, the Rappahannock and the Piankatank.