Four Small Town Boys Who Made It to the Big Time 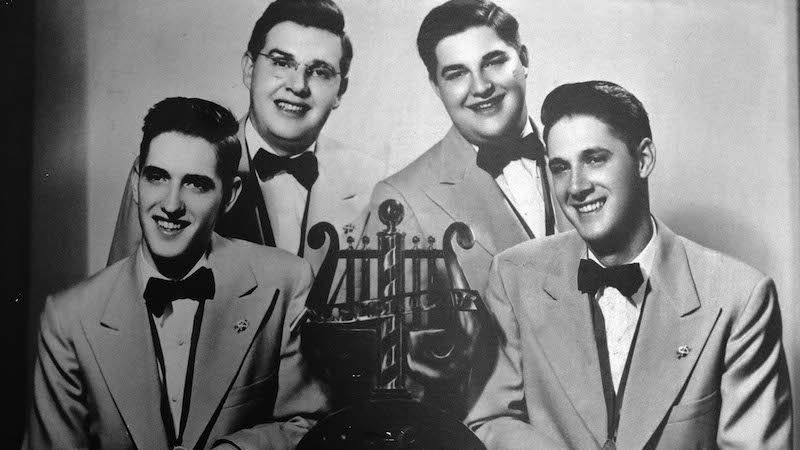 Seventy years ago, the four Schmitt Brothers from Two Rivers, Wisconsin, electrified audiences with their sublime harmonies, winning an international contest on the first try and skyrocketing to the big time. Soon they were singing on Ed Sullivan, Arthur Godfrey and Lawrence Welk. They performed at Madison Square Garden, Carnegie Hall and the nation’s other top venues. This is their amazing story.

Chosen Last Every Time, the Schmitts Come in First

After winning local and regional competitions, 40 quartets earned the right to compete in the two-day international contest in Toledo in front of arguably the most discerning audiences in the country. Performance order was chosen at random, and the Schmitt Brothers came in last every time.

Singing last in the preliminaries, last in the semifinals and last in the finals, the four unknown songsters stood backstage, nervously waiting for the judges to announce the winner as 8,000 conventioneers eagerly awaited the decision. They felt lucky to be in the final five. One by one, the fifth-, fourth- and third-place winners ran up the ramp to the stage. Only when the second-place quartet left them standing alone did they realize, “We WON!”

“Don’t tell me what to do!” Paul sniffed. “What do you think you’re doing?”

The Schmitt Brothers won the SPEBSQSA international title in 1951. (For those who don’t recognize the lengthy moniker, it’s the Society for the Preservation and Encouragement of Barber Shop Quartet Singing in America.) It was just the beginning.

Jim, Joe, Paul and Fran Schmitt grew up in a family of 17 and learned to sing in the church choir. The first contest they won was not in front of a crowd of thousands but on the local radio station in nearby Manitowoc. With the youngest just four years old, the boys won five dollars singing “That Silver-haired Daddy of Mine.”

O.H. “King” Cole discovered the quartet by chance when their melodies caught his ear one Christmas at the Hotel Manitowoc. King Cole was the father of Chordette Virginia Cole Osborn and also happened to be the president of SPEBSQSA. He invited the Schmitts to join the Manitowoc barbershop chapter, where they met future coaches Milt Detjen and Johnny Means. Within 18 months, they mastered the challenging techniques of the uniquely American a cappella style, winning every contest on the road to the championship.

Traveling Along, Singing a Song

The Schmitt Brothers sang together for 35 years. Their debut at Carnegie Hall – where they would take the stage five times during their career – was nearly derailed by a crustacean. Arriving late, Joe apologized, admitting that he didn’t know it would take so long to prepare his second lobster. When they showed up to compete in the Lions Club International Quartet Contest in New York City, every other quartet dropped out on the spot, conceding that the Schmitt Brothers would win anyhow.

Performances – which reached as high as 135 in 1953 – were routinely booked years in advance. With all the engagements they accepted, the quartet turned down many others, including trips to Europe, Hawaii and the Far East as well as an opportunity to audition for “The Music Man” on Broadway. However, they cherished their two-week trip to entertain the troops in Alaska. They “traveled along singing a song,” logging more than 2 million miles and performing in 3,000 programs.

Despite their amazing success, winning was hard work. With chapter meetings every Tuesday, lessons in Milwaukee every Wednesday, and performances Friday, Saturday and Sunday, the Schmitt Brothers were seldom home. Despite the hardship, their wives supported their husbands – while raising 35 children among the four families. They were the quartet’s biggest fans.

The Magic of The Schmitt Brothers Barbershop Quartet

For those who had the opportunity to hear them live, it was evident how much they enjoyed singing together. As they leaned in or swayed back, the brothers blended and balanced their harmonies. Eyes closed or slightly open, they concentrated on each note. The Schmitt Brothers perfectly blended delicate tones, delivering booming crescendos and cascading decrescendos. And as the last chord rang, elated smiles spread warmly across their faces. The thundering applause was a bonus.

The Schmitt Brothers recorded 10 albums, and their Greatest Hits is still available today on Spotify and Apple Music. They truly enjoyed singing together and generously shared their talents. The magic of their singing brought harmony and joy to all who heard them.