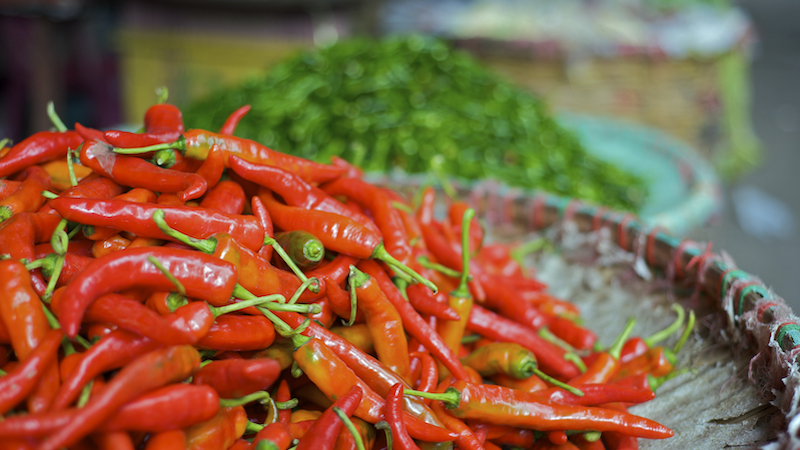 Did you know that chili peppers are good for you? Did you know that they aren’t related to “pepper,” and that they found their way to Asia and Africa and India from the New World? Lori Zanteson of Environmental Nutrition looks at these peppers’ health benefits – as well as their spicy taste.

The chili pepper was named “pepper” by Christopher Columbus on a Caribbean exploration when he assumed, based on the spicy hot taste, it was related to black pepper. There’s no relation, but the name stuck. Once their culinary potential became known, they became a welcome stand-in for the very costly black peppercorns. Soon after Columbus brought them home to Spain, chili peppers were being cultivated from Africa and India to Asia and the Middle East.

The hundreds of different types of chili peppers are part of the Capsicum genus. The five domesticated species are divided into three main groupings: bell peppers, sweet peppers, and hot peppers. Common varieties include red or green bell peppers, jalapeños and Anaheim, as well as the lesser-known naga and piri piri. The pepper’s heat, which is most potent in the seeds and white pith, comes from capsaicin, a powerful antioxidant phytochemical associated with many health benefits. Chili peppers are especially high in vitamin C, providing more than 100% DV (DV=Daily Value, based on 2,000 calories/day) in just one tiny pepper.

Chili peppers are high in the plant compound, capsaicin, which has been linked to many health benefits, including anti-cancer properties, cardiovascular protection, and longer life. According to a study published in a 2021 journal, Annals of Medicine and Surgery, which analyzed nearly 7,000 chili pepper studies that included more than 570,000 people, those who consumed chili peppers had a significantly lower risk of cardiovascular and cancer-related deaths compared to people who didn’t consume them.

Deep, vibrant color, and smooth, shiny skin indicates a fresh pepper. Color is also important in choosing the most flavorful dried chili peppers. Fresh peppers store well in a paper bag in the refrigerator vegetable drawer where they should last at least a week. Keep dried peppers in a sealed container away from sunlight. Dried and ground peppers are available in the spice aisle as well. Use them to kick up the flavor and spice in sautéed vegetables, omelets, and in baked savory breads and biscuits. They’re especially suited to ethnic dishes like Thai curries, Indian dal, and Mexican tacos.

Another look at the health boost from chili peppers