Add taste, kick, and healthy goodness with one magic ingredient 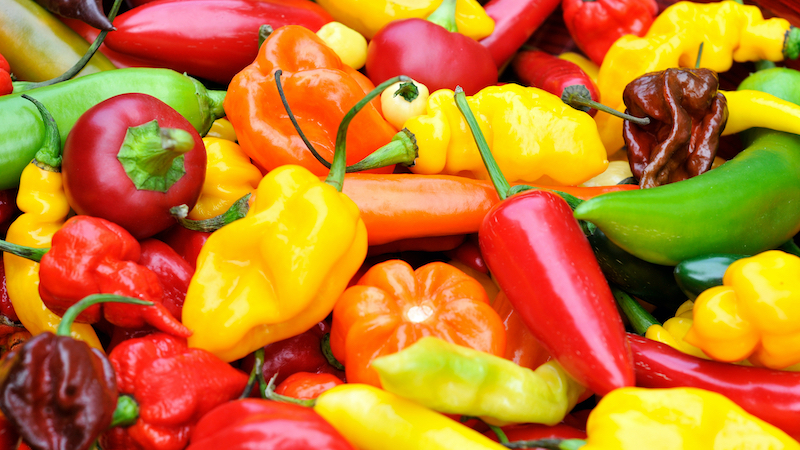 Chili peppers, a fixture in many worldwide cuisines, certainly add taste and kick to dishes. Research has found that you can also get a health boost from chili peppers!

If you’ve spent any time traveling around the globe, your burning lips are a testament that chili peppers have become a fixture of so many different cuisines. A papaya salad from a Thai food market or a fragrant curry dished out by a roadside restaurant in southern India wouldn’t be the same without their fiery kick. Street tacos in Mexico would be too tame if they didn’t induce a few drops of sweat.

Chili peppers – from jalapeños to volcano-like habaneros – will not only dial up the excitement of nearly any dish they touch, they can also turn up the heat on your health. Dare we say that research suggests hot peppers may literally be the “spice of life” by improving longevity.

The science behind the health boost from chili peppers

A recent investigation from the American Heart Association found that people who regularly eat chili peppers are 26% less likely to die of heart disease and had a 23% lower chance of dying of cancer than everyone else. This was echoed by a report in the journal PLOS ONE using data from the National Health and Nutritional Examination Survey that discovered U.S. adults who ate the most chili peppers had a 13 percent lower risk for premature mortality from maladies like cardiovascular disease than those who ate none.

While these studies cannot prove cause and effect, nor did they nail down how many or which chili peppers lower the risk the most, it’s believed that capsaicin – the naturally occurring compound that gives chilies their fiery kick – can help improve health measures by potentially reducing inflammation in the body. Capsaicin has antimicrobial activities that may also help bolster lifespan.

A study in the journal Hypertension discovered that people who ate more chili-laced cuisine typically preferred less salty foods and consumed less salt overall, which could have benefits for blood pressure control.

Spicy foods might trick the brain into thinking food is saltier than it actually is. A sriracha habit may also help people better manage their body weight, as it’s been shown that exposure to capsaicin can raise one’s metabolic rate and also rein in appetite, which may trim overall calorie intake. That said, the impact peppers have on body composition is likely minor compared to healthy eating in general and regular exercise.

12 foods with more vitamin c than oranges … including peppers

Capsaicin content of peppers is measured in Scoville heat units (SHU). The higher the number, the more perspiration it may induce. If you are easing into the world of chili peppers, it can be a good idea to start with peppers that rank on the lower end of the SHU scale and then work up from there. And start looking for ways to work more peppers into your diet, including soups, curries, salsas, and sauces.