Pull out your holiday list and find your frenemies 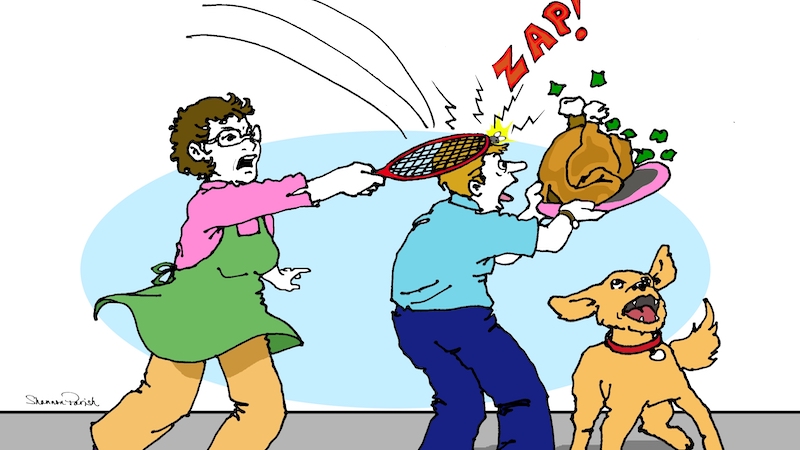 Electric flyswatters are all the buzz for gift giving. Writer Nick Thomas provides a tongue-in-cheek look at the gizmos, with firsthand experience to support his recommendations.

Back in 2020, a bizarre news story described a man in France who, while in pursuit of an annoying fly, apparently ignited leaking gas with a spark from an electric flyswatter and demolished part of his home in the resulting explosion.

My mother also detested the flying nuisances in the house, especially when they inevitably circled our table just as the food arrived. While she wielded the traditional plastic flyswatter with laser-like precision, she was not opposed to emptying half a can of fly spray in the dining room, killing both an elusive fly and our tastebuds under an aerosolized cloud of insecticide.

The commercial flyswatter originated in 1900 when an Illinois man patented a consumer version, while the high-tech electric swatter is generally credited to a Taiwanese inventor in the mid-1990s. As discoveries go, the printing press, electric light bulb, and wheel are often cited among humanity’s best. Perhaps. But you can’t take down a single house bug with any of them.

Despite my mother’s aversion to fancy gadgets, when electric swatters became popular in the late ’90s, I bought several and presented her with one for Christmas. A simple device delivering up to 3,000 volts, the low current makes them harmless to humans although they can deliver a surprising jolt. Shaped like a mini tennis racket, you simply push a button on the handle just before making contact with the aerial invader resulting in a loud and satisfying ‘zap!’ as it plummets earthward on its dying scorched descent.

Mom toyed with her new device a few times that Christmas, but after accidentally zapping another family member, the shock was too much – for both of them – so we encouraged her to resume her traditional insect massacring methods. Although contemporary models include a safety mesh preventing human contact with the wiring, I continue to brandish my original electronic bug slayer with delight and still consider it one of the most ingenious household inventions.

However, I rarely use mine for flies, which only make sporadic appearances around mealtime. Apparently, they have no taste for my cooking. But I have found the electric swatter quite useful on larger airborne pests such as wasps, immobilizing them to make removal quite efficient. They are also effective on cockroaches, notoriously difficult to catch as they speed skate across a surface to elude capture.

Of course, if you’re fast enough, you can always impede a roach’s progress with a regular flyswatter or other heavy weapon in hand, but they tend to ‘explode’ when whacked, discharging a mass of insect entrails that can turn even the most robust stomach. But after one touch from the nifty zapper, the stunned roaches can be easily scooped up for disposal.

While bugs may be less common in December, that hasn’t prevented me from giving more as Christmas gifts over the years. With the exception of my mother, most recipients have safely added them to their bug-fighting arsenal throughout the year.

We lost Mom some time ago, but she would have surely applauded that Frenchman’s dedication to fly eradication (while scolding his failure to recognize gas seepage). I’m convinced if there were flies in heaven when she arrived, it’s a no-fly zone now.