The Meaning of European Walls 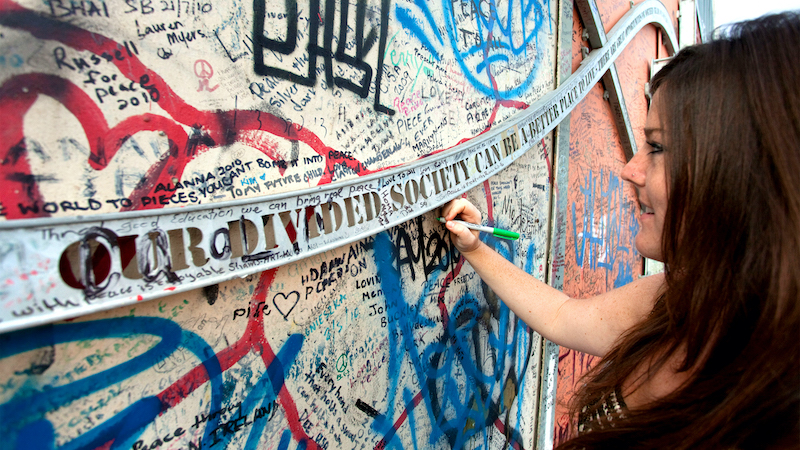 In Rick Steves’ Europe, the travel writer examines the context of several significant European walls: built in times of mistrust and danger, torn down to be replaced with interdependence and empathy.

Europe has built more than its share of walls. From Hadrian’s Wall (constructed by the ancient Romans to defend the northern boundary of Britannia) to the Maginot Line (built by the French in the 1930s to keep out the Germans), these European walls were symbols not of strength, but of mistrust and insecurity. They were necessary back then. But the promising news in our age has been a European society that is advancing – dismantling walls so that it can move forward. With the fall of the Iron Curtain and the rise of the European Union, walls and border checks have been replaced by free trade, free travel, and the Erasmus Program – a well-funded government initiative that subsidizes students and teachers working and learning in neighboring countries. Europe’s key to a wall-free world: interdependent economies and lots of travel, which encourages empathy.

At one point or another, most of Europe’s great cities – Paris, London, Rome, Florence, Milan, Barcelona, Vienna – were contained within walls, constructed during ancient and medieval times to defend against invaders. Many of these walls were torn down long ago as cities expanded beyond their historic centers and land was opened up for grand circular boulevards. Some intact walls have been preserved in places like Dubrovnik, Croatia; Rothenburg, Germany; York, England; Lucca, Italy; and Carcassonne, France. In each case, these walls have become people-friendly, park-like spaces where people stroll, gather, and enjoy the view.

Some walls seem to survive to take us back in time. One of my favorites, Hadrian’s Wall, is the remains of the fortification the Romans built nearly 2,000 years ago in Britain. Now in ruins, this great stone wall once stretched 73 miles from coast to coast across the narrowest part of northern England, where Britannia ended and the barbarian land that would someday be Scotland began. More than just a wall, it was a cleverly designed military rampart manned by 20,000 troops. At every mile there was a small fort guarding a gate. Imagine the bleakness of being a young Roman soldier stationed here 18 centuries ago. Today, two of these Hadrian Wall forts have been turned into museums, where visitors can see the ruins up close, view ancient artifacts, and get a sense of life in the distant past of a desolate corner of the Roman Empire.

Hadrian’s Wall is much-loved by hikers, who follow the wall as it meanders up and down the natural contours of the land. I grabbed a sunny late afternoon to hike the wall. Scrambling along Roman ruins, all alone with the wind and the sheep, I took a moment to simply absorb the setting. I surveyed vast expanses from a rocky crag that seemed to rip across the island like some horrific geological violence, frozen in mid-action.

The meaning of European walls

Some walls have become museums and memorials, designed to inspire us to relate to our neighbors in ways that make them obsolete. The most poignant wall experiences focus on Europe’s recent past. Thankfully, walls that once stood for fear and intolerance now symbolize peace and progress.

During the Troubles, the 30-year conflict that wracked Northern Ireland, so-called “peace walls” went up in Belfast to separate its sectarian communities: Catholics, in favor of a united Ireland, and Protestants, in favor of staying in the United Kingdom. Today, instead of separating its warring tribes, these walls are a tourist attraction. Visitors from around the world decorate the walls with colorful messages of hope and thanksgiving that the bombs and killing that came with the Troubles are no more.

Europe’s most famous wall is the Berlin Wall, designed not to defend against invaders but to keep residents from escaping. Built in 1961, this 96-mile-long barrier encircled West Berlin, making it an island of freedom in communist East Germany. When the wall fell on Nov. 9, 1989, Europe enjoyed its happiest day since the end of World War II. In the euphoria that followed, “wall peckers” giddily chipped the Berlin Wall to smithereens. A surviving stretch of the wall has been preserved as a memorial to the victims of the Cold War. It’s a long, narrow park stretching from a museum and viewing tower. What was once the notorious “death strip,” with a deadly obstacle course of barbed wire and tire-spike strips, is now dotted with personal memorials and informational displays. That no-man’s-land between East and West is now an everyman’s land, famous for hosting the world’s biggest karaoke party. And the long-hated wall has become a concrete canvas for graffiti artists – a people’s gallery celebrating freedom.

Europe’s walls were built for a reason. But, as travelers learn, the true success of a society lies in finding a way beyond walls. If you look at European currency, you notice that bills feature bridges, not walls. And so do the dreams of great leaders.