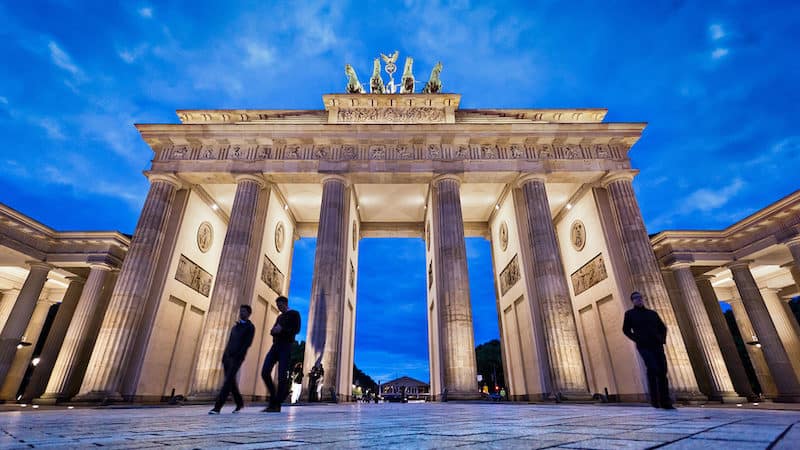 As we’ve had to postpone our travels because of the pandemic, I believe a weekly dose of travel dreaming can be good medicine. Here are some of my favorite European memories from Berlin – a reminder of the learning adventures that await us at the other end of this crisis.

I have a powerful image stuck in my mind of Berlin – bombed to rubble in 1945 and then divided by its notorious wall during the Cold War – as a city emblematic of the defeat of fascism and communism in Europe and a victory dance of capitalism and freedom.

Like ancient Romans keeping a few vanquished barbarians in cages for locals to spit at, capitalism and the West flaunt victory in Berlin. Slices of the Berlin Wall hang like scalps at the gate to the Sony Center, the audacious office park at Potsdamer Platz.

A sleek Radisson hotel now stands on the place where the old leading hotel of East Berlin once stood. I remember staying there during the Cold War, when a West German five-mark coin changed on the black market would get me and my friends drinks all night. Now five euros barely buys me a beer, and the lobby of the Radisson hosts an exotic fish tank the size of a grain silo with an elevator right in the middle, zipping scenically up eight floors. Next door, the DDR Museum is filled mostly with East German tourists rummaging through the nostalgia on display from their parents’ dreary lives under communism.

Across the street, statues of Marx and Lenin (nicknamed “the Pensioners” by locals) look wistfully at the huge TV tower East Berlin built under communism. It had a fancy bar on top, but the best thing East Berliners could say about it back then was, “It’s so tall that if it falls, we’ll have an elevator to freedom.”

Memorials to the past

The victory party rages on at Checkpoint Charlie. With every visit, I remember my spooky first time there in 1971, when tour buses returning to the West were emptied at the border so mirrors could be rolled under the bus to see if anyone was trying to escape with us.

Now, a generation later, Checkpoint Charlie is a capitalist sideshow. Lowlife characters sell fake bits of the wall, WWII-vintage gas masks, and DDR medals. Two actors dressed as American soldiers stand between big American flags and among sandbags at the rebuilt checkpoint, making their living posing for tourists. Across the street at “Snack Point Charlie,” someone sipping a Coke says to me, “When serious becomes kitsch, you know it’s over.”

Standing at the historic Brandenburg Gate, I face Berlin’s fashionable new heart: Pariser Platz. Within about 100 yards of this square – once a vacant lot along the Berlin Wall and now a festive gathering place that seems designed to celebrate freedom – is a poignant collection of sights.

There are many memorials, including one to the 6 million murdered Jews of Europe and another to the first victims of Hitler: 96 men, the German equivalent of congressmen, who spoke out in the name of democracy against his rule in the early 1930s. They were sent to concentration camps, where they were eventually killed. Nearby is the American embassy, famous for taking security concerns to new heights. Across from a very busy Starbucks is one of the “ghost” subway stations that went unused through the Cold War and now feels like a 1930’s time warp. And the glass dome capping the bombed-out Reichstag is where, on the rooftop on May Day 1945, Russian troops quelled a furious Nazi last stand. The nearby hills were created entirely with the rubble of a city bombed nearly flat about 70 years ago. Considering all this, the clash of history and today’s vibrant city is almost overwhelming.

Tucked away nearby is the Kennedys Museum, filled with JFK lore, including the handwritten note with the phonetics for his famous Berlin speech. Reading it, I can hear his voice: “eesh been ein Bear-lee-ner” (“I am a Berliner”).

With the amazing story of Berlin swirling through my head, I wave down a cab and hop in. I use the opportunity to get a local’s perspective and ask the driver if he is a Berliner. When he turns to me, I realize he’s Turkish, which makes me feel a little foolish. Then, making me feel foolish for feeling foolish, he says, “I’ve lived here 31 years. If Kennedy, after one day, could say ‘Ich bin ein Berliner,’ then I guess I can say I am a Berliner, too.”